The Vermilion City Gym is the third Pokemon Gym in Kanto. The only prerequisite for entering is to teach your Partner Pokemon ‘Chop Down’ from the captain of the S.S. Anne. The Vermilion Pokemon Gym specializes in the electric-type, which is only weak to ground-type attacks. In fact, ground-type Pokemon like Geodude and Diglett are completely immune to electric-type attacks!

There are three Pokemon Trainers in this gym. Battle all three to earn a total of P4,576.

After the battles, investigate the trash cans around the gym. The goal is to look for two switches to take down the electric barrier to the gym leader. These switches should be right next to each other. 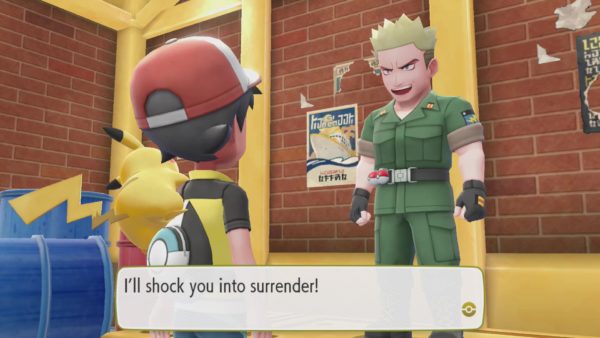 Defeat Lt. Surge to receive P4,160, TM36 Thunderbolt, the Thunder Badge, and Lt Surge’s Autograph. Return to Vermilion City to find Misty at the center of town. She’ll restore your team’s health and ask to guide you to Diglett’s Cave. That’s the way towards the next objective, but you can also capture more Pokemon and battle more Trainers on Route 11.