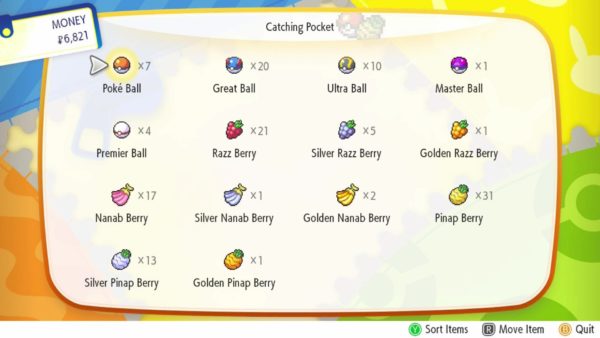 The catching pocket of the item bag holds Poke Balls and Berries, both are used for catching wild Pokemon in Let’s Go Pikachu and Let’s Go Eevee.

Poke Balls are the items that are used to capture Pokemon. They will be placed in the Capture Pocket of the bag. Great Balls and Ultra Balls have a better capture rate than regular Poke Balls, but are more expensive. The Master Ball is the only Ball with a 100% capture rate, but players only receive one per game!

As you clear Pokemon Gyms the other Poke Ball types will become available for purchase at all Poke Marts. A ton of Poke Balls will be rewards for defeating Pokemon Trainers.

Additionally, 10 Poke Balls can be obtained for free from a man in Mt. Moon, Rock Tunnel, Seafoam Islands, and Victory Road if you are nearly running out of regular Poke Balls. Use this to practice catching Pokemon, as you can get infinite Poke Balls!

In Pokemon Let’s Go Pikachu and Let’s Go Eevee, berries are used to make Pokemon easier to capture and to feed your partner Pokemon.

Berries can be obtained after capturing Pokemon, or by investigating patches of grass around Kanto. Many are hidden along the lengthy Pokemon Road, and more can be found in the spotlights of Cerulean Cave. All berries will be placed in the capture pocket of your bag.