Fishing is a mini-game that requires a Side Quest to do. Unfortunately, you can’t go out and buy a fishing rod, you’ll have to find parts to assemble one yourself.

Fishing will make time pass by, like many other events. To fish, use bread crumbs from Shiroku Pub or Bugs from the Shrine.

Getting a Fishing Rod

Take these bugs (Tatsuhime Ladybugs) to Shiroku Pub at night (along with a jewel/gem) and feed the woman’s fish the bug from your inventory. You will get a fish hook.

Take this fish hook to the man at the Riverbank at Samegawa Flood Plain and he will give you a rod. 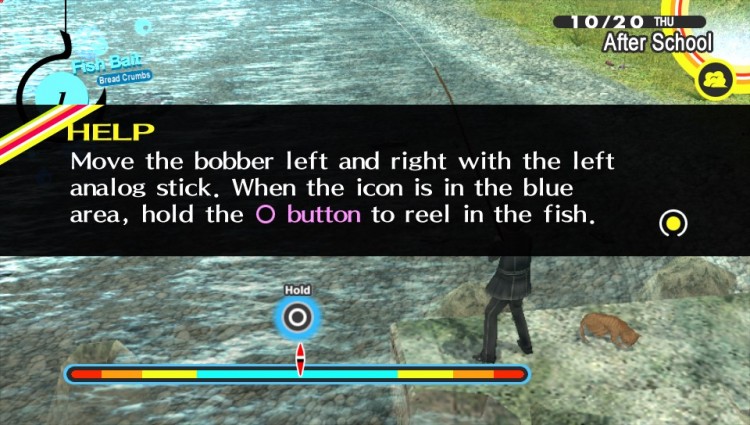 With the right bait, head to the Samegawa Flood Plain to fish. Choose one piece of bait and wait for your bobble to go under water. When it’s under water, a short mini-game will play out. Use the left analog stick to keep in the blue section (middle) of a meter. When in the blue section, press the Circle Button to start reeling in.

Fish can be used as items, fed to cats around town, used as parts of quests, or traded with a woman at the Shrine at night for a Gem.

You must also be able to reach Shichiri Beach on your scooter. In order to reach the beach, you’ll need to have unlocked Okina City already. Then, choose to “take a long ride” 3 times and on your third ride, you’ll wind up at the beach. Your courage must be high enough to take long rides.

Once you’ve unlocked the beach, choose the “Fish” option at the beach. You will find that your rod will not work in the sea. Go back to the Old Man at the Riverbank and he’ll challenge you to catch the Samegawa Guardian.

To catch this fish, you’ll need the Inaba Jewel Beetle as bait, which you can catch at the Tatsuhime Shrine or in your garden during winter. You can only catch the fish when it’s raining or snowing! You’ll know it’s the Guardian the second you throw it in the water by the ripples. If there is a large, resonating splash upwards from the surface, you’ve got him hooked. If there is no splash, press Circle to reel it in without forfeiting your bait and re-cast with the Inaba Jewel Beetle again.

Once you’ve caught the River Guardian, go to the Old Man at the Riverbank and show him the Samegawa Guardian to receive your Deep Sea Rod.

To catch the Sea Guardian itself, you’ll need to have the bait Genji Beetle’. You can purchase 2 of these beetles from Tanaka’s Amazing Commodities on August 22nd (8/22), or just catch them like the other bugs.

It doesn’t have to be raining or snowing in order to catch the Sea Guardian at Shichiri Beach, but it will allow you to get it on the hook a lot more easily. Use the Genji Beetle (although the game will only tell you that you will attract Maguro Tuna). You’ll know it’s the Guardian the second you throw it in the water by the ripples. If there is a large, resonating splash upwards from the surface, you’ve got him hooked. If there is no splash, press Circle to reel it in without forfeiting your bait and re-cast with the Genji Beetle again.

You might want to save the fish rather than sell it or something so you can easily complete the Hermit Social Link.