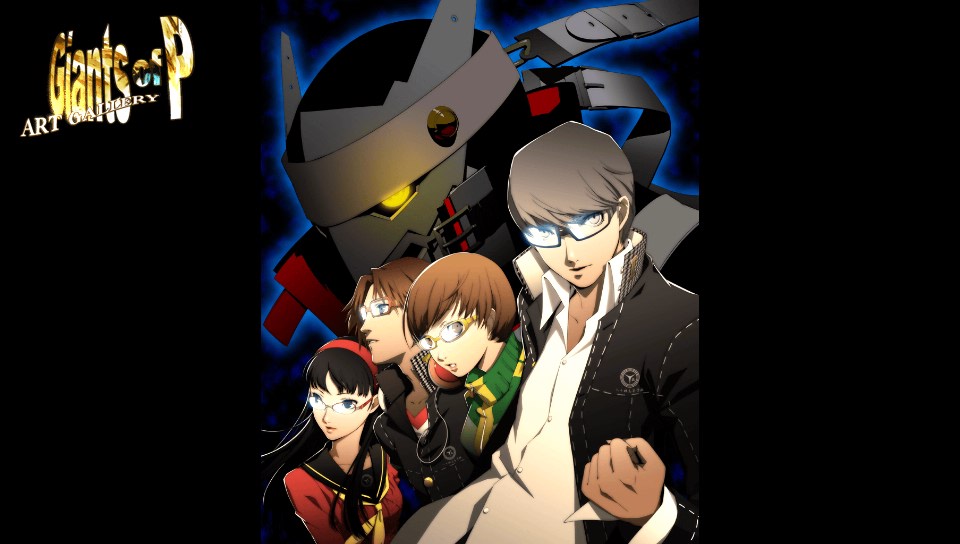 Persona are the creatures this series spotlights! Use them to battle shadows in the shadow world, or keep them alongside the Protagonist to help max out Social Links. Each main character in the group has their own Persona that will be “reborn” to a newer, stronger Persona once their Social Link is maxed out at level 10. The Protagonist can use 206 different Persona!

Izanagi is the very first Persona the protagonist will unlock. All other Persona must be obtained after battle through Shuffle Time or by Fusing Persona together in the Velvet Room. Once a Persona is accepted into the Protagonist’s heart by selecting their card, it will be automatically added to the Persona Compendium. The Protagonist can hold up to 12 Persona at a time at max level. If there is no more room for a new Persona, one can be dismissed to accept the new creature. The amount of Persona you can hold at one time depends on the Protagonist’s level.

All of the personas are connected to one of the 24 different Arcana. The name of these Arcana do not necessarily have any bearing on which Personas are categorized within them; however, there are some commonalities within groupings. 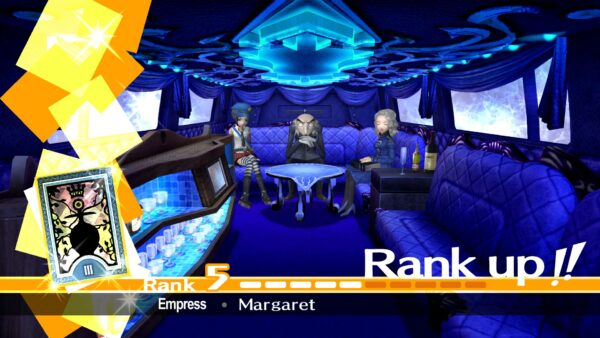 Each Arcana is tied to a Social Link you can establish in the game. Improve the Social Link to get an EXP Boost when fusing Persona of the same Arcana. For example: Yosuke is connected to the Magician Arcana. If Yosuke’s Social Link reaches rank 8, any Persona that is fused together to become a Persona of the magician arcana will level up 8 times.

Each Arcana must be maxed out to Rank 10 in order to receive a special key item. This key item will allow you to fuse the strongest Persona of that Arcana. That means you must max out all social links to fully register all Persona. This can be done over multiple play throughs if using New Game Plus. 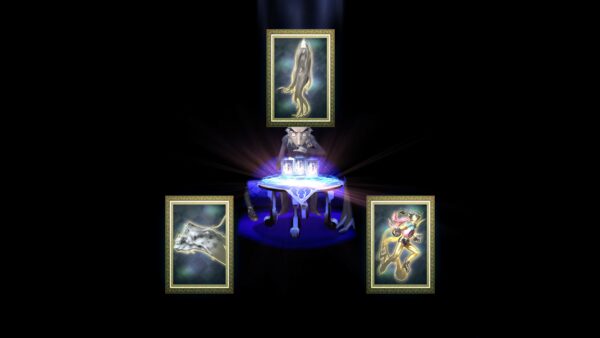 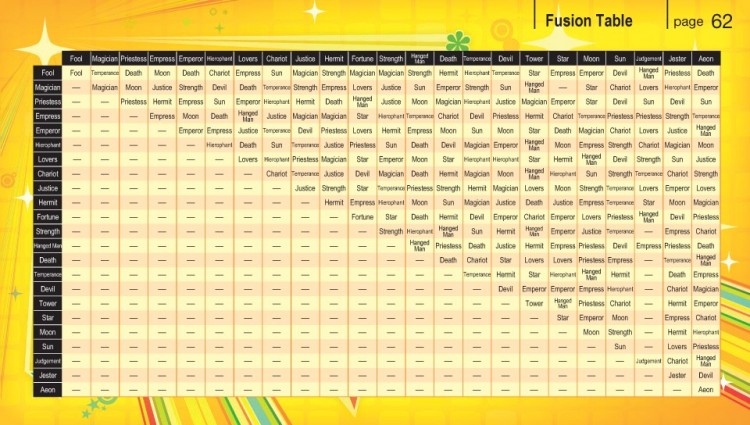 Igor will allow you to Fuse Personas in The Velvet Room. Present him with either two or three cards to create one new Persona. Starting July 10th, Igor will allow you to fuse four, five, or six Personas into one, called Cross-, Pentagonal-, and Hexagonal-fusion, respectively. Unlike the fusion with two or three cards, only select Persona can be used in advanced fusion to create specific Persona. 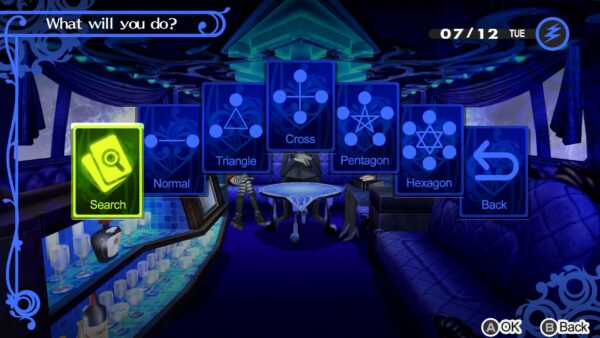 However, as concrete as the options may appear, Fusion is not an absolute process. An “accident” can happen. When a fusion accident occurs, you will not fuse the Persona you might have been anticipating, so be sure to save your game before you fuse too many high-leveled Persona. The first time an accident occurs, you receive the The Nose Doesn’t Always Know trophy. 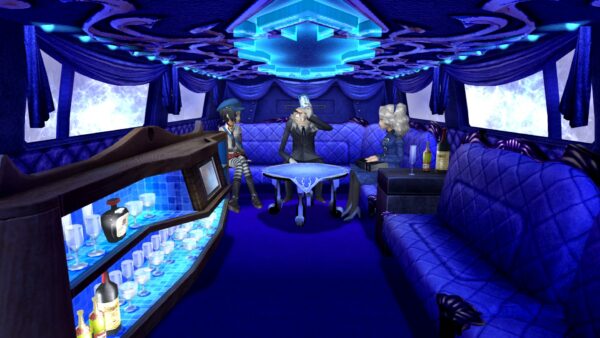 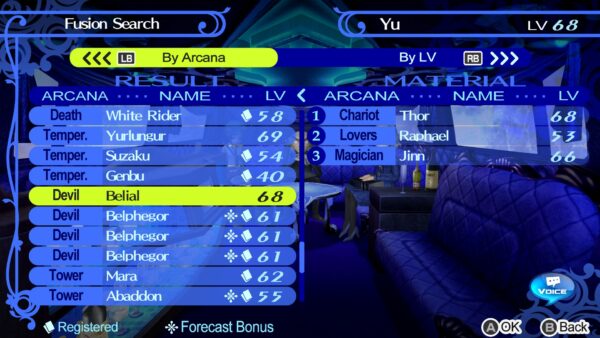 Before fusing, you can check the Fusion Forecast in the Fuse menu of the Velvet Room. The Fusion Forecast shows bonuses that will be granted to newly-fused Personas. Sometimes a requirement must be met before this bonus is given, and sometimes it will be given to all Personas that are fused. Only the current day and the next day will be shown in the forecast at any given time.

Persona can be manually registered by speaking with Margaret in the Velvet Room. Make sure to do this after going through a dungeon and leveling up a Persona! Registering a Persona will allow you to recall that Persona with the same stats, levels, and skills at a later date. Recalling a Persona from the Persona Compendium will cost a specific amount of money. The higher the level of the Persona, the more Yen you must spend. Register more Persona to earn a key item that grants you a discount when recalling Persona:

Each Persona has their own status screen. The screen will show their affinity to the eight different types of attacks.

Each of these attacks can have one of five effects on a Persona and the character currently holding the Persona. These effects are:

Not only are affinities changed for the player holding the Persona, but so are their stats.

Each Persona can learn a total of eight skills. More skills can be taught as a Persona levels up. Each of your friends’ Persona can also gain a new skill at select Social Link ranks.

Additionally, Skill Cards can be picked up during Shuffle Time in a dungeon. A Skill Card will allow you to teach a single attack to a single Persona in the Protagonist’s inventory, it will not work for the other main characters. The skill will be semi-random when obtained from Shuffle Time, though better skills will show up in later dungeons. Give a Skill Card to Marie to register the card in the Skill Library. Doing so will allow you to buy that particular Skill Card multiple times. Using a Skill Card will consume the item, so make sure it’s registered before using the item on a Persona!

Skill Cards can also be obtained from a Persona’s current skills if the attack has a card icon. Drive to Chagall Cafe in Okina City with that Persona equipped and pay 5,000 Yen. At the end of the day, you’ll receive a skill card from the equipped Persona if it has a skill with a card icon.

From time to time, you may find a friend near the Gas Station in the Central Shopping District during the day. They won’t have an exclamation mark above their head, but you can still talk and spend the day with them. Doing so should take you to a hot spring.

There will be two options available while at the Hot Spring, each with their own purpose:

Here is a list of all Persona available in Persona 4 Golden in Alphabetical Order. There are a total of 206 Persona, not including the Persona unique to the other characters. All must be obtained to complete the Persona Compendium and earn a Trophy.