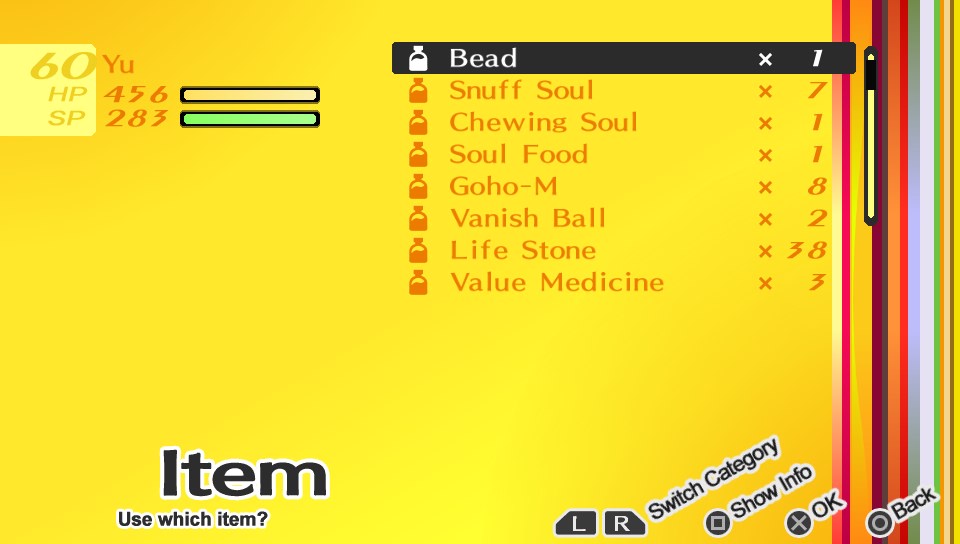 This page lists all available items in Persona 4 Golden. In the game, all items will be dumped in one big menu. To make things easier to find, I split up all items into several sections, such as healing items, dungeon items, battle items, skill cards, materials, and gems.

Items can be found through Exploring Dungeons, completing Side Quests, winning Battles, or simply from buying them at Shiroku Store in Shopping District, South. 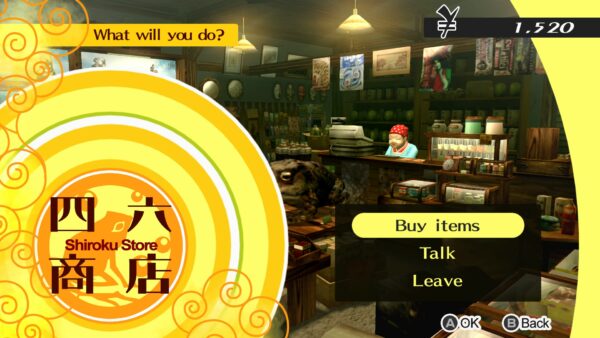 There are a number of Healing Items in Persona 4. Some restore HP, some restore SP, some revive allies, and some heal Status Ailments.

Battle Items are items that can only be used while in a Battle against Shadows in The TV World. Some cause damage to Shadows, and some help allies.

These items can be found in Treasure Chests inside The TV World, won after battle, or bought fro the Shiroku Store in the Central Shopping District.

Dungeon Items are items that can only be used while in a “Dungeon” in The TV World. These can be obtained from Chests in Dungeons, the Shiroku Store in the Central Shopping District, and from defeating Shadows.

Skill Cards can be obtained randomly at the end of battles during Shuffle Times. They can also be obtained by drinking Coffee in Okina City with a Persona that knows a technique with a skill card icon.

Each skill card can be used to teach the Protagonist’s Personas a new technique. Make note: skill cards are one-time use items, and teaching a new attack will consume the card. Additionally, skill cards can be added to a registry in The Velvet Room. You will not receive anything for giving Marie your skill cards, but you will be able to buy as many of that skill card as you wish. The better the skill, the higher the price.

Materials are items obtained after winning battles. They only have two purposes: completing certain Side Quests or selling to Daidara Metal Works in the Central Shopping District. Selling these Materials will allow Daidara to create new Weapons, Armor, or Accessories depending on which piece of material was sold.

Gems are special items obtained after winning battles. Unlike Materials, Gems serve another purpose other than being sold. Trade these Gems with the old lady at the Shiroku Pub to obtain new weapons. The Shiroku Pub is the same building as the Shiroku Store, but it’s only open during the evening.

Gems can also be obtained from the Lady in White at Tatsuhime Shrine at night once you have given her enough of the fish she requests.