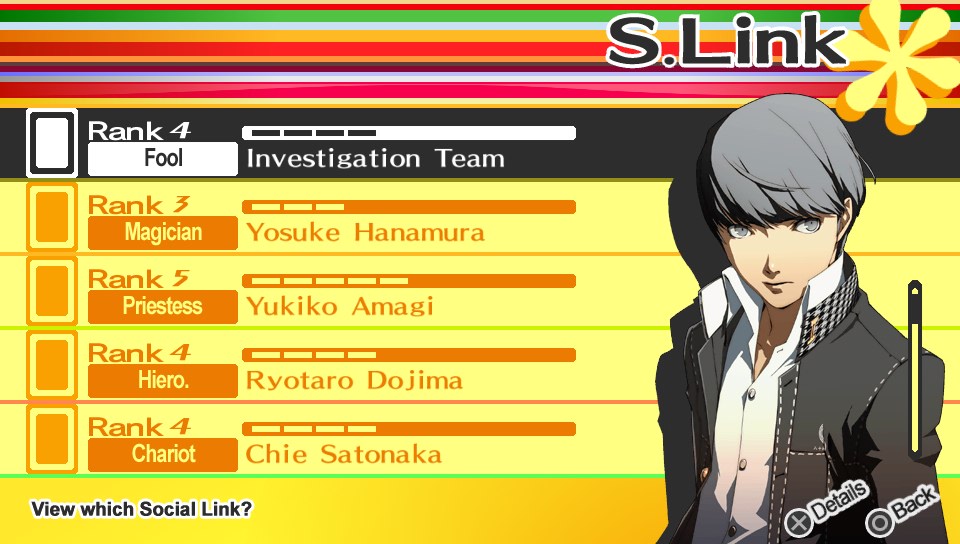 Social Links are special bonds formed between the Protagonist and other characters in the game. Forming these bonds will allow you to gain more power when Fusing Personas, gain new Skills, gain new abilities in battle, and even enter Relationships!

Persona 4 Golden has a handful of Social Links available for you to level up and benefit from. Each Link can grow up to ten ranks, and the main party members can be met once more during the newly-added Winter Event. There are also a few new Social Links in Golden that were not in the original PS2 game.

Ranking Up a Social Link

It’s easy to realize spending time with other characters will increase a Social Link, but it’s actually a bit more complex than that.

There is a hidden meter in the game that counts for each rank up. Selecting a specific answer while spending time with a character will add points from 0-3 to this unseen meter. Having a Persona of the same Arcana will double those points as well, which is why you should always carry a Persona of the same Arcana when building a relationship quickly. For example: If you have a Priestess Persona while spending time with Yukiko, you can get double the points during the conversation. You can find these correct answers on each Arcana’s page.

If you want to spend time with a character, and the game says something like, “Your relationship is ready to become closer,” you’ll rank up no matter what, but you might not progress as far into the next rank as much as you could by giving the perfect answers. In other words, it won’t affect that rank you’ll be getting then and there, but for the next rank, you might have to spend time rather than getting a rank-up the next time you meet-up with that Social Link.

However, getting questions to rank up a social link isn’t always available. Sometimes a character can be found wandering around town, instead of at their usual spots. If you see them around town, spending time with them will most likely increase the friendship meter, but it won’t increase the rank. Only if the character has a “!” above their head can the rank possibly increase.

Just like real life, you can enter Intimate Relationships with the girls in Inaba. After obtaining a high enough Social Link with each girl, you will be given special options when spending time with them. The game should give a sort of warning before choosing the option to enter a relationship or stay friends. The first time you enter a relationship, you will earn A Special Lady trophy.

It’s possible to enter more than one relationship in a game, but that could come back to bite you in the behind when Valentine’s Day or Christmas comes rolling around.

Listed below will be the name of the person or group of the Social link, the Arcana type they favor, the location(s) they are found, and the earliest date you can start the social link. There are a total of 24 arcana that translate to Social Links. 22 arcana are tied to characters in Inaba, while the other two are related to group activities.