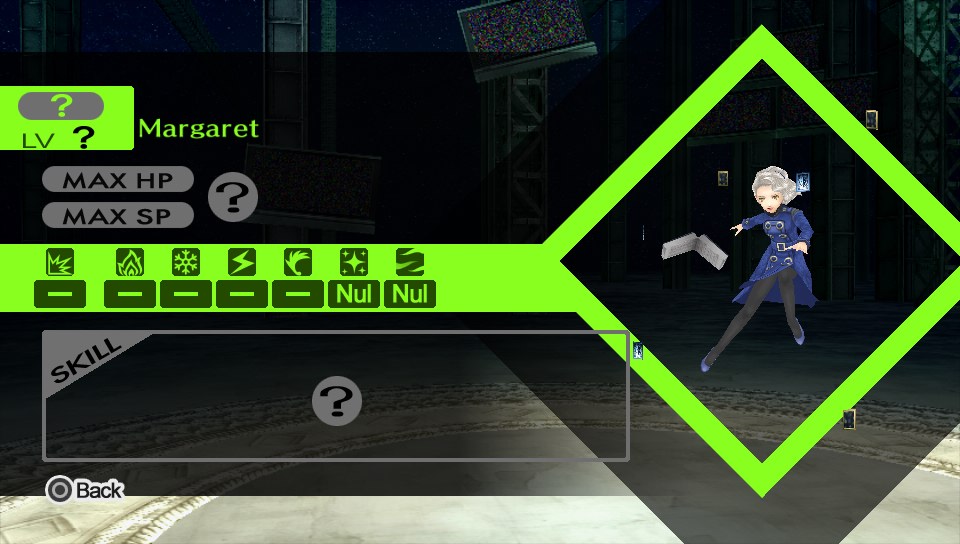 The battle with Margaret can only be attempted after several requirements have been met:

Once you have obtained the Orb of Sight from Igor, exit out of The Velvet Room and re-enter to find Margaret alone. She will give you the Aqua Invitation which says, “I will be waiting for you at Heaven’s end. – Margaret”

Head to Heaven before the final dungeon to find Margaret on the tenth floor. Don’t worry, no other bosses will be in the Dungeon.

Along with the damage each Skill may causes, all affinities other than Almighty, Darkness and Light will change.

Like most boss battle affinities, Margaret is neutral to all elements and will block Darkness and Light. The unique thing about this battle is the affinities will change based on the Skill / Persona she uses. The only things that will not change is Null to Darkness and Light, and neutral to Almighty. If she uses the plain Attack, there will be no change in affinities. However, if she uses an attack with the four basic elements, her resistance to that element will switch to drain. Do not reflect any of her elemental attacks! If you reflect the attack back at her, she will restore HP since her resistance is now drain. When it comes to Margaret using Almighty skills, all affinities will change to resistant (Str). When it comes to Margaret using Mind Charge, all affinities will switch to Null.

Margaret can attack twice during each turn. After several basic attacks, she will start using the elemental skills in the list above. The skills will go down the elemental line from Fire to Wind until she uses Megidolaon. Mind Charge will always go before Megidolaon, making it twice as powerful. If you see Mind Charge coming, or if the last attack was a Wind Skill, guard your team to lower damage.

The only time Megidolaon is not used after Mind Charge is after 50 turns. When Megidolaon is used that time, it will cause 9999 damage to every single party member. Hopefully the Lovers Social Link is maxed out, allowing Rise to revive you once during battle. End the fight before 100 turns!

Margaret is the toughest boss battle in the entire game. Do not even attempt this battle if you, your Personas, and your teammates aren’t around Level 90. Your party member’s Social Links should be maxed out, and their Personas should be on their third form. Try obtaining Legendary Weapons and Armor from The Reaper throughout the game to help out, but it may not be necessary on normal or lower difficulties.

When it comes to using certain party members or strategies, there are many different ways you can go. What is certain is all party members should be at max level to make things go smoothly, their Personas should be on their third form with great attacks, and the Protagonist should be using a number of Personas to debuff, attack, and defend.

Chie’s Dragon Hustle Skill will be great to buff the entire party, Kanji’s Primal Force is a great Physical Attack, and Yosuke’s Brave Blade is a great Physical attack. Elemental attacks can be iffy since Margaret’s affinities change so often. Don’t forget about items; bring a few Somas and other items to restore HP and SP if needed. If not, Yukiko or Teddie can be there to heal, but only take one.

In reality, if you’re playing Normal or lower, and Personas are in their 90s, a Defending Persona probably isn’t needed. Use Trumpeter to Debilitate Margaret (lower all stats), switch to Yoshitsune and Power Charge, and then use Hassou Tobi to deal massive damage. The Arms Master Skill paired with an Accessory that lowers the cost of Physical Skills would be great choices. All these Skills can naturally be learned through level progression with the exception of Enduring Soul on Izanagi-no-Okami. You will need a Skill Card for that, or max out the Lovers Social Link to have Rise revive you.

If you can critical hit Margaret, do not go for an All-Out Attack. Doing so will only cause a small amount of damage. Allow each player to attack while she’s downed to cause bonus damage. When she reaches half HP, she will fully restore herself with Diarahan and use Morning Star.

After Margaret’s health goes below 50% a second time, she will use Power Change and Hassou Tobi instead of Mind Charge and Megidolaon. It may only do light damage, but it hits eight times!