Getting to Zora’s Domain

There are four divine beasts at four different points on the map. I believe Vah Ruta in Zora’s Domain to the east is the second best to start with after Rito Village. It is located to the east of Lanayru Tower, and north of Mount Lanayru. It’s best to travel north of Kakariko Village to get there quickly. 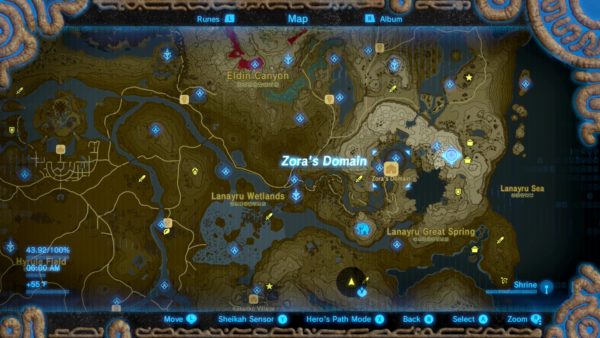 Rain will begin to fall as you get closer to Zora’s Domain. This will prevent you from climbing up the mountains and taking a shortcut. Stay on the main road, and while you cross Inogo Bridge you will meet Prince Sidon. He will ask for your help and give you an Electro Elixir, which provides two levels of shock resistance for six minutes. A number of enemies up ahead will use weapons imbued with electric power.

You will come across Lizalfos and Octorok in the first section. The Lizalfos can swim and walk on land. The Octorok here will either swim in the water or inflate themselves to float above the water’s surface. Electricity will spread in water to nearby enemies, causing them to drop their enemies and stand stunned for a few seconds.

Prince Sidon will talk to you from the river as you walk up a hill. Shortly after you will find a rock treasure chest surrounded by thorns. The only way to get to it is to set the thorns on fire. You can use a magical fire weapon or strike some flint with a metal weapon next to the thorns. It is possible to jump in the cavern from behind if you don’t have any fire weapons, but you will have to be agile to avoid the thorns. Inside the treasure chest is a Purple Rupee worth 50 rupees.

Continue on and you will come across an ambush of archers. Several Lizalfos will be waiting at high positions and shooting electric arrows. Now would be a good time to use the Electro Elixir to withstand the attacks. Counter-snipe them with your own bow and arrow.

Once again, Prince Sidon will call out to you from the river as you progress forward. The cliffs up ahead will come together to create a cavern. Inside are a number of electric keese hanging from the ceiling. Shoot them down with your bow and arrow, or throw a bomb rune.

Oren Bridge can be found down the road. Several camps of Lizalfos will be positioned around the area, so be prepared for more battles.

Luto’s Crossing is the next bridge on the main road. Prince Sidon will call out to you once again. Immediately after he finishes talking, a Moblin will come to attack. Aim for the head with your bow and arrow to knock him off his feet, then use power attacks with some of your best melee weapons.

Head up Ruto Mountain to meet your next opponent: an Electric Wizzrobe. These things can summon lightning bolts, which metal objects attract, and it can disappear for a few seconds. If you’ve upgraded your stasis rune, use it on the Wizzrobe and fire an arrow at its head. This will stun the enemy for a few seconds, allowing you to follow up with power attacks. You might even be able to pick up his electric rod if he drops it.

Now that you’re at the peak of Ruto Mountain, you can jump off and paraglide toward the Great Zora Bridge. This will allow you to avoid another battle with a Moblin on the way down. 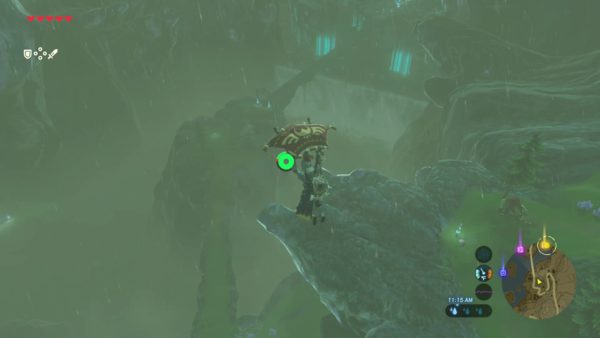 Zora’s Domain is a multi-leveled city set at the base of a waterfall. It even has its own waterfalls which can be climbed once you have obtained a piece of the Zora armor. The first thing you should do is interact with the Ne’ez Yohma Shrine so you have a quick travel point back here.

When walking around Zora’s Domain, you can find Fleet-Lotus Seeds around the shrine, Bright-Eyed Crab around the tall bridges, and Sneaky River Snails on the second floor pools of water.

To the left (north) of the shrine is the Seabed Inn, with a Cooking Pot at the entrance. You can rent a normal bed for 20 rupees or a blissful water bed for 80 rupees. Both will fully restore your health, but the blissful water bed will also add three extra hearts and an extra stamina wheel.

To the right (south) of the shrine is Marot Mart. This is the general shop that sells local material and arrows. Behind the general store is a workshop. Speak with Dento later in the game to create two Zora Tridents.

When you’re ready to continue with the story, speak with King Dorephan at the top of Zora’s Domain. The set of stairs near the entrance will take you to a floor filled with pools. A Goddess Statue can be found at the base of the stairs leading to the King’s room if you want to trade four spirit orbs for a heart container or stamina vessel.

King Dorephan will give you the Zora Armor. This increases your swim speed and allows you to swim up waterfalls! Muzu will storm off to the Mipha statue at the entrance. Speak with him to trigger a memory.

After the cut scene, equip the Zora armor and speak with Muzu again. He will tell you more Shock Arrows can be found atop Polymous Mountain. They are fired from a powerful beast called a Lynel. You need to gather at least 20 Shock Arrows before you can go to the Divine Beast.

Polymous Mountain is directly to the east of Zora’s Domain. The quickest way to get there is to ascend the waterfalls to the north. The area will be marked on your map for this quest.

The Lynel in this area is a very tough opponent. Make sure you save before getting too close. Of course, you do not have to fight the Lynel, only recover 20 shock arrows from the surrounding trees and rocks. This can be done by sneaking around and hiding from the beast. Also, try to get a picture of the Lynel with your camera for a side quest in Zora’s Domain.

The strategy I use when fighting Lynel is to aim for the head with bows and arrows, dodge its attacks as much as possible while locked on to counter with fury strikes, and use the Stasis + Rune to stop any of its strong attacks. Avoid using electric attacks, as most Lynel seem to be resistant to them.

Once you have collected 20 Shock Arrows, head to the new objective marker at East Reservoir Lake. Prince Sidon will be waiting to take you to the Divine Beast Vah Ruta.