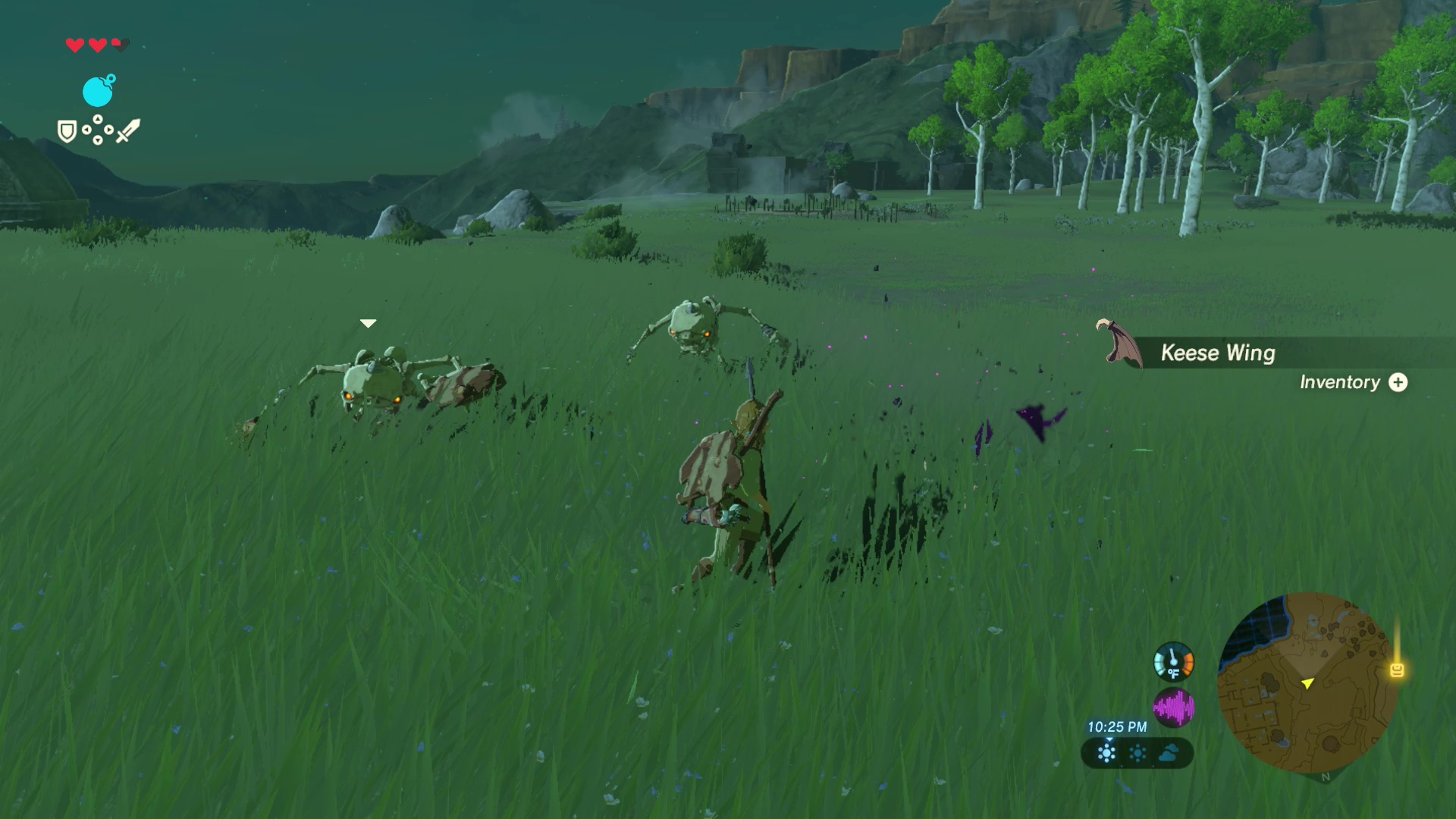 Monsters and the Blood Moon

The Legend of Zelda Breath of the Wild features a small number of monsters that roam Hyrule. However, the enemies increase in difficulty as progress is made and new areas are reached. The increase in difficulty is noted by their different colors and names: red (original), blue, black, stal- (skeletons), and silver.

Stal- creatures must be defeated a bit differently than living ones. After causing the skeletons to collapse, quickly chase the skull and attack it until the health meter depletes. Most times multiple undead monsters will be in close proximity, which means all of the monsters’ heads must be destroyed before the skeletons are destroyed.

Killing monsters and clearing camps around Hyrule is only temporary. Every so often, a blood moon will rise in the night sky. This crimson moon allows all defeated monsters to rise from the grave, filling all previously cleared regions. Try to avoid the wilderness or any camps while the blood moon rises if you don’t wish to fight a ton of monsters and harvest monster parts. 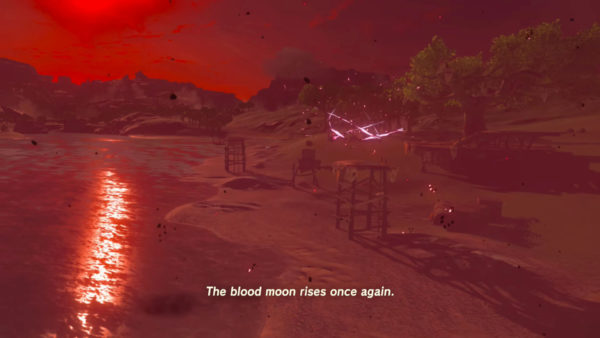 The blood moon will randomly appear; however, it will only be visible in the night sky between 9:00pm and 12:00am in-game time, but monsters will not arise until midnight. Try interacting with different NPCs or cooking while the red moon is active to discover different effects.

A medium-sized, humanoid creature that often attacks with clubs or bows and arrows. They have average speed and power. Bokoblin have alternate colors to show their difficulty.

A large, humanoid creature that often attacks with clubs and lances. They have high power and low speed. Moblins have alternate colors to show their difficulty.

A creature that looks like a ball of jelly. They are often very weak and slow, and can attack in swarms. Chuchu appear with different elemental properties.

A flying, bat-like creature. They are often very weak and slow, and can attack in swarms. Keese appear with different elemental properties.

A medium, lizard-humanoid creature that can attack with any sort of weapon. They are very fast, but have average power. Lizalfos have alternate colors to show their difficulty, and some appear with different elemental properties.

An ocotopus-like creature that buries itself in the ground or hides beneath the surface of the water. They pop out when least expected to shoot a rock from a distance. They are sneaky and can pack a punch, but don’t have the best defenses. Octorok appear with different elemental properties.

A humanoid creature that dances in the air. They attack using different elemental wands, and can disappear for a short time during battle. They are sneaky and strong. Approach them with caution, and aim for the head with your bow and arrow to stun them. Wizzrobe appear with different elemental properties. 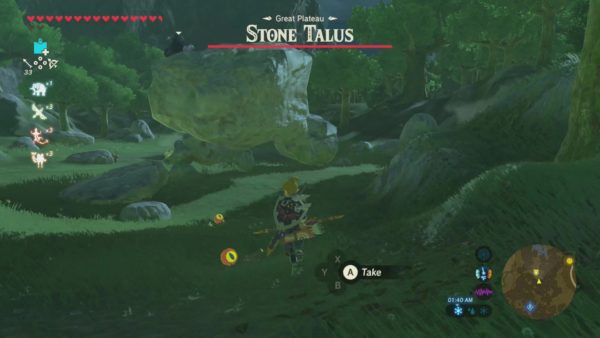 The average Stone Talus is actually very easy to defeat once decent armor and weapons are obtained. This monster will shoot its two arms directly at you, though it won’t move all that fast while doing so. Avoid its punches and try to climb onto its back. At the top-back region of the Talus is a black stone that looks like a mineral deposit. Attack this black stone with a smashing melee weapon to deal massive damage. Even shooting this weak spot with an arrow will stun the Talus for a moment and deal minor damage.

Talus imbued with fire and ice can also be found around Hyrule. These Igneo Talus and Frost Talus will cause additional elemental effects, and cannot be climbed or even touched until their element is laid dormant by hitting it with an opposite element. If it’s an ice Talus, use fire; and if it’s a fire Talus, use ice. 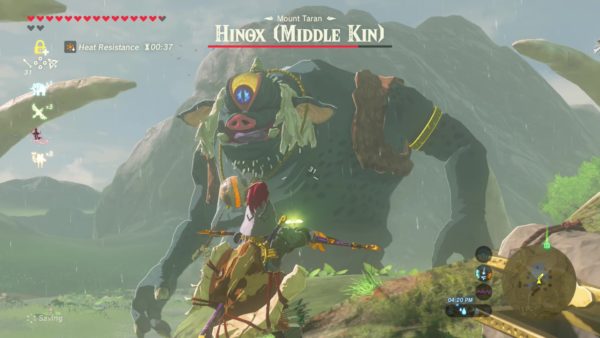 Hinox are large, cyclops monsters. They can be found sleeping on their backs around Hyrule. Sneak up to sleeping Hinox to perform a few attacks on their weaker gut. Using Stasis + while the Hinox is on its back is also very useful. Once the Hinox stands, minimal damage will be done to its legs and feet. The best option is to shoot an arrow directly into his eye, stunning the beast and leaving him open for attack to its stomach again. While the Hinox is sitting, the three weapons around its neck can be grabbed before the monster decides to use them.

As the battle goes on, the Hinox will attempt to shield its eye with one hand. Continue your attack at its legs if you can’t pull off a decent eye shot, but beware of the Hinox leaping in the air and landing on his backside, damaging anyone nearby. 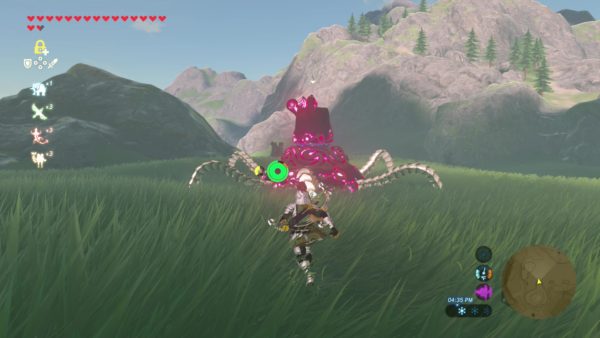 Guardians are the ancient machinery that can be found roaming Hyrule. The most common version is the Guardian Stalker, which looks similar to a spider or octopus. Their only attack is the guardian beam, which is shot directly from the single eye on the head of the machine. It will take several seconds to charge, and a laser beam will point directly at Link during this time. The beam attack will cause massive damage and set anything nearby on fire.

These machines can move quickly but they’ll keep a short enough distance from Link that he won’t be able to deal damage with melee attacks. Freeze Guardians momentarily with the Stasis + Rune, then attack their legs with weapons that use the same ancient technology, or use a melee weapon that cuts. The legs should snap off after a few hits.

With no where to go, the Guardian Stalker can only attack with their charge beam, similar to the Guardian Turrets. You can stop this attack and hit the Guardian’s weak spot by shooting an arrow into the eye the beam emanates from.

Another option is to use a perfect guard to send the beam back at the Guardian’s weak spot. To do this, equip any shield, hold it out in front of Link by holding L, and press the A button just before the beam makes contact with the shield. The Goron Champion’s Power will also automatically send the beam back to the Guardian without the need for pressing A at the right moment.

The Guardian Skywatcher is a flying version of the ancient machinery enemy. Similar to the other Guardians, a well-aimed arrow to its eye will stun it momentarily. The best way to take care of these beasts is to shoot their three rotors to land them on the ground. Once immobilized, attack head on until it’s defeated. 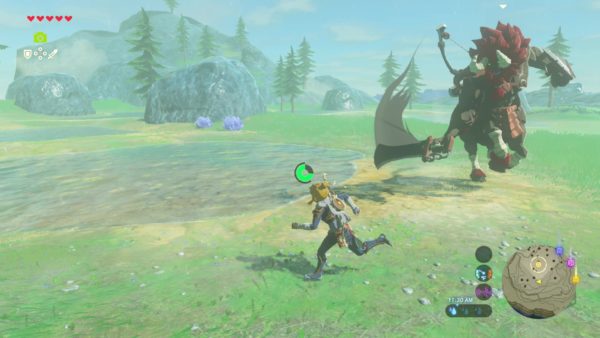 Lynels might be the toughest non-bosses in Breath of the Wild. They are centaur creatures that are incredibly fast and deal massive damage. They can attack from long range with bows that shoot multiple arrows at once, charge directly at Link to close the gap, and attack with large, crushing melee weapons.

The easiest way to deal with a Lynel is aim for the head with bows and arrows, dodge its attacks as much as possible and counter with fury strikes, and use the Stasis + Rune to stop any of its strong attacks. Avoid using electric attacks, as most Lynel seem to be resistant to them.

In addition to the other Monsters that appear in different forms around Hyrule, there is a tough creature that sometimes appears in the sands of the Gerudo Desert. It is a large, fish-like creature called the Modulga. They will attack from beneath the sand, making them nearly impossible to hit before you get back up on your feet. The best way to counter them is by using the Gerudo Champion’s special power by holding the Y button and releasing it. This attack deals massive damage to anything nearby.

While the Modulga is injured, it will be laying on its side on top of the sand. Use the Stasis + Rune to prevent it from burrowing back in the sand, then attack it as much as possible.