You begin the game just as Link awakens within a mysterious Shrine. Interact with the pedestal near the door to obtain the Sheikah Slate. This is the primary key item of the game, and looks just like the Nintendo Switch and Wii U Gamepad. 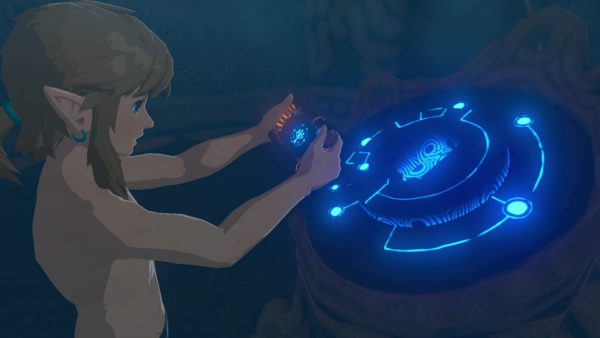 The door to the next room will open. Interact with the two treasure chests to obtain an Old Shirt and a pair of Well-Worn Trousers. Go into the inventory and equip them to get some base defense.

The final door in the Shrine of Resurrection is unlocked by interacting with a pedestal. This is how most doors and shrines will be opened throughout the game.

This entire first quest line is basically a set of tutorials. Now that you’re out in the world, grab anything and everything you see. Materials do not fill up your inventory, but weapons, bows, and shields do.

Walk down the path and speak with the old man near the fire. This man will give you a bit of information, and you can grab some useful items nearby such as Apples, a Torch, and even an Axe! Walk a short distance north and Link will hear a voice. This voice is none other than Zelda’s, who will give Link his first objective. Follow the yellow marker on the Sheikah Slate’s map.

The first quest will officially begin after Link hears Zelda’s voice. The objective is to reach the yellow marker and place your Sheikah Slate in the pedestal. Of course, there’s quite a distance between Link and the pedestal. It’s not necessary to go directly to the objective marker, and I highly encourage you to explore around. Pick up any materials, and investigate ruins for weapons and supplies.

There will be monsters prowling throughout the region, especially in the canyon east of the Temple of Time. Practice fighting the weaker monsters in the woods until you get the hang of battling and pick up a few health restoring items. Don’t forget to save often so you don’t get set back too far if you do happen to die, and it’s best to save before going into the aforementioned canyon east of the Temple of Time.

There are two small monster camps in the canyon, one a short distance from the bigger one inside the skull. You can either sneak up and aim for long distance head shots with the bow and arrow, or go in swinging whatever melee weapon you might have picked up. The Red Bokoblins are easy enough to defeat, but the Blue one will pose more of a threat. Read more about combat techniques in the basics section if you’re having trouble with fighting. Defeat all the Bokoblins to unlock a monster treasure chest within the large skull. These can be found withing monster camps throughout Hyrule.

Reach the yellow objective marker and interact with the pedestal to activate a Sheikah Tower. This will complete the first main quest of the game. Jump down each step until you reach the ground. The Old Man from earlier will fly in and give Link his second quest: The Isolated Plateau.