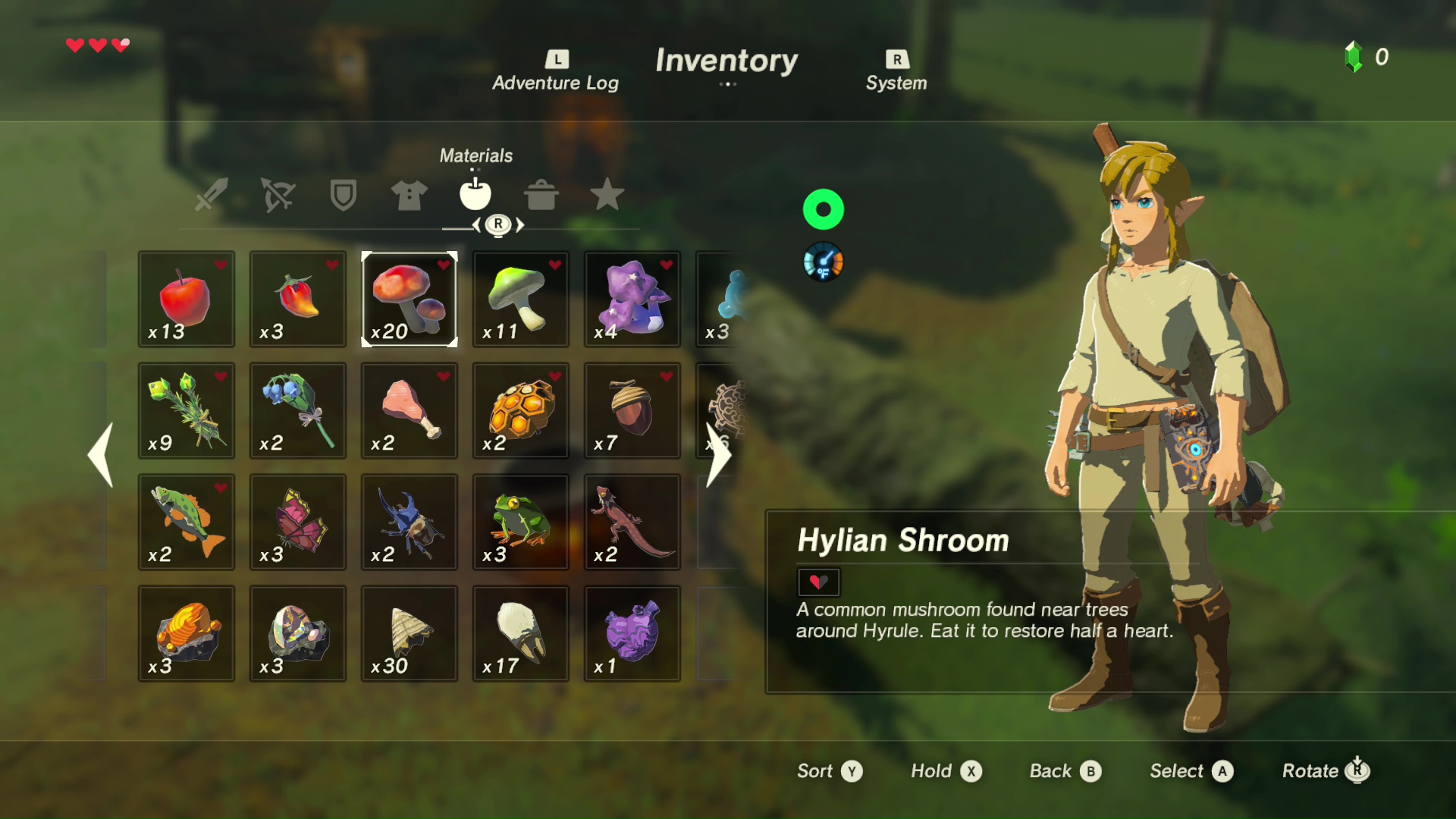 Home
The Legend of Zelda Breath of the Wild Walkthrough
Materials

While exploring Hyrule in Breath of the Wild, make sure to collect as many Materials as possible. Materials are very important items that are used to make food, elixirs, and upgrades to Armor and Runes. Don’t worry about filling up your inventory, because it’s not possible to do so with Materials alone.

The easiest materials to gather are natural resources such as plants. Various herbs, mushrooms, fruits, and vegetables will naturally grow around Hyrule. However, select produce only grow in specific regions.

Another natural resource that is easy to gather are minerals. When it comes to locating minerals, look for ore deposits on the sides of mountains – which look like large, black boulders. Sometimes the large, black boulders will have sparkly stones popping out the sides, which increases the chances of finding rare minerals. Smash ore deposits with heavy, two-handed weapons to yield valuable minerals. If a large weapon isn’t accessible, use the Bomb Rune and hope the minerals don’t go flying.

Additionally, Pebblits and Talus can be defeated to find more minerals. Use Minerals to upgrade armor and jewelry, or sell them to shops to make some quick money.

Many creatures can be found roaming throughout Hyrule in Breath of the Wild. These creatures aren’t just for show, but can be harvested for their meat. Sneak up and attack any creature to collect their materials. If you’re not fast enough, they might run away. Aim for the head on mammals and birds to stun them and inflict critical hit damage. Fish cannot be captured with fishing rods; instead, you must jump in the water and grab them (dashing helps). An easier option is to throw food in the water to use as bait. And the easiest option is to use the Bomb Rune to kill any fish in the blast zone. These materials are used to make food or upgrade armor.

In addition to the larger wildlife in Hyrule, Breath of the Wild features insects, frogs, and lizards and categorizes them as Critters. While the frogs and lizards can be shot with arrows to make them easier to collect, insects must be snuck up on and grabbed like seafood. Increase Link’s stealth by crouching, eating meals with stealth up effects, or by wearing the Stealth armor set. Once Link is close enough, the name of the material will pop up on screen alongside the button to gather the item. Critters are mixed with Monster Parts to make Elixirs, or they’re used to upgrade Armor.

The toughest material to collect in Breath of the Wild are Monster Parts. Fight and defeat monsters around Hyrule to earn a variety of materials. The loot will be randomly dropped once the monster is defeated, but it seems the tougher versions of a monster often drop the rare material. Monster Parts are mixed with Critters to make Elixirs, or they’re used to upgrade Armor.

Monsters aren’t the only threat in Breath of the Wild. Link also has to watch out for ancient machines called Guardians. Guardians will drop their own ancient materials, which can be used to upgrade Runes on the Sheikah Slate, to create Ancient Weapons and Armor in a lab at the northeast corner of the map, and to upgrade select pieces of Armor. The items are listed below from rarest to most common.