The Cerulean Cave, also known as the Unknown Dungeon, is the final area in Kanto. It’s a three level cave that’s home to the toughest wild Pokemon in the entire game. Not only that, but the strongest Pokemon in existence, the one that was written about in the Pokemon Mansion, can be found in the basement of this dungeon. Bring the Master Ball with you to catch it without any effort!

This dungeon can be found by going north of Cerulean City to Route 24, then surfing southwest towards Route 4. This cave can only be accessed after becoming the Pokemon League Champion.

All Pokemon found while fishing will be the same on each floor. However, the Pokemon encountered while walking will vary depending on the floor.

The majority of this dungeon walkthrough will be going back and forth between the first and second floors collecting items. There’s nothing special around the dungeon, like Technical Machines or key items, just healing items.

West of the entrance is a small river. Surf along this river until you reach a small hill leading to a Max Elixir.

Return to the river and surf westward until you reach another path going north. This path leads to a ladder, which will take you up to the second floor.

The is the first time you’ll see the maze-like second floor. Try to get used to this rock formation layout. From the ladder, follow the path to the northeast to find an Ultra Ball at a dead end. Walk towards the southwest corner of the floor next, then head east towards the next ladder. You might be able to find a Max Revive on the way.

You will now be back on the first floor. Surf along the body of water to the southeast. This route will take you to a Rare Candy in the corner of the cave. Return to the ladder and walk west to a hill. Climb up this hill and grab another Ultra Ball. Another ladder up to the second floor will be positioned in the southwest

After taking the previous ladder, you should now be on the northeastern corner of the first floor. Walk down the hill to the south to find a Max Revive, then follow the path to the west to a ladder. Take this ladder back up to the second floor.

This path is pretty simplistic. Follow the rocky road until you see the ladder; however, before taking the ladder back down, walk southward and pick up a Rare Candy. With the item safely in your bag, you can return to the first floor one last time.

Follow the short path around the rocks to the final ladder. This ladder will lead down to the basement of Cerulean Cave. The basement is a single, lengthy route that winds around the floor. Walk northeast to reach a Max Elixir in a corner.

Return to the fork in the road and walk south to another river. Use a Pokemon to surf westward, where an Ultra Ball and Max Revive will be waiting atop a hill.

Surf along the river to the northeast, climb up and down a hill near the northeastern corner, and then walk a few steps further east to find the last item of the game tucked away in a corner: an Ultra Ball.

Surf and hike your way to the southeast corner of the basement to find a legendary Pokemon. Make sure to save before interacting with it. 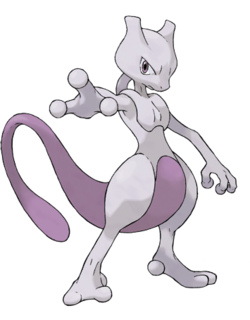 Once again, Mewtwo is the strongest Pokemon in Red, Green, Blue, and Yellow! It’s even stronger than the Pokemon it was born / cloned from: Mew. If you still have the Master Ball from Silph Co, use it now to catch this monster without breaking a sweat. However, if you lost or already used the Master Ball, you’ll have to rely on Ultra Balls. Reduce Mewtwo’s health to the lowest possible percentage and inflicting the sleep status condition to increase your chances of capture.