This is another Musical Easter Egg for Zombies. It can be found on the map “Shangri-La” by activating three meteorites. Press X (Xbox 360), Square (PS3), or F (PC) to activate each one. The song’s name is Pareidolia by Kevin Sherwood and Elena Siegman. The meteorites can be found at the following locations:

This Easter Egg is extremely long and REQUIRES four players for the time travel. Once completed, you will earn an achievement / trophy. It’s best to have all the doors open before you start. The power must be activated! You will eventually need Spikemores (two players will make it quicker) and the upgraded 31-79 JGb215. Remember to make a crawler before you do each step.

Just about all steps must be done in the past. To travel through time, each player must press a stone circle found around the Quick Revive machine at the same time. Press the activate button to press the stones in. Remember, the activate button is X (Xbox 360), Square (PS3), or F (PC). The time travel will only last for a few minutes, or until you complete a step. If you’re not sure if you ran out of time or if you completed the step, look for yellow radios around the map. A new one will pop up each time you complete a step. Each radio gives hints towards the next step. 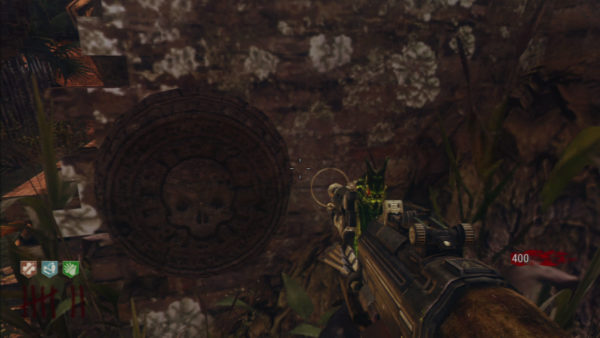 This step must be done in the past. Run over towards the MPL and look for a stone circle button, exactly like the ones to go back in time, on the side of the wall. Press it to bring up several stone tiles/plates on the floor near the MPL and near the PM63. One player must be near the MPL and one player must be near the PM63. When you stand near the plates, a symbol will glow on top of it. You must stand on the same plate as the other player to send them into the ground. Have on player find the symbol, tell the other player what symbol it is, and have both players stand on the plate. 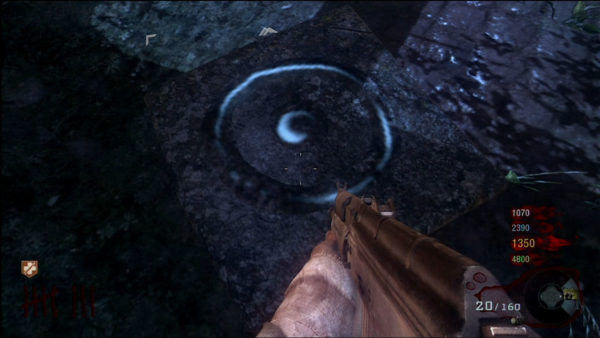 This step must be done in the past. Send three players to the room with the AK74u. Have them stand on a steel grate in the middle of the room. The fourth player must slide down the water slide near the waterfall to activate a lever on the right wall. It seems you don’t need to actually press anything, but you may need to stay up against the right wall.

This step must be done in the past. Head over to the waterslide near the waterfall. Look for a crystal ball at the top of the wall where the waterslide entrance is. Blow it down with a frag grenade or some other explosive. Once it’s down, have one of the players shrink it with the 31-79 JGb215. Push it into the water slide by knifing it, and follow it down into the AK74u room. Push the crystal into the geyser and activate it by stepping on top of the geyser. The Geyser will shoot the ball up into the crystal’s rightful spot. 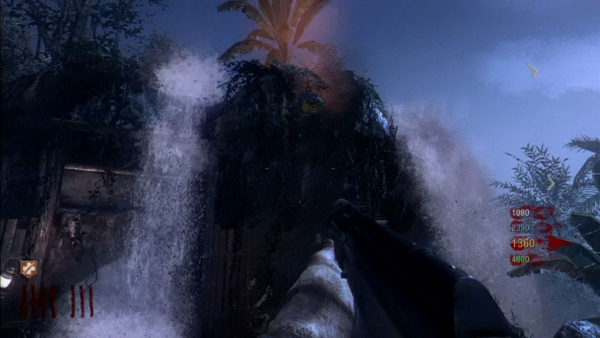 This step must be done in the past, and requires a live Napalm Zombie. Head over towards the MPL area and into the tunnels. Turn a valve on the wall – near the Pack-A-Punch stone pressure plate – four times by pressing the activate button. Have the Napalm Zombie follow you throughout the caves until he reaches the Power Switch Room. Once he reaches the room, you can kill him. Run back to the valve and pull a lever to the right of it. 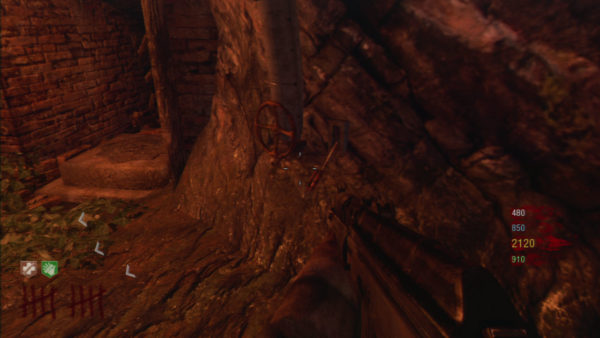 This step must be done in the past, and requires four Spikemores. Head over to the tunnel where the MP5K is located. Inside you will find four holes on the wall. Set up four spikemores to fire directly at the holes. You must get zombies to run past the Spikemores to activate them, shooting them will not work! Once all four holes are plugged, head towards the waterfall and press the button for the Reservoir Trap. The button is on the brick wall on a rock in the middle of the water.

This step must be done in the past. Twelve stone plates will be spread throughout the map. You must find all twelve plates and knife them to activate a glowing symbol.

Once all plates are activated, run over to the Mine Cart and look for a wooden trap-like thing in the jungle. You will not be able to stand next to it since it’s out of bounds. Throw an explosive – like a monkey bomb or frag – towards it until it blows up. 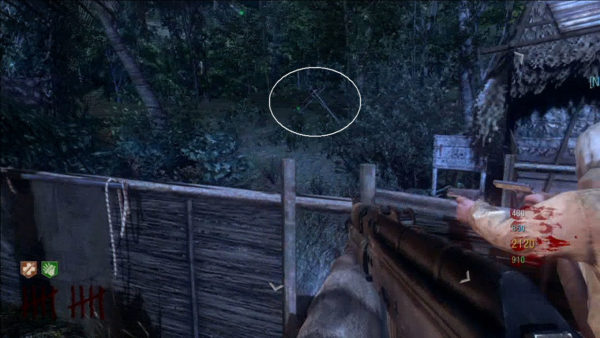 This step must be done in the past. Head over to the Mud Room and look for the four giant stone dials. Thing of the layout like this:

The dials must be set with the correct symbol at the top. They will be in this order, similar to the layout above: 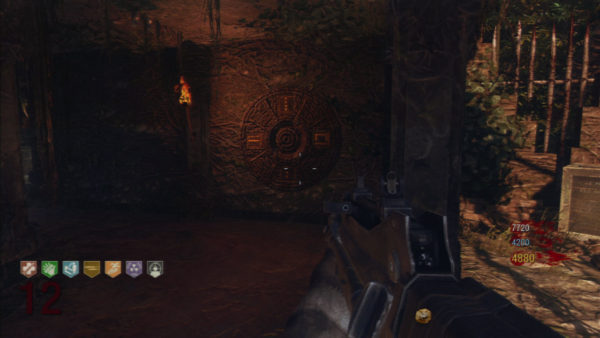 This step must be done in the past, and requires an upgraded 31-79 JGb215. First, you must hit four specific gongs. Some say the gongs are randomly selected. To figure out which is the right gong, have one player knife it and have the others look at the crystals above the Mine Cart/MPL area. If the crystals turn red, they’re the WRONG gongs. Knife the four gongs until the crystals glow with a Treyarch Symbol. Dynamite will fall down onto the player next to the glowing Crystal. Next, you must shoot the crystal above the mudroom with your upgraded 31-79 JGb215. If you hit it, the shot will hit the meteor above the Pack-A-Punch machine. Activate the Pack-A-Punch machine by stepping on all four pressure plates around the map. Walk up the stairs and give the dynamite to the people behind the wall. 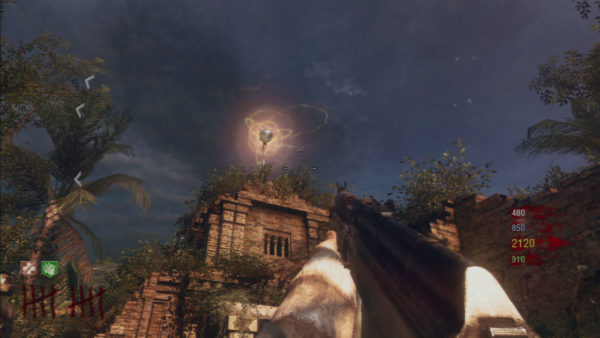 The final step is easy and must be done in the present. Activate the Pack-A-Punch by stepping on all four pressure plates, again. Walk up the stairs and grab the Focusing Stone. When the water pushes you back down, a radio will appear at the base. Listen to the radio to activate the time travel buttons for use, again. Now you can replay the entire Easter Egg so everyone can grab the Focusing Stone. Along with the Focusing Stone, the player who grabs it will get ALL Perks. The perks will not disappear, even if you are downed or die.