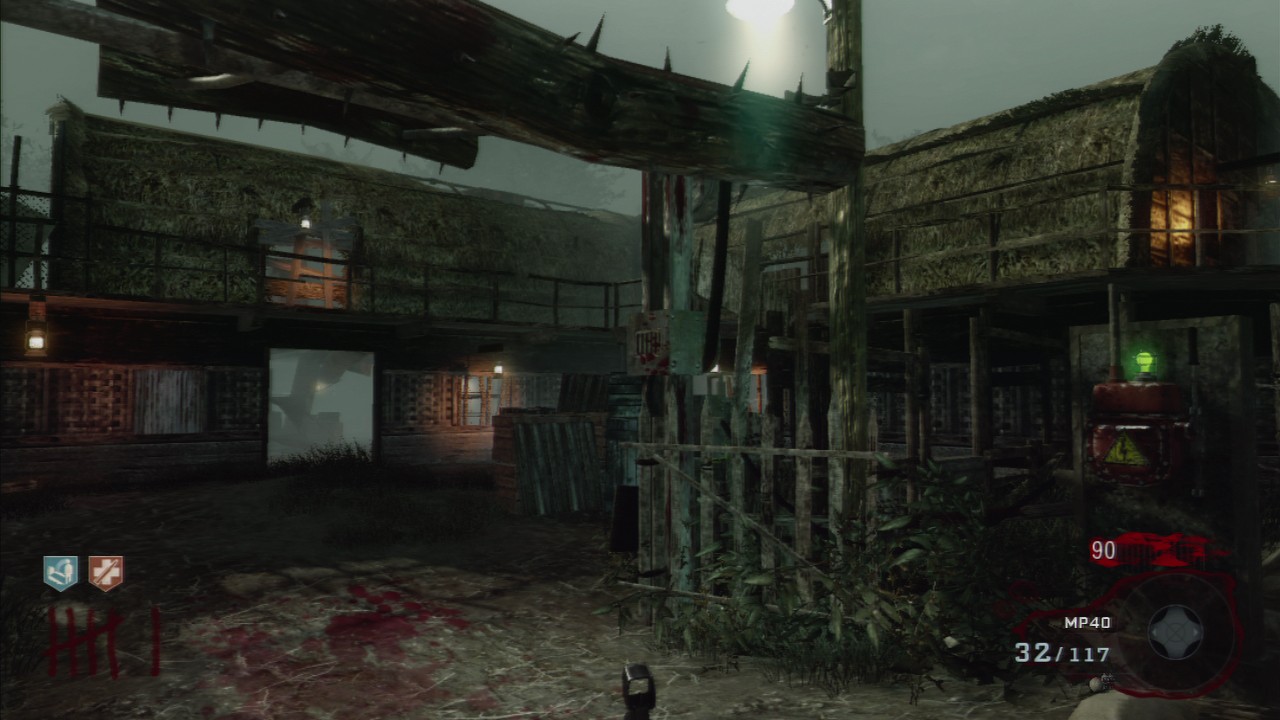 Shi No Numa (Japanese for Swamp of Death) is the third Zombies map from Call of Duty World at War. This version for the Black Ops Rezurrection DLC is mostly the same, though the Mystery Box weapons have been altered.

This map is set in a swamp somewhere in Japan. The original meteor that contains Element 115 can be found on the outskirts of the map, which started all the Zombie outbreaks. Much of the map is covered in wetlands which will slow players down. Stick to any sturdy ground to avoid getting swamped by zombies.

The starting position is a two floor hut. There are four smaller huts surrounding the big hut, creating a + or X shape for the entire map. The main hut has a door and a staircase that you can open up for 1000 Points Each. There are four gates to open up for another 1000 Points, which lead to one of four huts. Each hut costs 750 Points to open, and contains one of four random Perk-A-Cola Machines.

Shi No Numa was the first map to introduce Hell Hounds, flaming Zombie dogs that appear every several rounds. These monsters teleport into the map and attack head on. Kill all the Hell Hounds in the round to earn a Max Ammo and end the round.

Unlike most other Zombies maps, you do not need to restore the power in Shi No Numa to use traps or Perk-A-Cola Machines.

All four surrounding huts have an Electric Barrier trap at their entrance. These can be activated for 30 seconds using 1000 points, and anything that touches the trap will die. Many players stay holed up in one of the four shacks and watch each possible entrance for Zombies.

Another trap called The Flogger can be activated outside the main hut. This is a giant wooden gate that swings like a push lawn mower, killing anything that touches it. Open the gate from the main area to the Fishing Hut to activate this trap for 30 seconds using 750 points.

Four Perk-A-Cola Machines can be found at four huts around the map. The machine will be completely random once the door to the hut is opened. Power does not need to be restored to use these machines.

Bouncing Betty
2 Betties that refill after each round. The betties you set down won’t disappear until someone sets them off.
1000 Points to Buy – One time only.
Ground Floor Outside Main Hut

In World at War you will unlock an achievement by doing this called, “Dead Air.” All you have to do is activate a phone in the Comm room. To activate it, click X (Xbox 360), Square (PS3), or F (PC) three times on the phone. The song is called “The One,” sung by Elena Siegman and composed by Kevin Sherwood.

This Easter Egg has several Radios hidden throughout Shi No Numa. All you have to do is activate them by pressing X (Xbox 360), Square (PS3), or F (PC) on each radio. The first three radios in the starting room must all be activated to work. There’s supposed to be a new message on Black Ops, but I haven’t been able to get it to play. You may need to have four players to get it to work. I’ll update when I find out. The other radios are in the Storage Hut and the Doctor’s Quarters

This Easter Egg can be found in the Storage area of the map “Shi No Numa.” Look to the right of the area for a big molten rock. This is the meteor that contains the Element 115. Shoot it to get a bit of dialogue from each character.