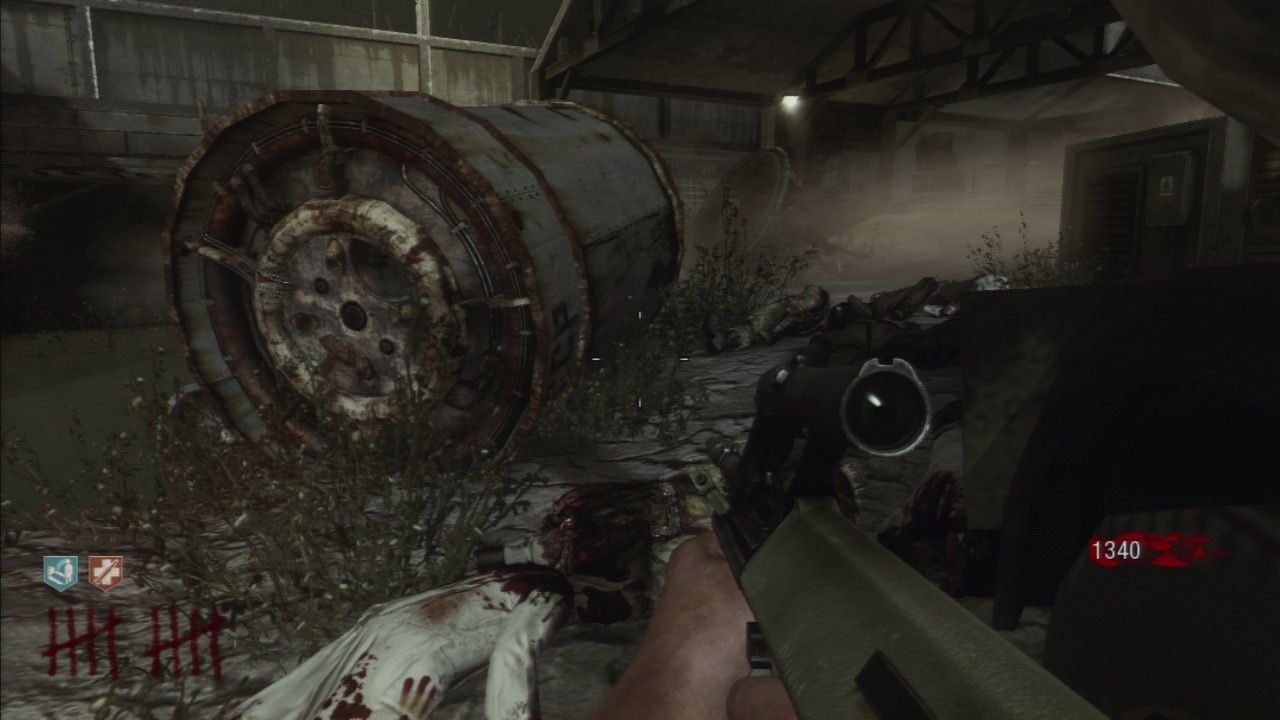 Ascension is the third Zombie Map for Call of Duty: Black Ops. It is set in a Russian spaceport or cosmodrome. The entire map will be in black and white until you turn on the power, which also activates the traps and the Perk-A-Cola machines.

Quick Revive
1500 Points / 500 Points on Solo
Quick Revive allows you to revive your downed teammates in half the time. When playing solo, you can buy revive without having to turn on the power. The perk will revive you if you are downed, and your weapon will turn into the mustang and sally. You can only buy it three times on solo.
Starting Room

PhD Flopper
2000 Points
PhD Flopper is a new perk that allows you to resist fall damage, resist your own explosive damage, and create a small explosion that can kill when you dive off a high point. The height has to be about the height of the character models.
Area near Lunar Lander and broken down truck

Stamin-Up
2000 Points
Stamin-Up is a new perk that allows you to run faster and for longer distances.
Corridor by Lunar Lander

All the older power ups return from the past zombie maps with the exception of Bonfire sale. A new power up is added along with the Space Monkeys.

Claymores
2 Claymores that refill after each round.
1000 Points to Buy – One time only.
Near Stamin Up Lunar Lander

Gersch Device
Also known as the Black Hole Bomb. Creates a black hole which sucks zombies in.
3 Given. Takes up Special Grenade Slot

This is the Musical Easter Egg for the Zombie Map Ascension. You need to find three Teddy Bears around the map to play the song. Press the Activate Button on each bear once you found them. The Activate Button is X (Xbox 360), Square (PS3), or F (PC). The song is called “Abracadavre” by Elena Siegman and Kevin Sherwood. The bears can be found at:

There are several radios spread out throughout the Zombie Map “Ascension.” Each radio will appear after you found the last radio. The radios give a bit of back story to what happened at the space station before the Zombie Character came. Press the activate button on each Radio to play the message. The activate button is X (Xbox 360), Square (PS3), or F (PC). The radios are found at the following locations:

Four Matryoshka Dolls can be found around the Ascension Zombies Map and are connected to an easter egg. The dolls are found near the PhD Flopper, Claymore, Speed Cola, and the floor above the Jugger-Nog.

This Easter Egg requires four players to complete. You can do the first step with one player, but step two must be done with four people. Each step will have short pauses between for dialogue between your character and the trapped character. You will need the Gersch Device, Matryoshka Dolls, Upgraded Ray Gun, Upgraded Thundergun, and possibly an Upgraded Crossbow and Ballistic Knife.

At the start of the game you will hear a voice asking for help. He asks you to repair “the mechanism.” The Kassimir Mechanism is a metal pod looking thing near the Lunar Lander by the Stamin-Up machine.

First, you need the Gersch Device from the Mystery Box. Take it to the area next to the PhD Flopper and Lunar Lander. To the right of the stairs is a blinking generator. Throw your Gersch Device near it to suck it in. If you throw it too far, it will disappear and you will hear a Samantha laughing.

Second, you must wait for a wave with Space Monkeys. Have each player wait next to each Perk-A-Cola machine, with the exception of the Quick Revive machine. When the round starts, a button will pop out of the wall near each machine. All players must hit the buttons at the same time. You will hear a beep if done correctly or a buzz if done incorrectly.

Third, requires the Pack-A-Punch room to be open. Make a crawler and take it FAR off from the room. This step requires about two minutes of standing. All players must stand in front of a clock near the Pack-A-Punch room. It will be right under where the rocket took off. The clock will start counting down when all players are ready. Players can still shoot if the crawler gets too close, but hopefully that doesn’t happen. Once the countdown is complete, a Nuke Power-Up will go off, ending the round/wave. Some say you must have the Ballistic Knife in your group to get the clock to countdown. We had a Ballistic Knife in our group, so I can’t confirm or deny that rumor.

The fifth, and final, step requires the Gersch Device, the upgraded Ray Gun, the upgraded Thundergun, and the Matryoshka Dolls. Some people say you need the upgraded Crossbow too. Head over to the Kassimir Mechanism over by the Claymore Lunar Lander. Throw the Gersch Device near the light that’s shooting on the ground and start shooting the Ray Gun, Thundergun, and throw Matryoshka dolls inside the black hole. If done right, you will hear more dialogue, ending the Easter Egg. There is no known amount of power you need. If you do too much, Gersch will tell you there was a power overload. If you did to little, he will say you need more power.

The Eagle has Landers (35G/Bronze)
In Ascension, escape on all three lunar landers.
There are three lunar landers in Ascension. You must turn on the power to use any of them. Click the terminal next to one of the landing pads to call the lander. Once the lander arrives at one of the three locations, you can buy a ride on it for 250 points. The lander will take you back to the starting position. You can also take the lunar lander from the starting position to one of the already used locations. It takes about 30 seconds to refuel after using it once. Use all three, not one lander three times, to unlock this achievement and the pack-a-punch room. You must launch the rocket first.

They are going THROUGH! (35G/Bronze)
In Ascension, kill at least 5 zombies with 1 Gersch device.
The Gersch Device is a new device in Zombies – AKA Black Hole Bomb. Obtainable only through the mystery box. Each mystery box use is 950 points. You will get three devices if you’re lucky enough to get them. They take up the special grenade slot. Wait for enough zombies to come by, then throw it. All zombies in the vicinity will be sucked into the black hole. Get 5 zombies in it to unlock this achievement.

Space Race (45G/Silver)
In Ascension, Pack-a-Punch a weapon before round 8.
This achievement can be done with a full team of 4. Use only the M1911, M14, and your knife all the way to round 8. Do not buy any perks and be careful with which doors you buy. Use the knife as much as possible. Let the zombies through the barriers to gain points for repairing. Hopefully you’ll earn some double points too. Open the door from the second floor of the starting point, then open the gate which leads back to the main building. Open the doors up to the power. You must turn on the power to use the three lunar landers. You must use all three lunar landers to unlock the pack-a-punch room. Open up the doors that lead to the lunar landers only. Once all three lunar landers are used, launch the rocket by pressing a button next to the power switch. Open the gate next to the power switch to walk down stairs towards the newly opened pack-a-punch room. Stay inside with your team until you earn 5000 points. Upgrade your weapon, preferably the M1911, and grab it to unlock the achievement. If one person has unlocked the achievement, have them support the others until they earn 5000 points to upgrade a weapon.

Chimp on the Barbie (35G/Bronze)
In Ascension, kill a space monkey with a fire trap.
All the traps around Ascension that aren’t auto turrets are fire traps. Wait for Space Monkeys to come by to unlock this achievement. Space monkeys come on after you turn on the power. You may need to buy a perk-a-cola. Buy Stamin-Up to get this achievement early on. They space monkeys will run towards whatever machine you bought your perk from. Stand near the Stamin-Up machine to wait for the monkeys. Next to the machine and AK74u is a fire trap. Activate it for 1000 points to kill any monkey that touches it instantly. The trap lasts for 30 seconds. After 30 seconds, you must wait 90 seconds to use it again.