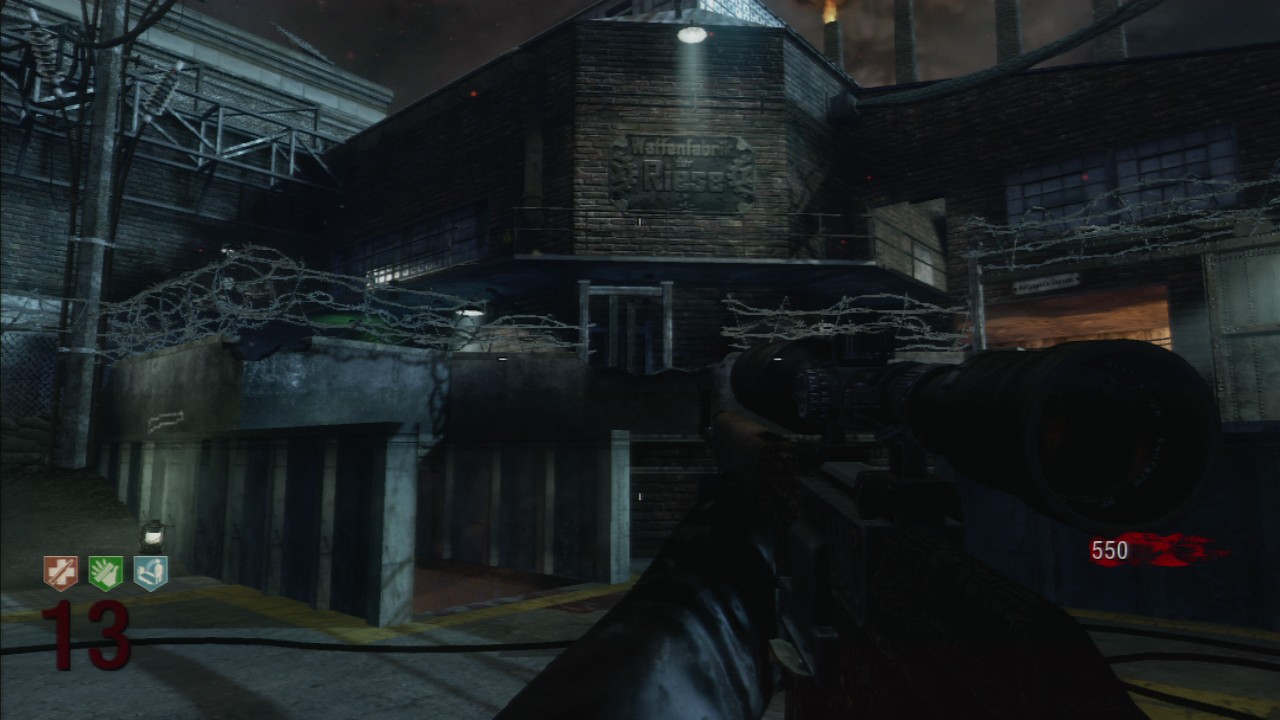 Der Riese was the fourth Zombies Map for Call of Duty World at War. This version for Black Ops is mostly the same, though the Mystery Box weapons have been altered. The Der Riese Zombies map is set in a factory/science lab near Breslau, Germany. This is where the Nazis started testing Element 115 and its effects. The map features lots of narrow corridors. Most people hold up in one room and watch one of a few possible entrances for Zombies. The cat walk near the back teleporter is a favorite location for most players.

In addition to Zombies, Hell Hounds will appear in Der Riese. They teleport onto the map and attack head on. Defeat all the Hell Hounds to earn a Max Ammo Power-Up. Hell Hounds first appear around Round 5 and Round 10, but during the higher rounds, they start spawning at random alongside zombies.

The power switch is located in the back area near a destroyed building, which was the office of Dr. Maxis. Turn on the power to lower a bridge, activate the Perk-A-Cola machines, activate traps around the map, enable teleporters for linking, and open a couple of shutters that block the corridor near Speed Cola.

Der Riese requires you to turn on the power to use the Perk-A-Cola Machines and Traps. The Power Switch is located on the far side of the map from the starting area. There are a few electric traps set around the map that will instantly kill anything that walks through. These traps cost 1000 points and last 30 seconds.

The Pack-A-Punch Machine will upgrade your current weapon for 5000 points. The weapon must be given to the machine for a few seconds, leaving the player vulnerable. If the weapon is not picked up quickly enough, it will go into the machine and be lost forever. Pack-A-Punch’d weapons have increased fire power and sometimes new attachments. Weapons purchased off the wall can be upgraded with the Pack-A-Punch machine, and upgraded ammo can be purchased from the same wall spot for 4500 points.

Der Riese features four Perk-A-Cola Machines similar to Shi No Numa and Verruckt. These four perks can be purchased for a set amount of points after turning on the power, but if the player goes down they will lose all perks.

Bouncing Betty
2 Betties that refill after each round. The betties you set down won’t disappear until someone sets them off.
1000 Points to Buy – One time only.
Stairs above Labs.

There are multiple small Easter Eggs and a Musical Easter Egg on the Zombie Map Der Riese.

The Musical Easter Egg is activated by pressing X (Xbox 360), Square (PS3), or F (PC) on three green jars with a spine and brain floating inside. After all three are activated, the song “Beauty of Annihilation” will play. The song is sung by Elena Siegman and composed by Kevin Sherwood.

All the other Easter Eggs are small bits of info or just interesting stuff here and there. The objects that make your character speak or make a noise seem to bring more zombies that are stronger and more aggressive than usual.

This Easter Egg was originally an Achievement / Trophy on Call of Duty: World at War called “Elevate Your Senses!” In this Easter Egg you play Hide and Seek with Samantha Maxis. You must upgrade a weapon with the Pack-A-Punch machine and activate the “Fly Trap” by shooting a console with the PAP Upgraded weapon. After that, shoot three objects hidden throughout the map to complete the mini-game. The objects do not need to be shot with the upgraded weapon

This Easter Egg was the first big chunk for the Zombies Storyline when introduced in the fourth DLC pack for World at War. There are seven radios hidden throughout the map on Der Riese. An eighth can be found on the iPad version of Call of Duty Zombies, or in the PC Files. All you have to do is activate each radio by pressing X (Xbox 360), Square (PS3), or F (PC). The radios shouldn’t be too hard to find with this video. Three of the seven radios will change depending when you found them. The other four will have the same recording no matter when you found them. I cut them up and put them in Chronological Order based on my research into the Zombie Storyline.