All attachments are unlocked once you purchase the gun. Each gun can only use certain attachments which I listed in the weapons section. 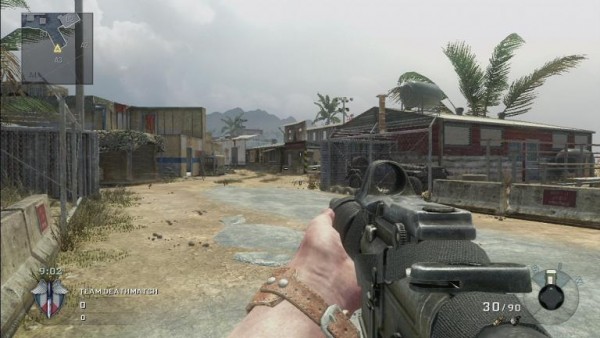 Use this image to compare the zooms of the other weapon sights.

C250
Used on pistols. Adds glowing dots on the irons sights to see the sights in the dark.

C1000
Replaces the default iron sights with a red dot sight. There are two version, a circular one and a square one. The circle version is default for most weapons. The square version is found on the AK74u, AK47, and RPK. 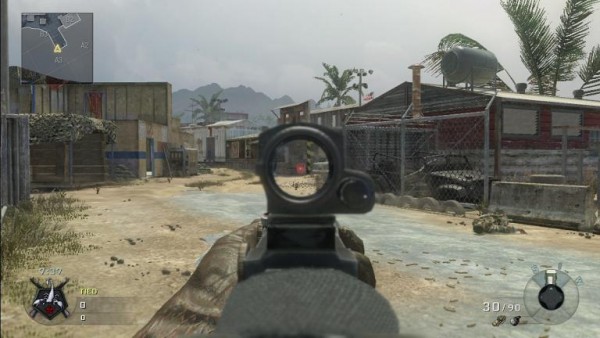 C1000
Replaces the default iron sights with a reflex sight. Similar to the red dot sight, but in a scope form.

C1000
Replaces the default iron sights with an ACOG (Advanced Combat Optical Gunsight) Scope. Gives more zoom than the iron, red dot, and reflex sights. There are three different versions of ACOG scopes. There is a crosshair version which is used on:

There is a circle and dot version which is used on:

And there is another version which is known as a SUSAT Scope. This version is used on:

Dragunov Scope / WA2000 Scope
L96A1 Scope / PSG1 Scope
The default scope on all 4 sniper rifles. Gives more zoom than the ACOG Scope. There is noticeable sway when using the sniper scope. The sniper scope gives the option to hold your breathe to steady the scope. Each of the four scopes are different from each other. The design on the WA2000 is the same for the G11’s Variable Zoom scope. 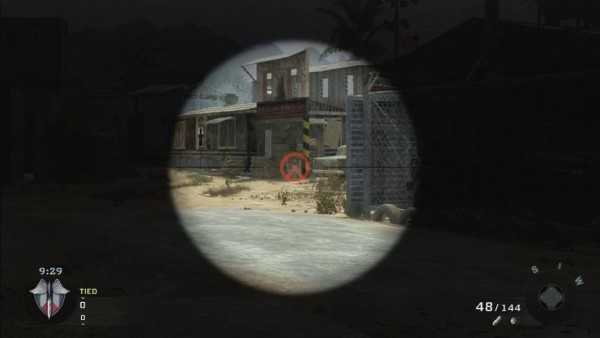 C2000
A special scope on the G11. Gives about a little more zoom than the ACOG Scope. Has idle sway, but you cannot hold your breath to steady.

C2000
The Infrared Scope is a special scope that allows you to see enemies in bad visual conditions. It has the same zoom as the sniper scope. Just like the sniper scope, there is noticeable sway. You have the option to hold your breath to steady the scope. Enemies come up white while friendlies flash white. There are two versions of the Infrared Scope. Most guns have the regular version. The second version is used on the AK47, RPK, and Dragunov.

C2000
The suppressor is an attachment that keeps your gun quiet, takes away muzzle flash, keeps you off the radar as long as there is no spy plane above, and reduces the range of your weapon. If used on sniper rifles it will lower the damage of each bullet.

The grenade launcher is an underbarrel attachment. It shoots 2 40MM Grenades, one at a time. The grenade must travel a 9.5 Meters or it will not explode. If you hit someone directly on with a 40MM grenade and it doesn’t explode, it will still kill the enemy with direct impact. If you fire a grenade launcher within the first 15 seconds of the match, they will not kill but they will take away your 40MM Grenade.
25-150 Damage with a 7.5 Meter Blast Radius

C1000
Holds 4 Rounds +8 Extra.
The Masterkey is an underbarrel shotgun attachment. It shoots shotgun shells with 8 pellets in each shell, just like the other shotguns. The pump action shotgun holds 4 rounds at a time with 12 rounds extra.
10-30 Damage with an 8X Multiplier.
128 RPM.

C1000
Extended Mags function the same as regular magazines. They give more ammo per magazine, depending on the gun, but do not add more ammo total. If your gun has 10 rounds per mag and 20 rounds extra, upgrade to an extended mag with 20 rounds per mag but only 10 rounds extra. The HK21 and RPK call the extended mag the “Drum Mag.” Not only is the name different but the appearance is different. When the M60 uses the Extended Mag, it is called “Big Ammo.”

C2000
Upgrades the CZ75 from Semi-Automatic to Fully-Automatic.

C500
The Snub Nose gives more accuracy but less damage to the Python.

C1000
The speed reloader is an attachment for the Python that holds all 6 rounds together. This reloads all 6 rounds at once instead of 1 round at a time.

C1000
Dual Wield Attachment allows you to hold two of the same weapon at a time. Since you have two guns you will have twice the ammo. You will not be able to aim down the sights of either gun and your crosshair will be a lot bigger than usual.

C750
The grip is an attachment that reduces recoil and makes the crosshair on your gun smaller for more accuracy. Many of the grips on SMGs look like a folding stock, yet they’re still called grips. However, the PM63 calls the grip a folding stock. The AK74u is the only SMG that looks like it has a grip.