After following Wiltse Rd you will emerge onto Sanders St, directly in front of the Flower Shop. 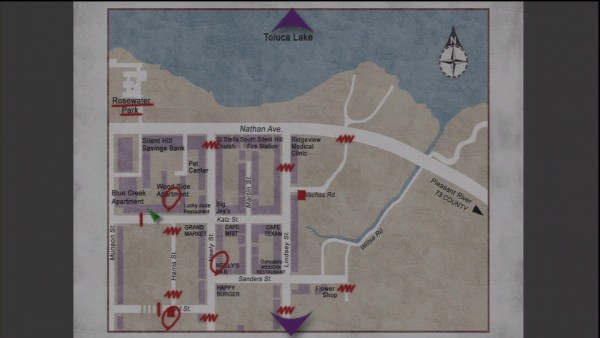 Grab a First-Aid Kit on the table to the left of the shop and head North to activate a short cut scene. Looks like a Monster is nearby.

Follow the blood trails North on Lindsey Street and East on Vachss Road. When you head down Vachss Road, you’ll find a small gated area to the right. Enter through the gate and you’ll find two Health Drinks and a Save Square on a table. One Health Drink is near the leg of the table, and one health drink is in the left bottom corner.

Continue down the road until you come to a blocked off tunnel. Investigate the opening to enter and start a short cut scene. During the scene you’ll find a Radio, a Wooden Plank with nails on one end, and a Straight Jacket Monster. Once the scene ends, use the plank to beat down the monster until it’s dead.

The radio will emit static if a monster is nearby. Now you can roam Silent Hill, pick up items, and fight some monsters; or just continue on the correct path.

The next thing you need to do is get a certain key. This key is located at the end of Martin Street. If you need to get there from the first monster fight, head West on Vachss Road, South on Lindsey Street, West on Katz Street, and North on Martin Street. At the end of the street is a dead, bloody body. Investigate it to find the Apartment Gate Key.

Examine the key to see it belongs to the Wood Side Apartments, just two blocks to the West. Head there now if you like, or search around Silent Hill a bit more for items. You can find Handgun Bullets and a First Aid Kit in front of Lucky Jade Restaurant on the way to the Apartments. There will also be a few Straight Jacket Monsters skulking about. Remember, Silent Hill is a survival horror. You don’t have to fight the monsters! Run away or stand and fight, it’s your choice.

Two areas you can enter before going to the Woodside Apartments are the Motor Home on Saul Street and Neely’s Bar on the corner of Neely and Sanders.

The Motor Home will have nothing but a Save Square and a note that says “Meet me at Neely’s Bar.”

If you met the requirements to unlock the Hyper Spray you can go to the Motor Home at the South Western corner of the map and pick it up. It will be on Saul Street.

Neely’s Bar is pretty empty. There’s a map with a few things crossed off on the counter, and a note written in red on the window. 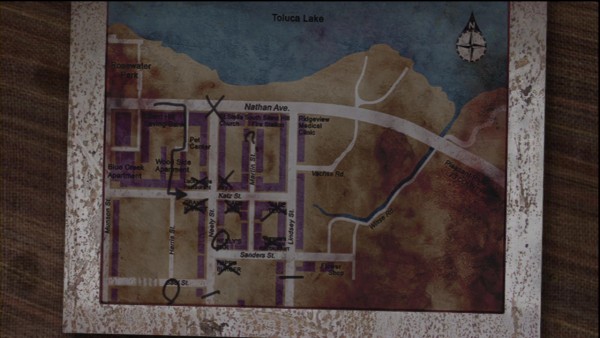 When you’re done, reach and enter the Wood Side Apartments.