After jumping down the hole in Silent Hill Historical Society, James will wake up in a cafeteria. A short cut scene will play.

After the cut scene, grab two Health Drinks on two different tables. Walk to the back of the room to find the Tablet of Gluttonous Pig on a food cart and a Save Square on a cement pillar.

The first thing to do now is find the Map to the Prison. Head through the door Eddie walked through to reach the central hall of the Prison. 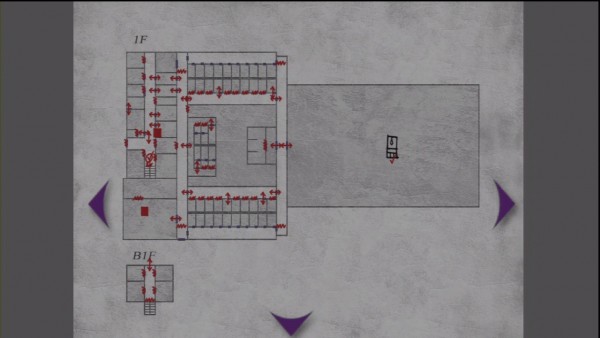 Enter the first door on your left (West). Inside is a First-Aid Kit. You can see a lighter on the other side of the glass, but there’s no way to break it. Exit back out into the central hall.

Enter the next door on the left to find a path that connects to the Western hall.

Take the West hall to reach the other side of the first visitor booth. Inside will be the Lighter you saw a bit earlier.

Keep going down the Western hallway and checking the doors. The next door to the left (East since you’re going down) won’t have anything useful, but you can investigate the toilet stall for fun.

The last door on the left (East) will have a Save Square inside.

Enter the door across the hall from the bathroom. Inside is a Straight Jacket, so be prepared to fight! Take out the Straight Jacket and grab the First-Aid Kit on top of the television and an Ampoule on the sink to the right. This room also has a Health Drink on a chair and a magazine on a table. The magazine has more history of Silent Hill. Go through the door at the back of the room to find a weapon’s closet. Inside is the very powerful Hunting Rifle and a few boxes of ammunition for all three firearms. Exit back out into the hallway.

Before leaving this hallway, you can go all the way South and investigate a trap door. You won’t be able to open it, but remember where it is!

Head to the Central Hallway to investigate the rest of the prison.

The next stop will be the showers in between the Northern and Southern cells. The Northern Cells will be locked from the Central Hall.

There will be two Straight Jackets in this area, so be prepared for a fight. It’s a very tight hallway and there’s no way to pass them up. Take the Northern path to the last shower. Inside is the Tablet of the Seductress.

There’s nothing left in this area, so head back out to the main hall and investigate the Southern Cells.

Most of the cells are locked in this area, but there will be two open cells which you can find on the map. You can also find many Straight Jacket in the cells and walking down the hall.

The first cell (from the left) has a box of Handgun Bullets.

The second cell has many interesting books, but the most important thing is the Wax Doll.

Exit out to the Eastern Hall.

There are three open doors in the Eastern Hall. Take the door on the left (West) in between the Northern and Southern Cells first.

Walk back out to the Eastern Hall and enter the Northern Cells.

Unlike the Southern Cells, you’ll have to check each cell here to find which are unlocked.

The first unlocked cell (from the right) holds a few different paintings, but nothing important.

The second unlocked cell (from the right) will hold the item Tablet of the Oppressor. The cell will lock when you try to open it the first few times. Just keep trying until it opens.

You can unlock the door which leads to the Central Hall, but you need to head to the Gallows first. Take the door from the Eastern Hall to the East.

Head out to the courtyard to find the gallows. Insert all three tablets you have picked up around the prison into the front of the gallows.

Walk back to the door to the Eastern Cell to find the Horseshoe. We now have all the items we need. Head to the Western Hall Trap door.

Combine the Horseshoe, Wax Doll, and the Lighter to create a makeshift handle which opens the trap door.

Exit the elevator and move forward to find a Save Square next to a door that leads to The Labyrinth.