Reward Challenges:
Collect 10 Red Skulls
-Award:Clay Arrow
Reach the Exit in 10:00 or less
-Award:Golden Scepter of Cihuacoatl
Get all the balls to the main room
-Award:Ammo Powerup
Navigate the trap hall on the first attempt
-Award:Gold Lizard
Bomb a Ball onto the skull pedestal
-Award:Health Powerup

You start off here in the main room: 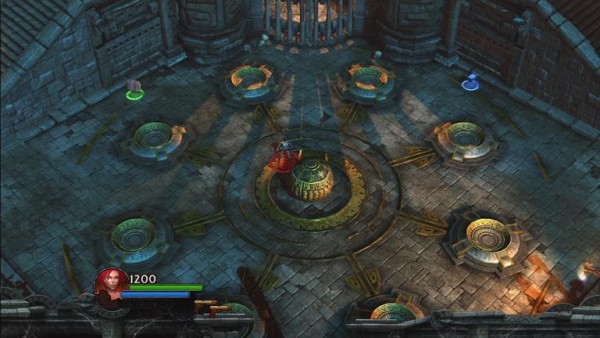 You have to get all the balls in the room in order to unlock the gate. Each ball must rest on each pedestal to unlock one part of the gate. The door on the left is locked so you have to go up the stairs on the right. Walk up the stairs until you reach a room with blue flames on the entrance. A few lizard enemies will come at you in front and behind so be prepared. After you take them out go inside the room and you’ll see the column and target next to the first ball: 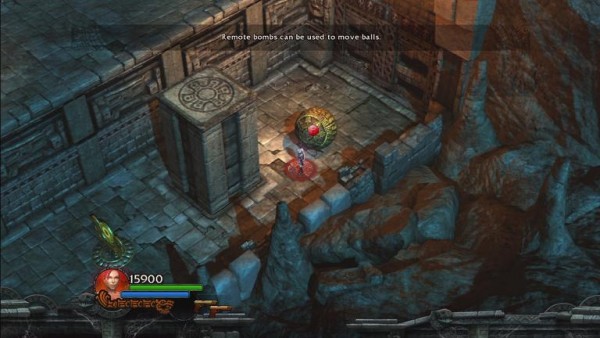 Shoot the target to lower the pedestal and place the ball on top of it with a bomb underneath the right side. Shoot the target again so it lifts the pedestal and ball up. Detonate the bomb and the ball should fly onto the other area so you can roll it to the main room.Move the balls in place and head back up the stairs. Jump the gap in the bridge at the top and you’ll see a ball trapped inside some cage 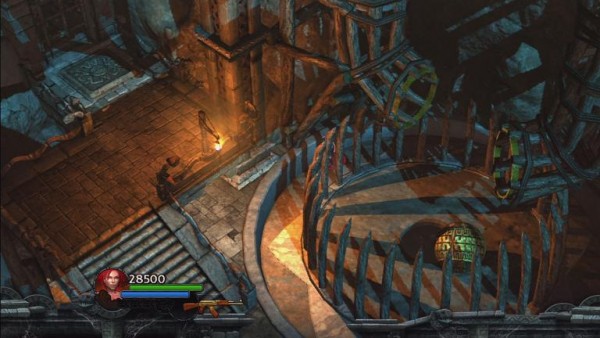 Move the cage by stepping on the sides. Try and get the ball into the middle hole and it will drop down. After that you can take the left or right side paths. First head to the left and step on the pressure plate so the gate will open. Rush in and you’ll face a few lizard enemies and some human like enemies. Take them out and grab all the stuff they drop. You’ll see a challenge tomb to your right, a red skull in front of you, and a way down to the left. Go to the challenge tomb first. This one was pretty challenging. What you have to do is go towards the right side of the tomb, shoot the target, quickly press the grapple hook button, then jump up the pillar when it’s fully raised. This picture shows the gist of it. 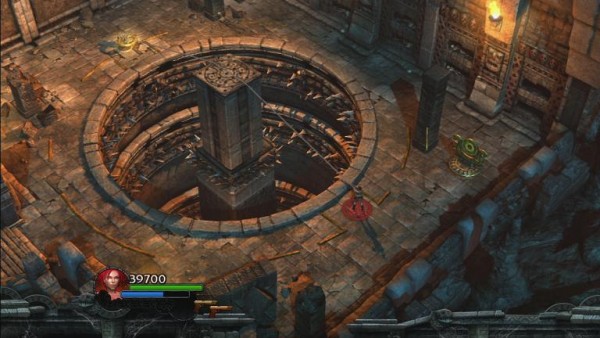 Your award is the stone arrow! Leave the challenge tomb and try for the red skull next. This can be a bit tricky. Jump to the second pressure plate to grab the red skull and jump back. Hit the first pressure plate and the cage will be unlocked so you can get the health power up behind you. Next you’ll want to head to the edge and climb down the ladder. You’ll find a new weapon on the way down, Lightweight Machine Pistols.

At the bottom you’ll find another spike trap: 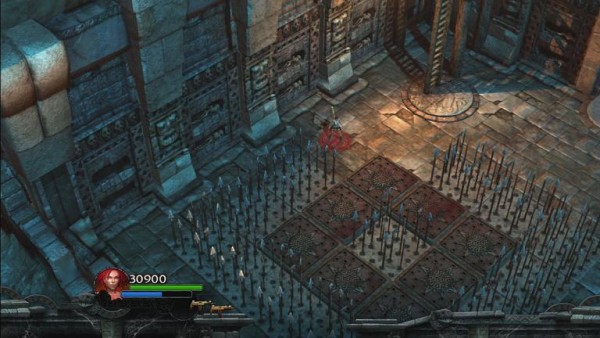 An ammo powerup will be in the middle. Jump over the first pressure spike plate and keep running around the square until you come back. All the spikes will be gone and a door will open so you can take another ball. Be careful when getting the power up because the spike pressure plates can still kill you. Exit the room and head for the main room. You’ll encounter a ton of enemies. Mostly lizard enemies and a few human like enemies. When you defeat them all you can place the last two balls into place.

Now you’ll want to head all the way back up and take the right path instead of the left. Step on the square plate and shoot the target at the other end. You will be raised up a bit. Use your grapple hook to hook onto the gold ring above you and try to wall run to the other side. Make sure you’re up enough so you don’t hit the spikes on the other side. Once you reach that side you’ll be ambushed by a few human like enemies. Nothing special, and they’ll jump from the area you just jumped from. Aim at that area and fire. This next part is a bit tricky. You’ll want to place a bomb next to the column where the ball is on. Step on the pressure plate so the column lowers and detonate the bomb. The ball should fly off hopefully to safety. Move the ball onto the pressure plate and put a bomb on the side of it, between the ball and the spikes. If you put the bomb on the other side it could push the ball in the wrong direction! Stand on top of the column and detonate the bomb so it pushes the ball off and you get pushed up. Jump up to the platform at the top to grab the red skull. Lastly you’ll want to jump down to the platform on the right where the red skull is. Grab it and use your spears to climb back up. Push the ball off the side where you came from and watch out for the spikes. If you drop down you’ll die so make sure you use your grapple hook. Once you reach the other side make sure you shoot the target and bring the ball with you. You can push the ball through the hole to the left of the area where you were just at. 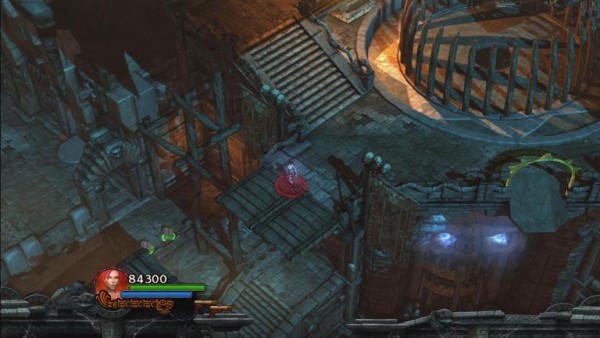 Jump the gap and cross the bridge. You’ll notice some arrow machines shooting your direction in an awkward motion. Try and find the gaps to reach the arrow machines. You can jump over or around them too. Once you reach them you can blow them up and grab a health pack behind them. At the top of the stairs use your spear to cross the next gap. Jump onto the spear and climb up. Enter the first room you see with the blue flames. You can’t get the ball just yet to climb up the ladders on the right side and they’ll take you to another challenge tomb. It’s not puzzle challenging but you will face about 5 human like enemies. Shoot them all and then jump to the other side to get a relic. The scepter of Huitzilopochtli.

Exit the tomb and head left to the next area 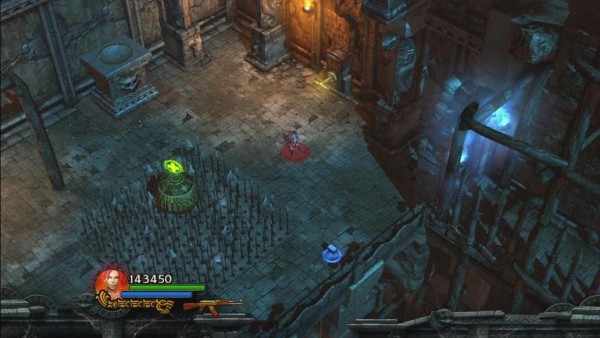 You’ll be ambushed yet again by a few lizard and human like enemies that shoot blue fire balls at you. Now to proceed you’ll have to pull the golden handle for the spikes to go away. Gather up the gems and you’ll probably run out of time so pull the golden handle again, jump on top of the ball, grab the health upgrade, place a bomb underneath the bomb, and get out of the way. You’ll need to try and bomb the ball into the skull pedestal for a challenge. You don’t have to do it but you will get an award. When you’re done roll the ball to the lower left corner into a tube. Now go back to the first room with the ball on a column that we couldn’t reach. You’ll see next to the door is the ball we just rolled into that tube. Grab the ball and put it in the pressure plate so you can reach the ball at the top. A giant enemy should come to face you. Take him out quickly and roll the balls outside of the room and into the tube to the left of the entrance.

Next you’ll want to jump the gap that’s next to the tube to reach this platform I’m on: 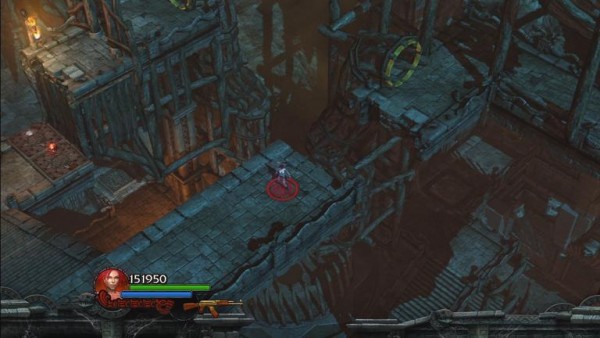 Head forward and take a right (the character’s left) to reach a platform with a red skull. Grab it and jump back quickly because the base will fall with you on it. Now head down the stairs and reach another red skull and a gem. These are on top of spike pressure plates. Grab them quickly and move off. After that you’ll want to use a spear to reach the next step. Continue on to the next room and jump up on some wooden steps. Use your grapple hook to cross some spikes by wall running. Move the ball onto the pressure plate and grab the ammo upgrade and gems. Now push the ball all the way to the spike that goes up an down from the pressure plate. Place a bomb on the side of the ball to make sure it moves forward and step on the pressure plate to make the spikes go down. Detonate the bomb so the ball can move forward and take the grapple hook back across the spikes. Push the ball down the stairs and into the tube at the bottom. Next you need to head back to that cage with the hole in the middle that you move around by stepping on it. There should be three balls inside. Make sure all three fall in the hole and you’ll get the challenge for getting all the balls to the main room! Head all the way back down to the main room and place a ball on each pedestal. The door will open so you can enter.

Head down the path and to your left you’ll see two stone tables. Blow them both up and you’ll find a gem and a red skull. Now you have to navigate the trap hall. First thing will be a ton of spiked presses that will crush you from the left and right side. I put on two artifacts that made my speed go up because I kept getting crushed.

The next area had tons of platforms that fall if you stand on them too long. There’s a red skull on one of them so keep an eye out. Run across and jump across some sections if you have to.

After that are more spiked presses, but this time they’re opening instead of closing. Make sure you keep running but the eight one will open, pause, and close back up so make sure you don’t get crushed! The same will happen for the last two before the very last press. After that you should get a checkpoint.

Next up are more platforms that fall after touching them, but this time steel balls fall from the sky. There are three red skulls here, one on the left, one on the right, and one on the left side again. At the end a giant steel ball will drop so jump to the end and run inside the exit to finish the level.