Belly of the Beast

This level starts off running across some falling wooden planks. They don’t fall till late so you should be safe running directly across. At the other end is a rocket launcher! The area is basically one big square. The sides are spider platforms with ammo packs on them. Step on all the spider platforms to get an award. There are 4 pressure plate squares around the middle pit. Each plate brings up the platform in the middle with an ammo cache in it. It will bring up a bridge to the ammo cache for a short time on one particular side, which will then fall and bring up the bridge on the opposite side like this: 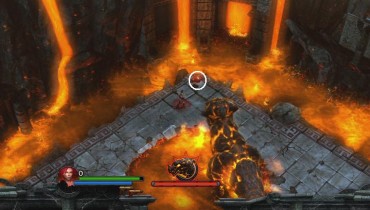 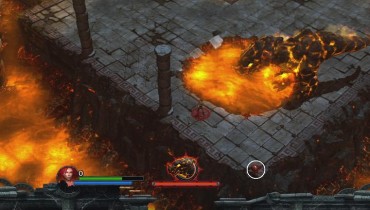 The T-Rex will come out of one of the fire pits and attack you or shoot fire at you. In addition to the T-Rex, there will be fire balls falling from the roof and exploding here and there. When you injure the T-Rex enough with the Rocket Launcher, little baby T-Rexs will come out and attack you. There will also be 4 demons on the 11 spider tiles around the maps. Kill them and they’ll drop the remaining 4 red skulls.