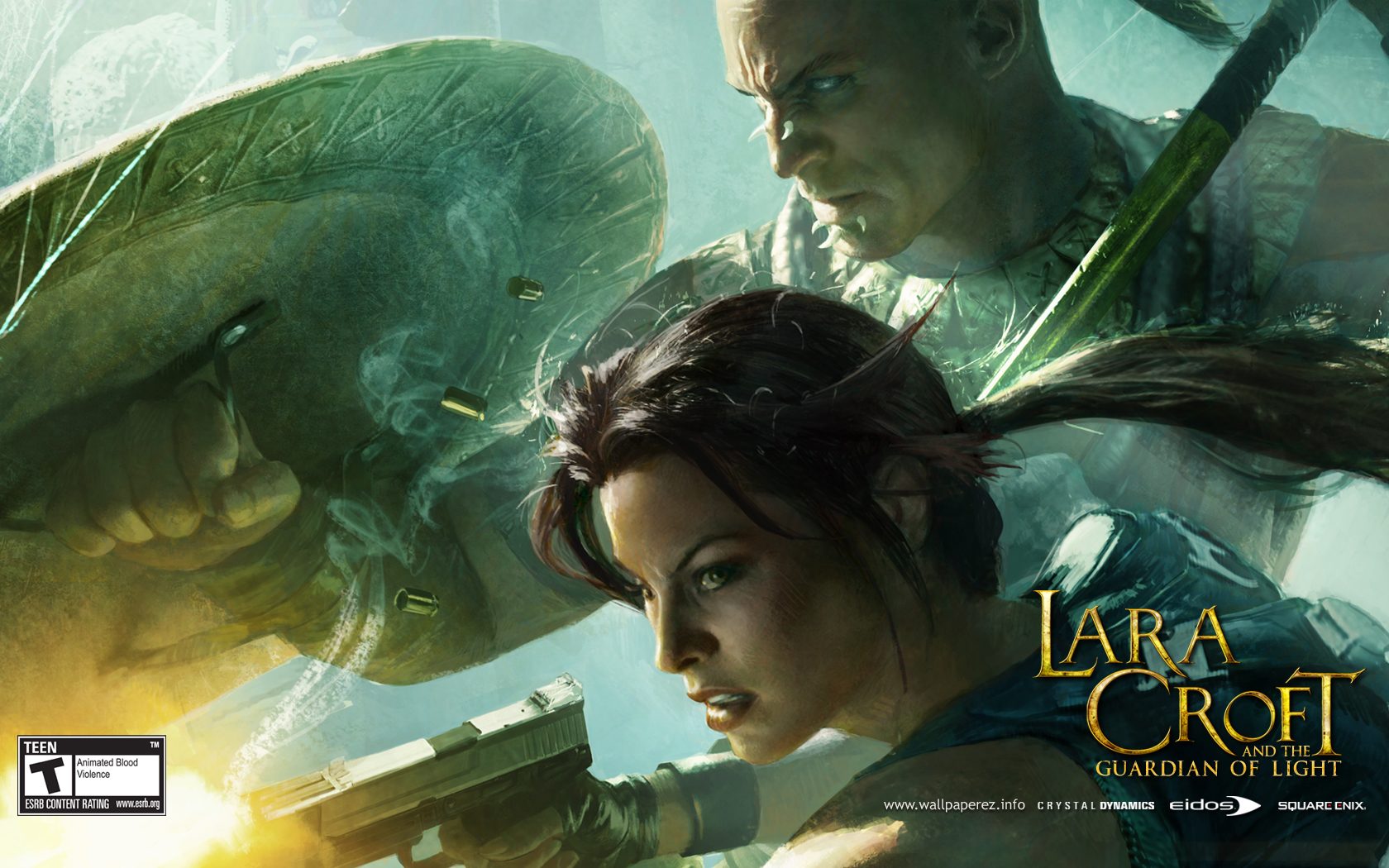 This level starts off easy. You get ammo and health packs at the start. Head down the stairs and you’ll find three gems. Grab the gems and a bunch of spiders will come from the hole in the floor. The small spiders are easy to take down but the bigger spiders are a bit more troublesome. When they die they explode sending off fire balls just like the bigger enemies from before. Once you defeat all of them you can grab the first ammo and health packs and two new ones next to you. To go on you must pull out the golden handle on the right side of the room. When you pull it out, it will pop out a gold ring at the other side of the room. More spiders may come at you so quickly use your grapple hook to get across the hole.At the other side you’ll walk across a bridge and more spiders will come after you. Shoot them and move on. You’ll come to a small fork. The left side gives you three gems. The right side has a huge gap to the other side of the bridge. Use your grapple hook to wall run across the gap to the other side. 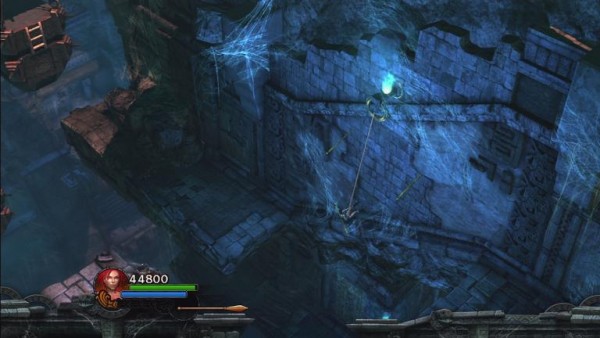 At the other side is a hanging platform with a ladder on the side. Jump onto it and climb up. It will extend a bridge. Jump to the other side on the left and walk until you come across a few spiders. Take them out, grab some gems, and reach a pressure plate in front of a locked door. Step on the plate to unlock it. Inside the room are multiple spiders and three giant spiders. Use your bombs to take out the little ones quickly and your guns to take out the big ones. At the right top corner of the room is a red skull and a steel ball. Roll the steel ball to the exit over a fire pit so you can cross. Once you cross you’ll receive a checkpoint and a gem will be at the other end. Continue down the path and you’ll reach a tomb. Enter the tomb and grab the gems first. Once you grab the flamethrower in the middle tons of spiders will jump down at you. You can use your bombs or the flamethrower. After you take care of all the little spiders, exit out and you’ll get a checkpoint.Head down the stairs and you’ll see a spinning ball: 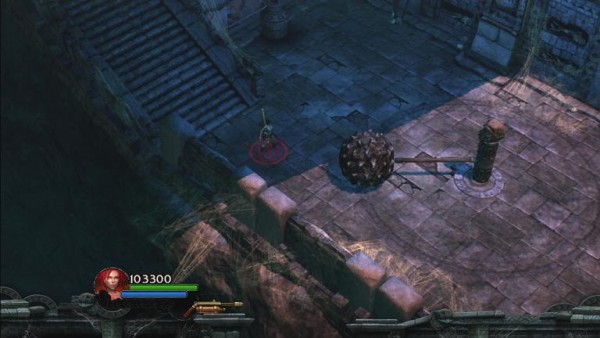 You must use a bomb on it to send it flying and enter the fire pit on the other side. If you do it in one shot you get a challenge completed. If not you can roll it over. In order to get a hole in one you must blow up the bomb before it’s matched up with the hole. The ball would be facing the right bottom corner of the screen. Once it’s disconnected from the poll you must face a bunch of enemies including a giant human like enemy, small spiders, and a giant spider. Notice where the enemies jump down. Use a spear to get up there and find an ammo powerup. After all that head across the ball for a checkpoint. You’ll reach a small fork. The right path doesn’t take you anywhere but the path straight forward will bring you to another counter weight, those hanging square platforms. Jump to one and then jump to another to make it across.

Soon after you’ll come to another fork. The right path (your character’s left probably) is to continue on. Go to the left path first and you’ll find a triple trap or whatever they call it. 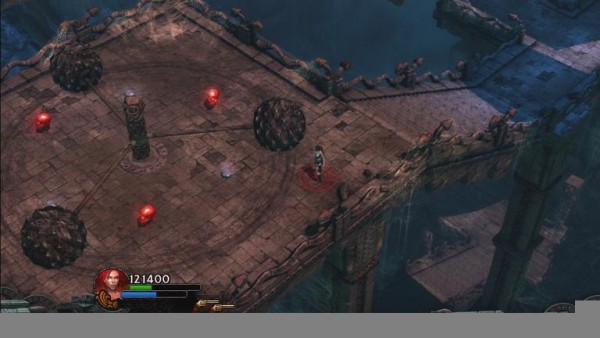 You must jump over it twelve times in order to get another challenge. There are a few gems and three red skulls here. It’s a bit tough but doable. When you’re done blow up the contraption and you’ll find the clay feather inside of it. Next head back and choose the other road from the fork. Step on the pressure plate for the door to open and you’ll see some spikes. If you touch the other pressure plates then more spikes will come up. If you’re quick enough you can get the gems in the middle. To the left of the spike pressure plates is another red skull slightly hidden. Head down the stairs and you’ll find a huge area with tons of spike pressure plates. 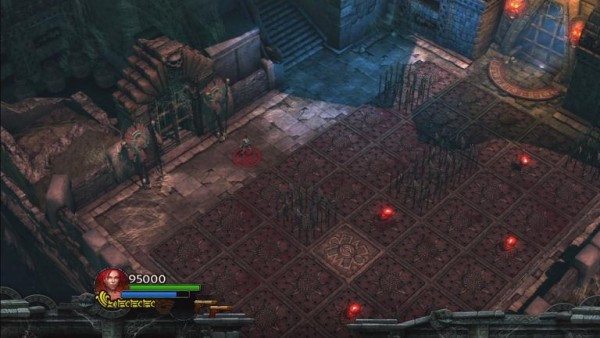 After that head through the door and down the stairs. You’ll have to jump a gap. You should see a health upgrade not too far ahead. Use your grapple hook on a gold ring to climb off the side and get the upgrade. Once you get it spiders will come after you. 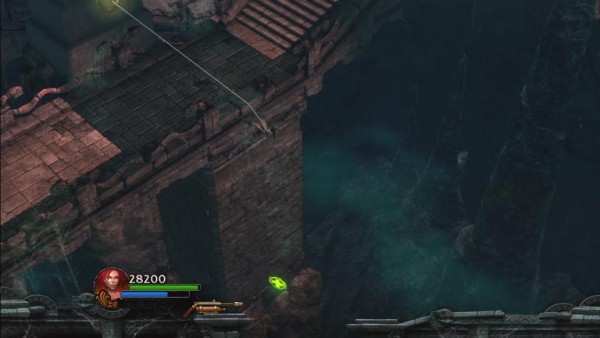 Around the corner is an area with a pressure plate to move forward. Before you do that head down a bridge on the right. It will take you to the last red skull. Use your spears to create something like this 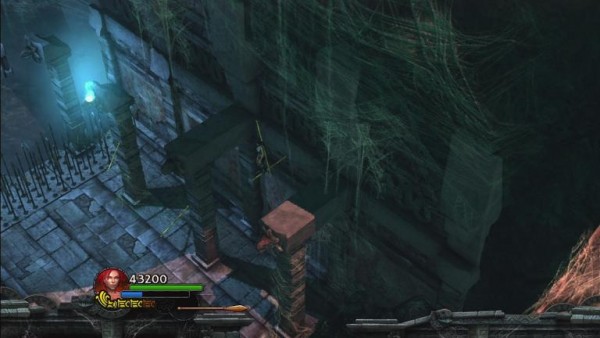 You will have to climb up the stairs and throw them at the wall blindly. Just guess where they will land and you should do fine. Now head back to the area you were at before this. You’ll see a giant spinning statue type thing. Throw a spear on one side and a spear on the other just to be safe. Step on the pressure plate and it will slow to a stop. Jump on the spear you threw and it will spin again so you can jump to the other side. Continue up the bath and jump on the next counter weight that’s hanging. Now the bridge will be fully extended. Head back to the area where the red skull was and you’ll face the queen of the spiders. Defeat her for another challenge completed. She’s really weak against fire so use your flamethrower. Once you defeat her you’ll be awarded with a clay feather. Didn’t we already get that from the triple trap?

Now before you head to the bridge you need to go all the way back to the top. Just go back along the path which you came down. When you come to the fork in the road, take the path that leads to the triple jump to jump across the gap and continue upward. Go ALL THE WAY until you reach the first counter weight. Jump on top of it and it will lower to a relic, the Scepter of Cihuacoatl. Jump to the right to make it to the stair set and run down to the bridge.

Run across the bridge and it will start to retract. At the same time a giant spike roller will come down and crush you if you run towards the end. How do you get to the end? Start shooting above the roller and some TNT will explode causing the roller to come towards you. Head to the end and run off but don’t let go of the edge. You shouldn’t let go unless you press the drop down button. The roller should go past you and you can climb up the bridge and exit out of the spider tomb!