You start the mission inside of a moving truck. You have a PKM light machine gun. It’ll be hard to hit anything since you’re moving so use it as suppressing fire if anything. It has 100 rounds per box magazine so you shouldn’t have to reload too much. When you reach a stop you’ll be able to fire a big mounted machine gun. Take out everyone on the other side of the barrier. You will have team mates that look like the enemy, but don’t worry you can’t kill them. A “technical” will come out which you must destroy. It’s basically a truck with a machine gun on the back, in fact you’re inside of a technical. When that’s destroyed you can get down and walk. You will get a M14 EBR in addition to your PKM. The M14 will have a scope and can fire full or semi auto. It’s best used at semi auto. It only has 20 rounds per mag so if ask for more ammo if you run out.

Move forward and take cover behind the broken tank: 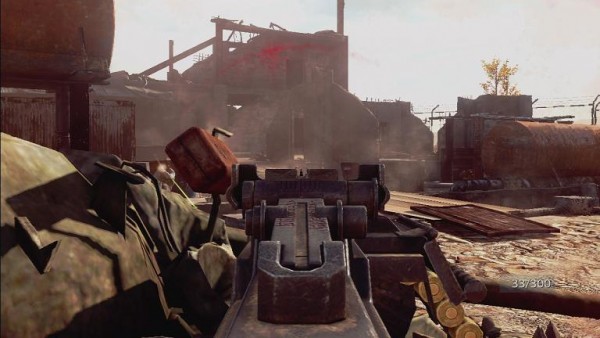 Take out all the enemies that come out. There is not an infinite amount of enemies but there will be a few waves including an RPG man up top. When the coast is clear your men will move up. Follow them into a door. The next area has one guy straight forward behind a wall and about 6 guys to your left on the ground floor and up some stairs. Use all the cover that’s provided to kill everyone.

Walk up the stairs with your team. There will be a little dialogue which tells you to get into the SOFLAM. The SOFLAM looks like binoculars, but it is used to mark locations for air support. You will be told to mark the gates with the SOFLAM. Hold down the fire button on the gates until they’re marked and they will be destroyed. A BTR will then come out and you must do the same.

After the targets are destroyed you must jump down to move on. There will be about two or three men in front of you behind low walls. To the left there will be a few more men, but your team may take them out for you. Walk up the stairs at the back left corner to find two enemy men at the top. You will now have a pretty good vantage point to the other end of the courtyard. 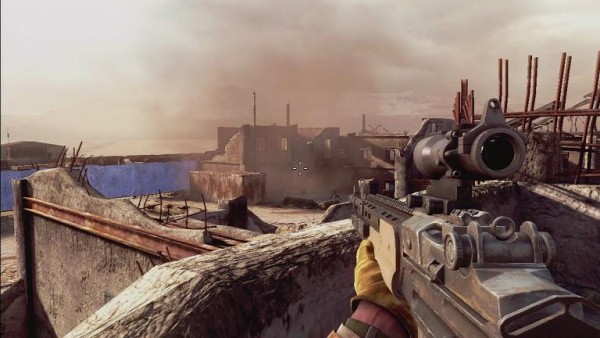 Your objective is to destroy any mortar teams. One team is at the end of the courtyard with a bunch of other men. Take the mortar team out and stay behind cover because more men will come out to fire at you, one will have an RPG. When everyone is dead you can move up with your team. Walk up the stairs in the back to find some frag grenades. Move into the next room which has a broken wall. This is the room that the RPG man was firing from. You should see two more mortar teams to your right, take them out. 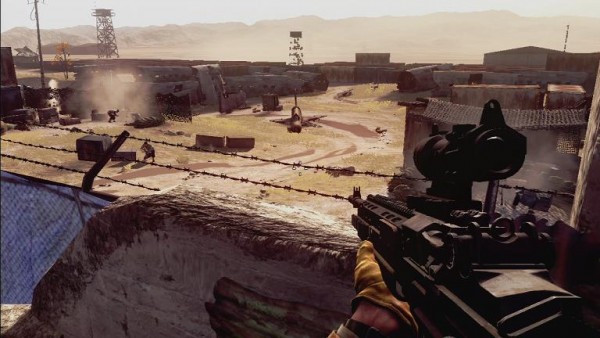 Next you have to jump down and walk to the blue gate to your right. Your team will open the gate for you to progress, but only after the mortar teams are eliminated. Walk forward to hear some more dialogue. You will find another mortar team forward and to the left. They are guarded by 3 men. Eliminate that team to move on.

Your next objective is to clear the airplane grave yard. Move forward and more enemies will come out at the end of the graveyard past the cleared out mortar. You will find a few snipers up in some wrecked planes instead of on the ground. Go to the left and move up to clear the rest of the yard. There will be a mounted machine gun on the top left roof of the warehouse at the end of the yard. The man operating it will be out in the open, take him out nice and easy. Push up eliminating everyone and make your way into the warehouse.

Inside the warehouse you will find more enemies on the ground floor and up in the cat walks. A technical will drive in and shoot up the place. Stay back under cover to clear the warehouse. You don’t need to do anything fancy. The technical should be your number one priority, followed by the men on the catwalk since they have better positioning to kill you. When the warehouse is clear your team will walk up the cat walks and into a room. Follow them to get more frag grenades and hear more dialogue. At the end of the dialogue your team will open the door to the next field.

Inside the hanger you will encounter more men to your right. Take cover behind the plane and then move up to the windows. Clear the hanger of all resistance and move to the giant red door at the back. Your team will open it so you can progress.

You should now be outside. A giant explosion will go off not too far away followed by more dialogue. You have to make it to the tower. You will see a bunch of snipers and RPGs on the tower to your left. Run to the building straight ahead (left of the explosion) to get better cover. 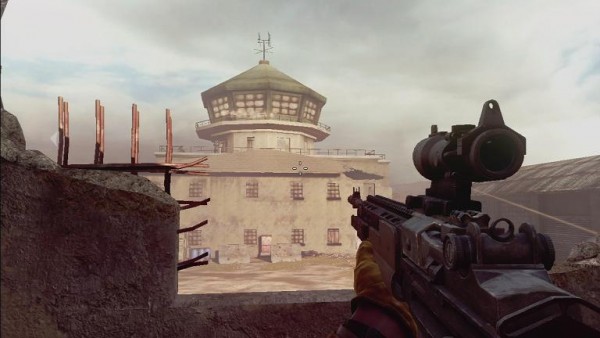 Fire at the enemies, but you do not have to kill them all. Your team will throw a smoke grenade after awhile which allows you to move on. Jump down and run towards the tower.

Kick in the door at the end of the yard to enter the next building. Walk from room to room taking out everyone. There will be a machine gun at the end of the hall and some men shooting through windows. Reach the end of the hall to progress. Your team will open the door to the right of the machine gun and throw a frag inside. Walk up the stairs to encounter more people. Take them all out and wait for your team to reach the far side of the room. When everyone is at a door you must kick it down to move on.

Inside the next room are more people. Clear the rooms and head up the stairs. At the top of the stairs is a window. Stand next to the window to enter the SOFLAM again. Take out the technicals and people on the ground. As you destroy more vehicles you get more air support weapons. 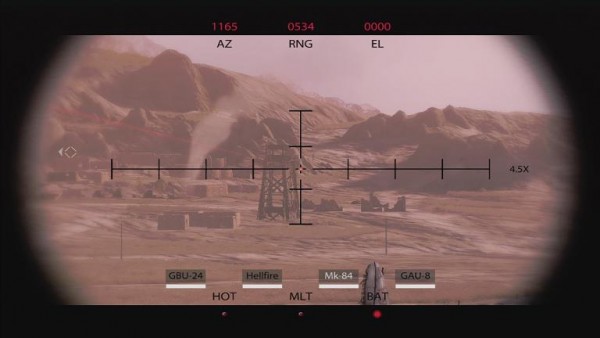 You can choose the direction the strafing run follows, the hellfire missiles will lock on to vehicles, the GBU-24 is a laser guided bomb meaning you can control it as it comes down, the Mk-84 will be the same as the GBU-24 except it’s unguided. If you can destroy two vehicles with one Mk-84 you will get an achievement/trophy. You have to predetermine where they will be to get both of them. When all vehicles are destroyed you will complete the mission.