This mission starts with a cut scene that played at the beginning of the game. When you have control of your guy you will not have a gun, you cannot run, and you cannot jump. You will have a knife and must use stealth to survive. A little later you get your silenced pistol. This mission may be the best mission to get the achievements/trophies for knife and pistol kills. If you can kill 13 people without alerting anyone you will get another achievement/trophy.Walk along the snow path up hill. Go under the fallen tree and look to your left to find a small cave with two enemies at the end 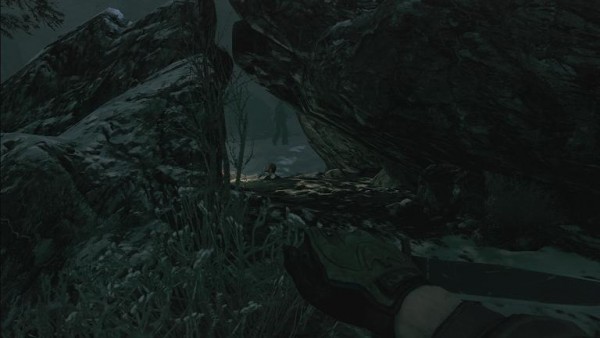 Knife the first one and you will get your silenced pistol. You can knife the second one or headshot him with the pistol. Keep moving to find two more men at the edge of the cliff. Do the same here, knife or pistol kill. Walk along the left side of the cliff to progress. Your team mate will tell you enemies are coming. Run up the hill to the right and stay out of sight, do not shoot them. When they pass you, you can drop down and walk up the path they came from.

Continue up the path and you will hear more dialogue. At the end of the path you will slide down a hill and watch a little real time scene. Your team mate will give you your M4.

The next area is a small Chechen camp. There’s about 9 enemies here. Most are by the fire. Two are up top in the back. One is to the right. The Chechen by the fire will spread out. Keep stealth and silently kill them. Make sure you don’t kill them out in the open or they will find their comrade’s dead bodies and go after you. 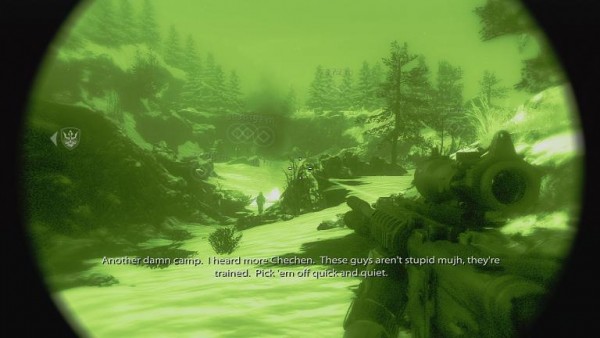 I suggest starting off at the right. Kill the man in the bushes to the right, kill the two men up top, kill the man across the way that your team mate says he’ll kill, kill the man coming up behind you, and then try to take out the remaining 3 or 4. Just go with the flow. Use your M4 with the scope, it’s silenced too. If they find you, more enemies will come out of a cave at the end of the camp. If they don’t find you, you can move on after the camp is eliminated.

Follow Mother to the other side of the camp. He will give you a buddy boost up a cliff. Follow him through the snowy paths and do what he says. You will eventually split up, or at least he will tell you to. Mother will take the top path and tell you to take the bottom left path. You can if you like or you can go with him. You will meet back up in a second so it doesn’t matter. Two enemies will stay behind on three occasions. You take one out and he takes out the other. There seems to be a glitch where Mother never takes out the third guy. He shoots him but he doesn’t kill him. Luckily they’re close enough to each other to kill both quickly.

Mother will take a path upward and tell you to take the path behind you. It may be hard to see but it’s a Cave to the left of the path Mother goes up. Crawl through the cave to get ambushed. A short real time scene will play. Mother will give you covering fire for you to get under cover. I usually head to the rocks on the right for cover. I then shoot all the enemies I can. Mother tells you to head to the high ground which is to the left but mostly out in the open. You will eventually have to go left and up the hill to kill off everyone and get a checkpoint. There is a cave at the top of the cliff with grenades, a Dragunov, and a PKM. I prefer using the Dragunov to pick off people at long range. There will be more enemies coming from the left down the mountain. If they overwhelm you and you can’t find enough cover up against the rocks you can always fall back into the cave 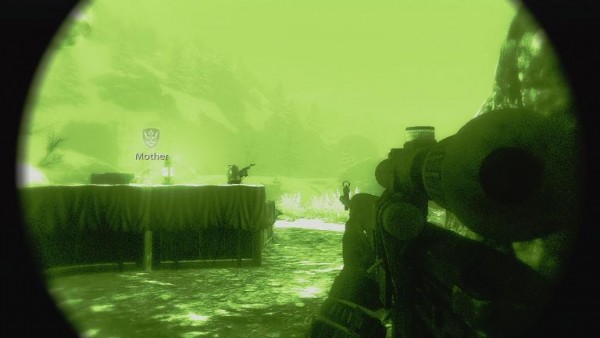 If you are using night vision goggles make sure you take them off when a flare goes in the sky. Mother will usually say “No NODS.” This is usually a decent firing position: 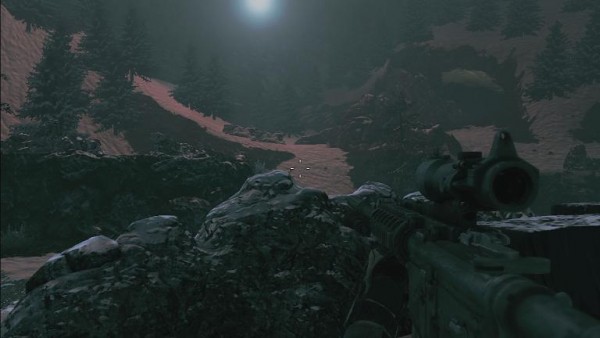 You will finish the objective when all the men are dead. Head to the left if you are looking in the direction the last picture is. It will take you up hill to Mother and initiate some dialogue. Follow Mother into a hut and listen to more dialogue. The next part is pretty straight forward. Kill people while you’re being dragged and the rest is done by itself in a real time scene.