The game starts out with a quote:

“They shall grow not old, as we that are left grow old:
Age shall not weary them, nor the years condemn.
At the going down of the sun and in the morning,
We will remember them.”

Next is a cut scene from a few missions later on. After the cut scene you will be sent back to 6 months earlier. A real time scene will play, just sit and watch. You start the action with a M4CQBR (M4A1 with a red dot scope and PEQ-2) and a 870 MCS shotgun. The M4 has 30 rounds per mag and the 870MCS can carry 6 shotgun shells.

Move forward out of the hut into the street. You will find two enemies hiding behind a barrier. Take them out and move down the street to find two more enemies running to cover. You can pick up their AK-47s if you like but I don’t recommend it. At the end of the street you’ll find a small building to your right. Enter the building and take out the enemy inside to your left. Use the building as cover and shoot the next people above on the balcony. Your team mates will talk over the radio for a bit and move to a metal door. Voodoo will open the door and throw a grenade inside.

The door will open for both of you to move in. Switch to your shotgun for these close quarters. There will be one enemy in the hall but he won’t fire on you, he’s wounded already. Take him out and move on with Voodoo to the next area. You’ll reach a door which leads outside, so switch back to your M4. More enemies are outside, your team mates will be on the balcony in front of you. There will be three enemies to your left, one being on the second floor of a broken building. After they’re taken care of, three men will appear on the balcony in front of you. You may be able to shoot through some of the thin surfaces. When all are dead you have to stack up at a door under the balcony.

Kick in the door with the appropriate button. Inside is a man with an AK-47. Take him out quick with your shotgun or he could do some damage at higher difficulties. Melee the power box behind him and turn on your night vision goggles. The next room has three men, none will notice you until you kill one of them. Kill all three of them quickly with your shotgun and move on to the next room. The next room holds four men. Some of the enemies may be hiding behind cover so don’t let your guard down until you know all four are dead. Now head upstairs. At the top you’ll find another guy who can’t see anything. Stab him or shoot him and move to the door where voodoo will stand at. Kick the door down and get behind cover, there will be two men with lots of cover shooting at you. Try to pull off headshots or throw a grenade.

Make your way through the rooms until you exit the building. You won’t be outside for long. Go to the left on the balcony to enter the next room. An enemy will be inside with a little bit of cover. Take him out and move to the next room which has a few guys inside with cover and more guys on the outside on a rooftop looking in. Once everyone is dead you must go outside and walk across the rooftops with your team mates. Not far from there you’ll find an enemy machine gun pinning your men down. Run and slide straight forward and keep crouched along the barrier in front of you. Walk to the right until you see a shack: 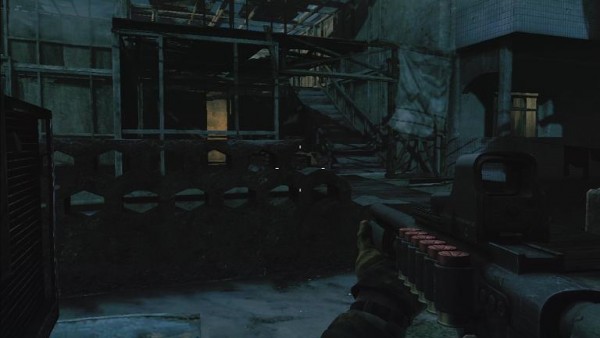 You must flank the machine gun by going in here. Run across the plank and, if you need to, slide into cover so you don’t get hit. Walk up the stairs to find Voodoo up top already. Use cover to take out the two enemies on the roof above the machine gun. Step forward to fall through the roof and start a small scene.

Continue on until you reach a few more enemies. They will be on another level above you. Stick to the sides so you have some cover. Move forward and take them down one by one. You can use grenades if you can’t see them. One or two may try to rush you, so put those guys down fast. Walk up the stairs and your team mates will help you up to the next floor with a buddy boost. Your next objective is to clear the courtyard in the next area. There will be men on all sides so stick back under cover! Most of the men will be on the balconies shooting from above on the right, left, and straight forward. When your team mates move up it should be safe for you to move up with them. Fight towards the building at the back. When everyone is dead the door will open up with two men shooting from the inside. Shoot back and walk inside.

Your objective is to rescue Tariq. Walk through the building until you reach the door you must kick in. Stand next to it for another scene to take place. Exit out of the building and move through the streets yet again. You should reach an area that gets hit by a RPG. Your team will ask you to go left or right. I suggest going left because the right path is out in the open and you will be hit from all sides. On the left you take a back alley. Shoot the enemies who are hiding around corners and in little garages or shacks. After that you’ll reach the fort’s gate. Your team mates will call in for a support to blow open the gate. If you’re too close it will kill you so take cover.

Inside the courtyard of the fort is another Machine Gun. Take cover behind rocks and anything else you can so it doesn’t tear you apart. Voodoo will tell you to flank left as you move up. Look for this wooden door to the left: 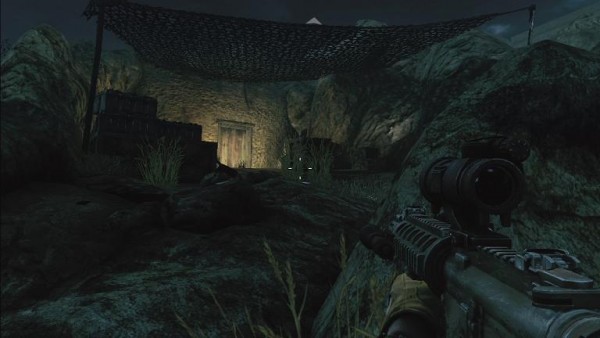 It may be closed at first but it will open with two enemies coming out after your team frags a truck. Kill the enemies and make your way through the tunnels to flank the MG. When you reach the top you should find an enemy that your team mate tells you to take out. Kill him to find the Dragunov SVD, a sniper rifle. Switch your shotgun for the SVD and take out the machine gunner straight ahead with the M4. Your next objective is to clear a path for your team mates on the ground.

Use the Dragunov to snipe anybody in the way. All the enemies will be in front of your team mates on the ground or in the windows of the houses across the courtyard. There should be more Dragunov ammo to the left of where you first found the Dragunov. When all the enemies are dead in the courtyard you must meet back up with your team and walk into the warehouse. There will be a box to the left inside the warehouse with grenades inside.

Exit the warehouse and walk through another yard. You will find 5 more enemies running to cover or already behind cover. Kill them with your grenades or your gun. Break down the door at the end of the yard to go through two more rooms. Inside these rooms are about 6 more enemies with lots of cover. If you can’t fire a clear shot you will want to use your grenades here. Exit the building and cross the next courtyard to find the last building. Kick in the door for everything to go into slow motion. You will see a hostage and a few enemies. The game will automatically switch to your pistol. Take out the man who grabs the hostage before he can kill him. If you take him out with a headshot you will receive an achievement/trophy. Don’t worry about the others, your team will take them out. Head to the back of the truck behind them all to end the mission with a cut scene.