You start the mission with a short cut scene. When you have control you will be on the mini gun. 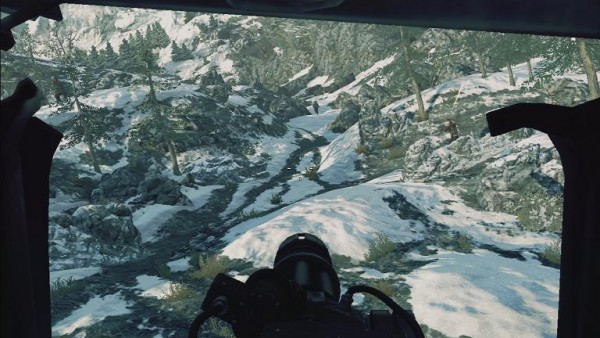 Take out all enemies, make sure the RPGs are your priorities. If you chop down 5 trees with this gun you will unlock an achievement/trophy. The mini gun has infinite ammo but it can over heat. After you take out enough RPGs you will be able to move with your team. You start out with a M4 (Scope and Grenade Launcher) and a M1014 (red dot).

Follow your team up the mountain fighting any resistance. Use the rocks as cover. You will find two Machine Guns that you must mark with your SOFLAM. Click the fire button while using the SOFLAM to mark the locations and move up.

After the second machine gun is destroyed your team will move up to it. They will find a cave in the back. Enter the cave and switch to your M1014 for close range kills. The cave is pretty straight forward. If you get lost, which is pretty much impossible, follow your team mate. Use anything you can for cover.

At the end of the cave you’ll meet up with more friendlies. On the outside you’ll find a Dragunov SVD on the floor, you can trade it for your shotgun if you like. Follow your team up the mountains to come across an enemy camp. There are tons of enemies hiding in the rocks all over. Stick back and use cover to take out who you can see. When you don’t see anymore people you can move up and take out the next set.

After the camp is clear you must take out a stronghold. 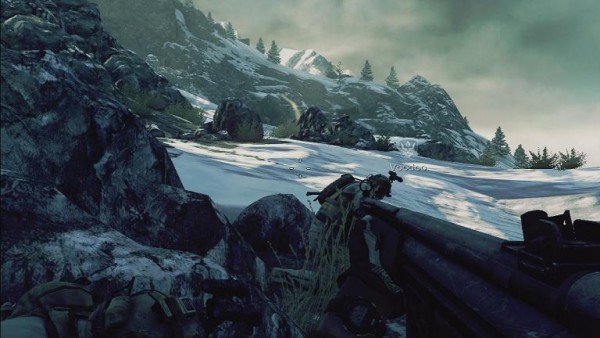 There will be a mounted machine gun and RPGs firing from across the mountain at you and your team. Try to take the path to the left. Stay behind all the rocks you can for cover, those RPGs will do massive damage. There is a Dragunov SVD on the left side next to the rocks on the right of the path. Try to pick it up and take out some of the people at distance. Your team will follow you and help you take out more enemies. Get closer for a checkpoint and you’ll hear dialogue about air support. Eventually you’ll get a predator to help you. Stay down behind cover since it’s danger close, it will blow up the entire stronghold. Your team will find another cave in the back. Enter it and bust down the door for a cut scene that ends the game.

If you can’t read the text fast enough it says:

“To our brothers, past and present –

This is a dedication to America’s servicemen. A dedication to the debt we owe to Warriors lost and to all our military forces who continue to defend freedom around the world. Men and women who have honorably served throughout our nation’s history – who stood and continue to stand fast in the face of a determined enemy and defeat them with unwavering discipline.

Most Americans do not know what our Special Operations Forces community experience. They do not know what these Warriors endure in combat, nor do they understand the selflessness and love of the brothers beside them. Men within this community bring the fight to the enemy, engage aggressively and stand their ground.

Born unto a different cloth, these men could have chosen a different life of prosperity and chased every opportunity afforded by our great nation. Giving life as they live it, they chose to leave these pursuits behind and devote themselves instead to a higher calling, living with indomitable purpose, by simple truths – Brotherhood. Honor. Sacrifice. Words molded into their character, exemplified by their actions.

It is their final hour we celebrate – our fallen brothers who shine a light on the greatest attributes of dedicated men. With their sacrifice, legends are born and will live as examples to inspire the heroes that will lead our nation to victory in the years ahead; making our founding fathers proud and acting as a promise to Americans next generation.

This to our fallen brothers. You will be honored in our community’s history as the greatest heroes. As men who shouldered our nations burden, you will remain as beacons for our heroic ideals. Taught to be proud and unbending in failure and humble in success, there are no greater examples for which this nation stands for and of which this nation is built from – the ideal of service to country and to others.

To our community and all who wear the uniform – Thank you for your service to the nation.

And, to those in this hour who are in the fight and keep our enemies awake at night.”

The ending song is “The Catalyst,” by Linkin Park.