In pokemon there are many things to consider when choosing moves/attacks. I hope to explain everything about them in this section and make them easy to understand for beginners or for players new to the fourth generation of pokemon. To see all the attacks and what they do etc you can click this link

The newest and greatest addition to pokemon in the 4th generation (Diamond, Pearl, Platinum, Heart Gold, Soul Silver) is the separation of attacks into three categories! Before attacks were separated based on type. All dragon moves were special attacks and all normal and fighting moves were regular attacks. Now attacks are split up into three categories which are Physical, Special, and Other. You can recognize which type of attacks these are by the icon next to the attack name in your stats menu. Some pokemon are better with physical attacks rather than special attacks. Check their stats to know for sure. Physical attacks use the attack stat to damage and the defense stat to resist the damage. Special Attacks use the special attack stat to damage and the special defense stat to resist the damage. The other section is use for stat boosting or status effecting moves such as increasing your attack stat or poisoning an enemy.

The more indepth stuff about attacks are the types, OHKO, and Critical Hit moves. If you see moves that say OHKO it’s short for One Hit Knock Out. These moves are semi rare and very inaccurate. Their accuracy rating is usually 30/100, but if they do hit they will instantly kill you.

Types of attacks also effect the power quite a bit. There are 17 different types of pokemon. They are Bug, Dark, Dragon, Electric, Fighting, Fire, Flying, Ghost, Grass, Ground, Ice, Normal, Poison, Psychic, Rock, Steel, and Water. Some pokemon are of one type and are known as “pure” while others are of two types and are sometimes called “mixed.” Some types are strong against others and do 2x the damage compared to neutral types. An example is an electric type move on a normal pokemon does regular neutral damage, but an electric type move on a water pokemon does 2x damage (that’s twice/100%). It will say “Super Effective” when you have a type battle like this. Some types do .5x damage (that’s half/50%) to other types. An example is a fighting type move attacking a bug type pokemon. It will say “Not Very Effective” when you have a type battle like this. When it comes to mixed pokemon you may do 4x damage, .25x damage, or just break even. Examples are electric attacks on a water/flying type pokemon mix for 4x damage, Fighting type attack on a flying/poison type pokemon mix for .5x, and poison type attack on a grass/poison type pokemon mix for a neutral attack. Then there are some types that won’t even hit the other type. An example is normal and fighting type attacks will not touch ghost types, and poison type attacks will not touch steel types. For a type chart look at the following image: 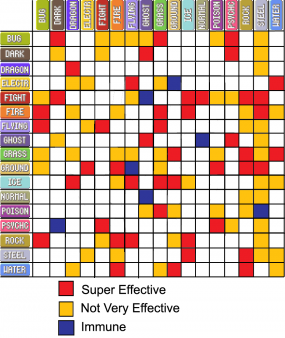 When a pokemon of a certain type does the same type of move as his type, it will give an extra boost. That sounds confusing so let’s say an electric pokemon uses an electric move, that move will now be boosted because it has a “Same Type Attack Boost” or “STAB” for short. The STAB gives an extra 50% damage to the attack. Pretty simple! Along with the rest of the boosts or decreases, attacks can vary in power quite a bit.

Weather can play a big part on the battlefield. Sometimes there will be certain weather on the map and when you go into battle the same weather will be reflected and last the whole battle. Other times pokemon moves or abilities will effect the weather on the battlefield; the moves last 5 turns and the abilities last the whole battle unless changed. All other times there’s no specific weather so it’s just neutral. A few hold items can extend the length of the weather in battle. These are Damp Rock, Heat Rock, Icy Rock, and Smooth Rock to keep rain, sunshine, hail, and sandstorms lasting 3 turns longer making them 8 turns total. The other weather patterns have certain effects on the pokemon, abilities, and move types:

Sunlight is a pretty common weather in pokemon. To get sunlight use the Sunny Day move or the Drought Ability. Sunlight increases fire type moves by 50% power. It also reduces water type moves by 50% power. Thunder’s Accuracy is reduced to 50% and Solar Beam doesn’t need any charging to use. The moves Moonlight, Morning Sun, and Synthesis restores 66.6% of max HP in sunlight.

Rain is a pretty common weather in pokemon that is activated by the move Rain Dance and the ability Drizzle. Rain increases water type moves by 50% power and decreases fire type moves by 50% power. Thunder will always hit while it’s raining and may even hit through protect and detect 30% of the time. Moonlight, Morning Sun, and Synthesis restores 25% of max HP in rain.

Hailstorms aren’t as common as the other two common weathers in pokemon. To activate it you use the move Hail or the ability Snow Warning. When there is a hailstorm all non ice pokemon or pokemon without snow cloak and ice body abilities will be damaged each turn by 6.25% of their total health. The move blizzard will hit every time and may even hit through protect and detect 30% of the time. Moonlight, Morning Sun, and Synthesis restores 25% of max HP in hail.

Sandstorms aren’t as common as the other two common weather in pokemon. To activate it you use the move sandstorm of the ability sandstream. It damages all pokemon that aren’t rock, steel, or ground type or pokemon with the sand veil ability by 6.25% of max HP. Sandstorm also raises the special defense of rock type pokemon by 50%. Thunder’s accuracy is reduced to 50%. Moonlight, Morning Sun, and Synthesis restores 25% of max HP in a Sandstorm.

Along with the moves pokemon learn while leveling up there are also TMs and HMs you can find around the world on your adventure. Technical Machines or TMs can only be used once and forgotten like all other moves. Hidden Machines or HMs can be used as many times as you want but can’t be forgotten unless you find a move deleter. HMs are also used outside of battle to help you progress through your adventure. Here is a list of all TMs and HMs, what they are, and where you can find them in Heart Gold and Soul Silver:

In Pokemon Heart Gold and Soul Silver there are a variety of move Teachers. There are Move Tutors that teach you moves for free around Johto or for a price at the battle frontier. You can learn Headbutt from a move tutor in Ilex Forest for free as many times as you like. There’s also a move tutor in Blackthorn City who will teach you a powerful elemental move if your starter pokemon is very happy. They are Frenzy Plant, Hydro Cannon, and Blast Burn.

Move Deleters are used for deleting HMs off your move list because you can’t remove then any other way. You can find the move deleter in Blackthorn City.

Egg moves are special moves that can only be taught by breeding. To learn more about breeding check the next section. Egg moves are taught to the baby pokemon that hatches from an egg through the male pokemon. The move can be a TM/HM that the baby can learn or a regular leveled up move the baby can learn later on that the male and female knows. There are also certain moves that can only be taught through breeding and becoming egg moves to teach to their babys. An example is if a male dragonite knows outrage and mates with a female charizard. The baby charmander will then learn outrage.