The Male Ward area starts immediately at the end of the Sewers. Before heading up the staircase on the right, walk forward and record the pile of bodies in the room on the left. This will give you a Note entitled “A Feast for Flies.” Walk up the stairs to get your first objective.

Reach the ground floor of the male ward.

At the end of the hall is a heavy crate of some kind. Push it to the left to expose a small crawl space. Crouch through this crawl space and continue on.

Exit out of the room and take a left down the dark hallway. Record the left wall of the next room to get a Note entitled “Organized Torture.”

Walk down the hall until you reach a room with another heavy crate. Push this crate away from the door and go through to the next hall. Take a left and crouch into another crawl space.

The room up ahead contains another Document. It is located on a small table at the far end. This Document is entitled “Project Walrider Cost Report.” With the document in hand, climb up the open ventilation duct.

Continue running down the hall and make a left into the room with blood streaks leading in. Jump up into the small hole on the right side of the room and jump out the other side.

Keep running to the left and jump through the small window over the desk in the checkered tile room. Make a quick left and jump across the gap in the floor to escape.

Turn around and you’ll hear more inmates coming from the door up ahead. Run down the hall on the right, make a right once you reach the room at the end of the hall and climb through the window above the blocked door. Continue down the halls until you reach a room with a dumbwaiter. Interact with it when you can to escape once more.

After a lengthy scene, you must escape from a wheel chair. Use whatever comes up on the screen to be released. Leave the room and take a right towards the man on the bed. The man will start freaking out and warn the Doctor, so quickly get under a nearby bed and record the two. This will give you a Note entitled “Dr. Rick Trager.”

Once the doctor goes away, sneak out the door as quickly as possible. If he comes back before you can get out, try hiding in the shadows or under beds.

Take a left down the hall followed by a right when you reach the T section. The elevator requires a key to use, which means we have to go find it! Climb up the vent above the bed and jump out the other end. Before searching for the elevator key, move the large crate blocking the door on the left. If the doctor sees you, you may need to run out this door and back up the vent to safety — that is, if you can’t hide under a bed in one of the rooms nearby. Two rooms are connected to each other on the left side of the hall.

The objective here is to get past the doctor in this hall and open the door at the end. The door is blocked by a heavy crate, which means you’ll need enough time to push it out of the way and escape without being killed. Use the side rooms to get passed the doctor, and make sure he is far away enough before you start pushing. Remember to use the lean function instead of walking out and getting caught.

Once you make it through the door, quickly close it behind you to slow down the doctor. Make a right and jump up the open air duct.

At the other end of the vent is a bathroom. Open the stall on the right to find a Document entitled “Request for Reassignment.”

Exit out of the room to the hall. Across the hall on the left is a small room with the key to the elevator. Once you pick it up, the doctor will try busting through the door to the left of the key’s holder. Jump back through the window and hide somewhere in the room you just came from. It may be best to hide in the shadows to the left of the door. When the doctor passes by, run back out into the hall, jump into the room where you grabbed the key, and run out the door the doctor broke down. Follow the hall to the left and back to the elevator. 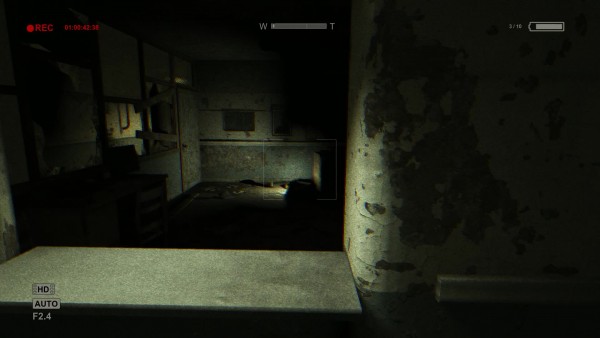 While going down the elevator the doctor will try to attack again. When you regain control, record him to get a Note entitled “Death of Trager.”

Turn around and open the trap door at the top of the elevator to get out. Go down the hall on the right and descend the stairs. At the bottom is a battery in the dark corner. Squeeze through the small passage in the wall to continue on. Follow the path to find Father Martin. After a short conversation, you will get a new objective.

Follow the dark hallway on the left until you reach a locker room. On the right side of the room is a Document on the floor. This Document is entitled “Persecutorial Delusions.” Pick it up and go around the left side of the locker room.

Down the hall is the cafeteria. You can reach it by climbing into the window. Just follow the blood streaks. 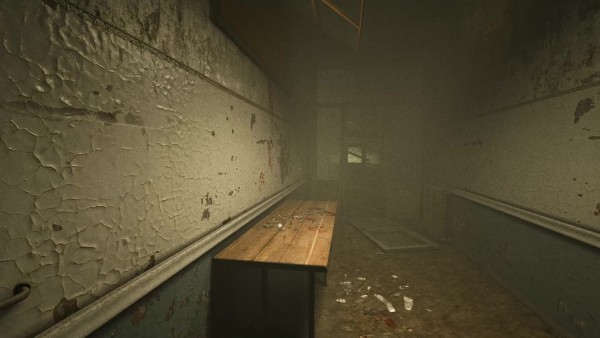 The entire cafeteria is on fire. Navigate around the burning tables until you find an inmate sitting on one of the tables. Record this man to get a Note entitled “Let It Burn.” You will get a new objective.

Turn on the sprinkler system to extinguish the fire.

Follow the path over and under tables out of the cafeteria. Down the hall to the left is another small passage, but don’t go through just yet. Take a right before the passage and navigate through the dark hall to a room. A Document can be found in this room on a desk. The Document is entitled “Psychopathological Proximity Stress Disorder Pamphlet.”

Return to the small pathway and squeeze through to get to the next area. The sprinkler system is nearby, but you will need to turn on two valves before you can use it. Enter the next room and make a quick right towards the laundry room. The big Variant will be back, so try to remain hidden. The valve is located in the small room within the laundry room. If the Variant comes for you, hide in the locker to the left of the valve.

Exit out of the laundry room and head to the opposite end of this area towards the baths. You will need to squeeze through another small passage here. The valve is in a small room just pass a row of baths.

With both valves turned, return to and activate the sprinkler system. The Variant will still be around, so don’t let down your guard. The last objective will become available again.

Return to the cafeteria and exit out the door at the other end to reach the kitchen. Make a left in the kitchen and investigate the small room through the door. Record the severed fingers in a bowl to get a Note entitled “Fingers.”

With that out of the way, head out the open door at the other end of the kitchen towards the exit. This will end another chapter of the game.