For day two I woke up earlier than I wanted to. I had to check out of Spring Hill Suites and head to the Hilton around noon. I expected the Hilton to hold my luggage for a few hours while I went around the convention, but surprisingly they had a room available for me so I could check in right away. I would have immediately went back to bed if it were any other day, but another YouTuber wanted to meet up before leaving town. 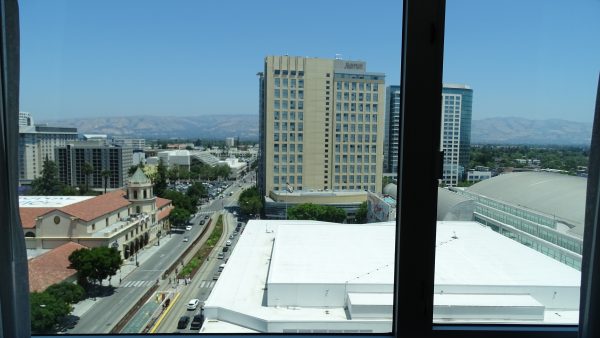 Magnetrix was the name of this other YouTuber. He’s an internet critic from the same town as me. We did a quick interview and chatted for quite awhile about conventions and YouTube in general. He was a super chill dude that I instantly connected with, as if we had known each other for years.

After parting ways, I shopped a little bit and went back to my hotel to take a nap. I slept for about two hours before getting ready again and going back out. I wanted to stay out as late as I could since I heard Fanime runs 24 hours a day. I was very curious to see what the night life at this convention would be like.

I cosplayed Trainer Red from the manga version of Pokemon yet again. It’s one of my classics by now. I was originally going to be Red for the first day, but I heard there was a Pokemon gathering the second day, and I was hoping to see a lot of Pokemon cosplayers around. The Pokemon gathering was around 11am – way too early for me to go. In fact, I didn’t make it to any gatherings for Fanime. I was mostly scoping things out and hanging with some friends.

I'm ready for #fanime day 2 as red from #Pokémon. How many people will call me ash today? #fanime2017

Around 9pm I decided to go to the dance hall. The convention center was relatively empty compared to how packed it was earlier that day. Saturday does seem to be the busiest day for conventions. When I got to the rave, there were only a handful of people dancing. There were three rooms dedicated to dancing, all with three different DJs. Two of the rooms were incredibly small, as if a max of 30 people could fit in there. The other room was massive, which is where I had decided to go. As the night went on, more and more people came in to dance. I was having the time of my life. While on the dance floor, two girls caught my eye. One had this incredible death stare as the group circled around dancers. I thought it was an Instagram friend of mine, but it turned out she was some complete stranger. Quick side note: Fanime doesn’t allow people to do any crazy dance moves like backflips or hand stands. If you try, they’ll warn you once or twice before kicking you out.

As I was leaving, the same two girls stopped me and chatted for a little bit. I gave them my cosplay cards and told them to message me. When I got back to the hotel room, I noticed one of my gym badges was missing! I guess I was partying too hard and shook it loose or something.