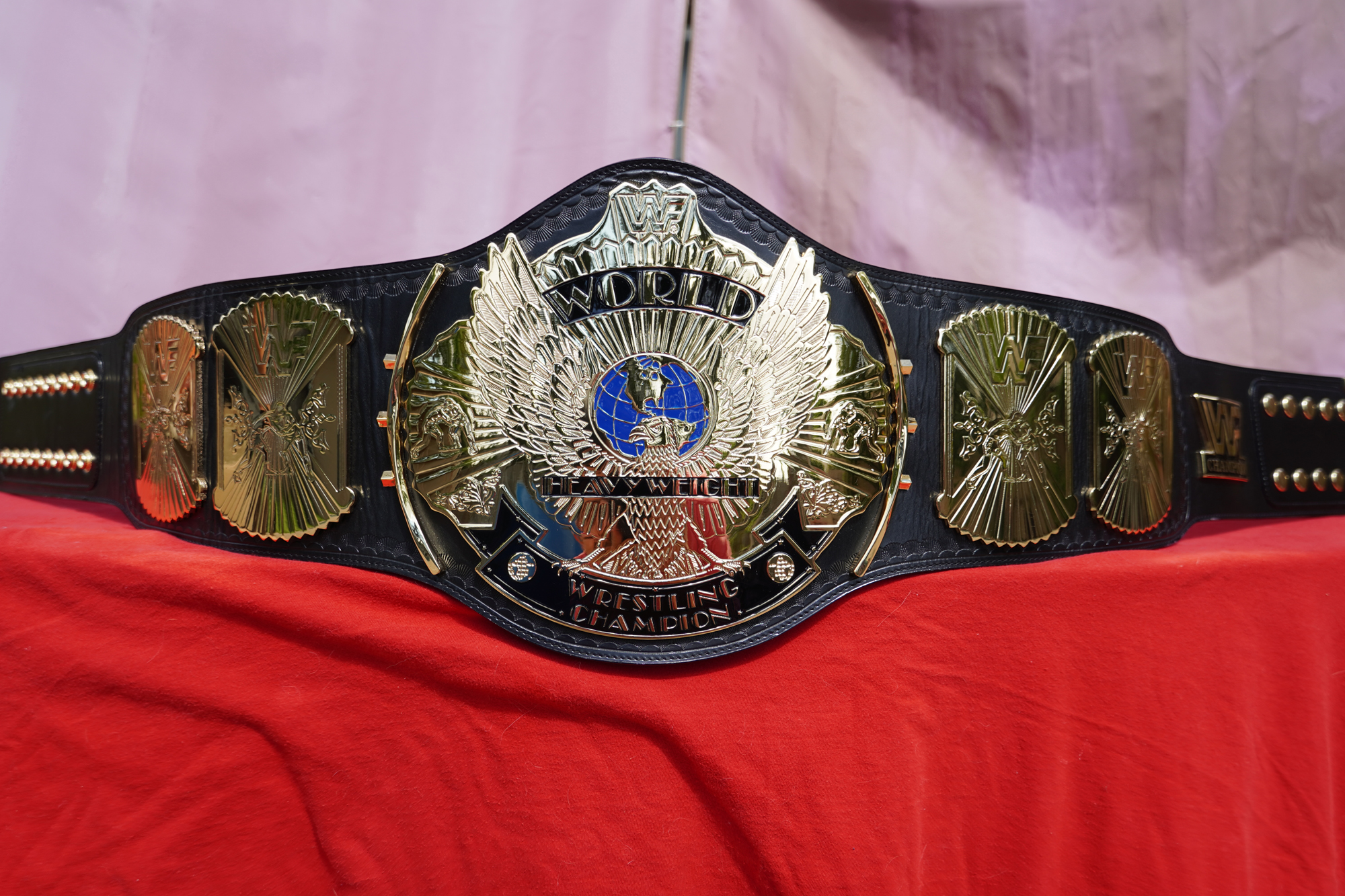 Unfortunately, even though the plates are thicker, the etching on top of the plates is the same as the 2mm plates. That means the designs that are etched into these plates are about 1mm deep.

The design of the Winged Eagle WWF Championship replica by Figures Toy Company is pretty close to the original by Reggie Parks. However, the wrestlers on the side plates and the tiny globes on the main plate aren’t as precise as the real deal. I took the exact measurements from the WWE Shop release because they look to be the same.

The main plate measures 8.94″ x 9.84″ and is almost in the shape of a plus sign. This seems to be the only plate that has a slight curve to it. The very top of the main plate features the WWF logo with a tiny R in a circle, which means registered trademark. This is the only logo on all plates that includes a circled R. The points of the W extend out of the plate, giving it the appearance of a crown. Below the logo is the word “WORLD” etched in gold on top of black paint.

In the center of the main plate is a navy-blue globe with golden continents. The head of the eagle overlaps with the globe etching, and its wings extend out beyond the word “WORLD” and passed the edges of the main plate. A total of 11 and two-halved bars extend upward behind the word “WORLD” but stop before reaching the edge. The word “HEAVYWEIGHT” is etched in gold on black paint on top of the chest of the winged eagle.

The entire bottom curve of the main plate has a black banner with the words “WRESTLING CHAMPION” etched in gold. On the left and right sides of that same black ribbon are two golden globes etched into the plate. The globe on the left looks as if it has North America, South America, part of Europe and part of Africa, and the globe on the right looks like the design has been flipped rather than etching the other side of the globe.

To the left and right sides of the main plate are curved and twisted bars that extend from the top to the bottom of the belt. They attach to the strap with three horizontal bars that screw into the back.

The first side plates are exactly the same as one another and measure 5.04″ x 3.5″. They feature two wrestlers grappling in the center of the plate. The WWF logo is etched near the top of the plate, but does not extend outward like the main plate’s logo. A total of 13 points extend out from the wrestlers beyond the edge of the side plate, and 13 more extend out of the bottom. What appear to be leafed etchings pop out of the plates to the left and right of the wrestlers.

All five plates and the two twisted bars are surrounded in a seashell tooling on a black strap. The wings of the eagle extend just passed the seashell tooling, but the WWE logos and crown-like edges of the plates do not go beyond the tooling.

Just before the snap box on the right is a WWE Champion logo plate. The logo plate measures 2.48″ x 2.01″. The ends of the leather strap have snap boxes sewn around the 5×2 female snaps and 8×2 male snaps, though there isn’t any design pressed into these snap boxes. The very right-edge of the belt has a metal tip with the same light-gold plating with a mirror finish, as all other plates on the belt.

This belt weighs so much more than all other replicas due to the upgraded strap and thicker plates. The leather could be softer and more flexible, but is still a standard quality leather belt similar to ones you would find at your local retail shop. The official figures toy company information is imprinted on the back of the strap.

The thicker plates are nice, but the shallow etching really takes away from the quality. The WWE Shop release of the winged eagle and the Master Series version of the winged eagle from Figures Toy Co have thick plates and deep etching, giving higher quality to the design.