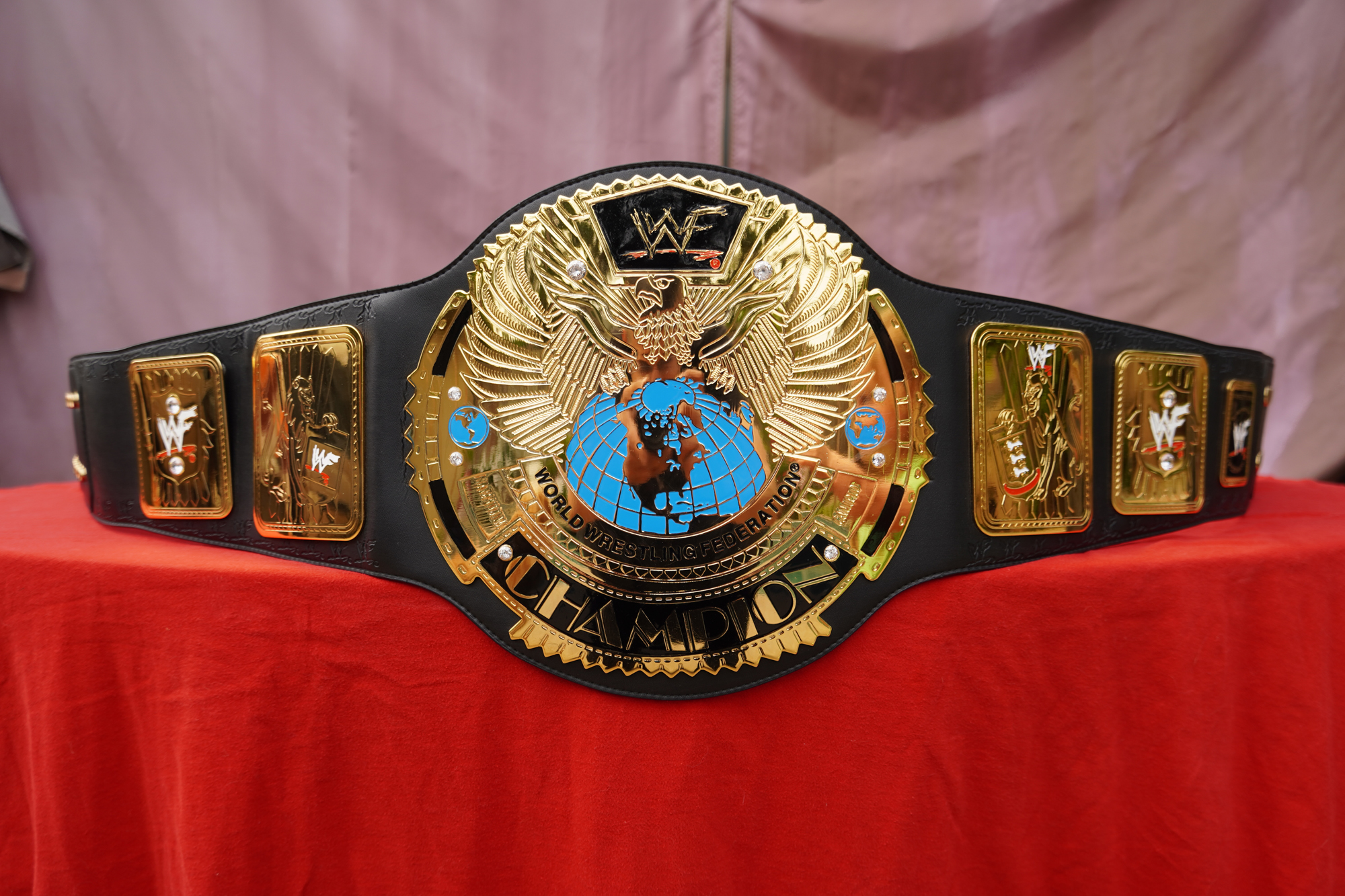 At the height of the attitude era, the WWF debuted a new championship. Known as the Big Eagle, this WWF Championship was manufactured by Figures Toy Company and mass produced.

During the late 90s, professional wrestling hit an all-time high. Fighting for the top of the mountain during this “attitude era” was the World Wrestling Federation. In March of 1998, this new WWF Championship belt was unveiled for Stone Cold Steve Austin. This design lasted nearly four years before being unified with the WCW Championship in December of 2001 by Chris Jericho. The Big Eagle was still held by the WWF Undisputed Champion until April of 2002 when a new belt was revealed and given to then-champion Triple H.

This WWF Championship replica was manufactured by the Figures Toy Company in 2001, the same year the WWF purchased both WCW and ECW, ending the Monday Night Wars and creating a monopoly. The belt features a total of six zinc alloy plates on a polyurethane strap. All plates have a light gold coloring and mirror finish, and are 2mm thick, meaning the etching is very shallow and can be tough to read.

The WWF logo is etched in gold at the top with a red painted underline within a black painted pentagon. A total of 26 points extend outward beyond the edge of the plate.

Below the logo is an eagle extending its wings from the middle of the plate towards the edges. On the eagle’s chest is half of a large globe with North America at the center. This globe has golden continents, golden longitude and latitude lines, and a light blue painted ocean.

Below the main globe on the center of the main plate are the words WORLD WRESTLING FEDERATION painted in black. Below this are 29 short, downward points etched in gold. Some points look like triangles and some look like pentagons.

The first two side plates measure 4.6 inches tall by 3.8 inches wide, and are the only side plates with different designs from one another. The left side plate has an etched lion holding a shield with WWF logo that is painted white and red. The right side plate has the white WWF logo at the top of the plate. In the center is an etched lion holding a shield with a painted white McMahon family crest. Below the crest is a red banner with white words that read “Sic nos sic sacra tuemur.” This translates to “Thus we guard our sacred rights.” Six points extend to the top and bottom of the side plate, etched behind the lions.

Some WWF replicas also came with a sixth plate, or third side plate, that reads “PROPERTY OF THE” on top, followed by “WORLD WRESTLING” above a large WWF logo and “FEDERATION” below this same logo. All these words are gold on a black background, but the WWF logo is painted white with a red underline. This plate measures 2.8 inches tall by 2 inches wide.

The strap itself is made out of polyurethane. It is a stiff material meant to display the belt as a trophy, not to replicate the flexibility of the leather seen on TV. The belt strap measures 53in long, and has a WWF tooling imprinted around the side plates. All the manufacturing and licensing information is imprinted on the back of the strap.

Unfortunately, the design of this replica is not the same as the original WWF Big Eagle. The side plates are simplistic and smooth while the real belt has a textured background behind most of the WWF scratch logos. And although these replicas have slight curves, the real Big Eagle seemed to have a massive curve in comparison. Also, the 2mm plates made the etched words a little tough to read, and some of the etched words came out sloppy.

Even with its flaws, the WWF Championship from the Figures Toy Company is a decent replica. Many were manufactured, and they can often be found on eBay for around $500 USD. The WWE Shop re-released the Big Eagle with WWE logos and the words WORLD WRESTLING ENTERTAINMENT on the main plate. The WWE Shop replica has much thicker plates and deeper etching, but the lack of WWF logos makes it less desirable to most fans and collectors.