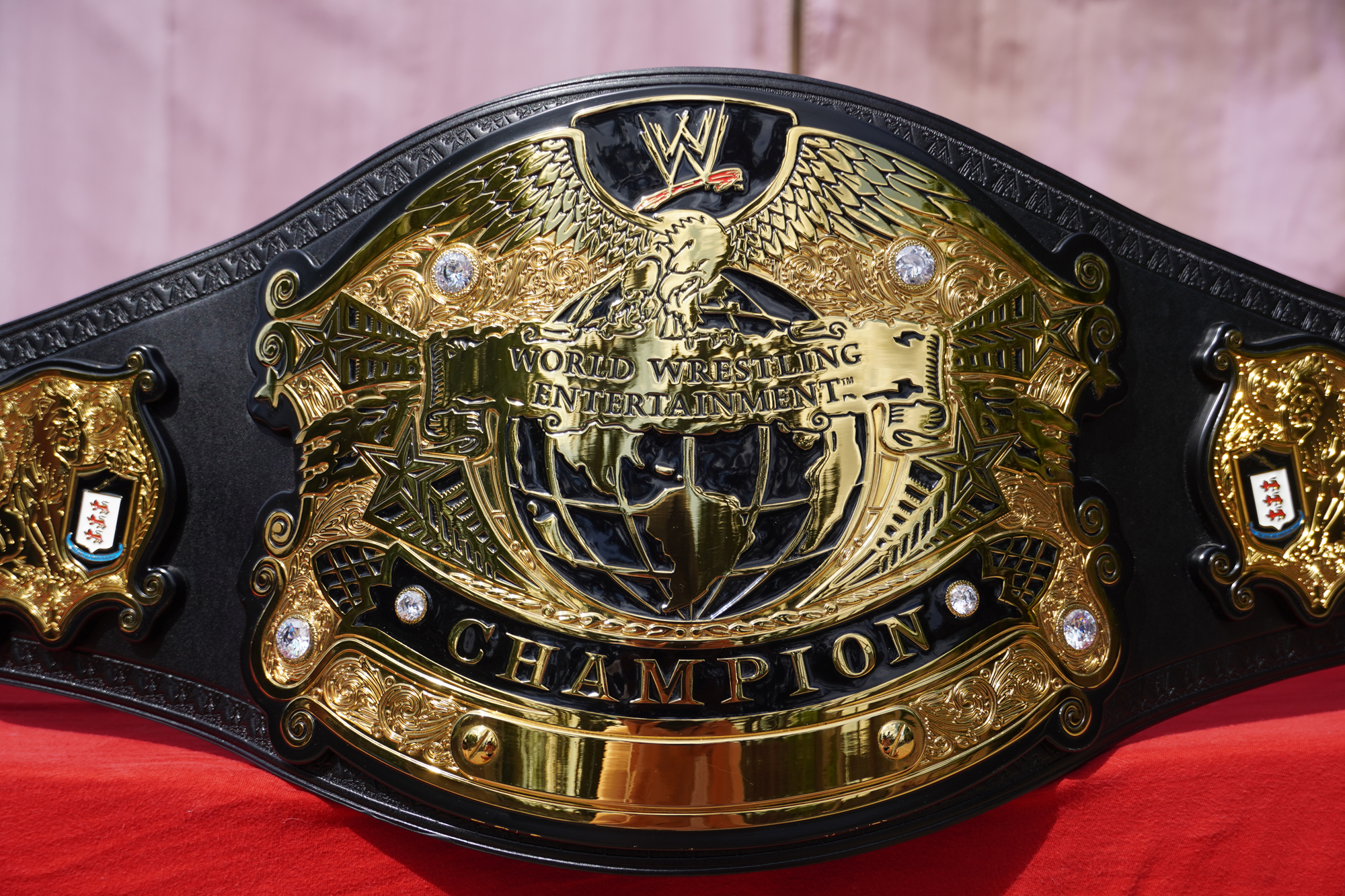 After getting the F out, the WWE Undisputed Championship V2 was created as an update to the original. This replica from the WWE Shop is massive and the best replica they manufacture.

With all that story out of the way, let’s look at the replica itself! Make note, this particular replica was manufactured by the WWE Shop. There is a Figures Toy Co replica of the belt, but it is much thinner and cheaper when compared to the WWE Shop replica.

The plates on the WWE Undisputed Championship V2 are made out of a Zinc Alloy. There is a large main plate, two first side plates with a lion etching, two second side plates with a WWE logo etching, and one third side plate with a property of WWE etching. All six plates are 6mm thick and are outlined with black paint. The black outline is an easy way to tell the V1 from V2 Undisputed Championships from the WWE Shop.

The main plate of the WWE Undisputed Championship V2 is mostly the same in design as the first version, but there are fewer spots with black paint, and the deeper engraving around the globe make the design really shimmer. It looks like a design that was fitting of the big eagle and big gold unification.

At the very bottom of the main plate is a curved nameplate with faux front-mounted screws. The nameplate actually screws off from behind like all other plates on the belt. Pre-engraved nameplates can be purchased from the Wrestling Super Store, the home of Figures Toy Company products, the original maker of WWE championship replicas.

The four corners of the main plate are mostly engraved in the version 2 design. This change from black paint to floral engraved gold make it look magnificent. It truly pops out from the mirror-finished globe and eagle design on the main plate.

Four large stones and two small stones are placed on the front main plate, and an additional two small stones are placed on each of the second side plates above and below the WWE scratch logos. The jewels that come with the belt are cheap plastic rhinestones. The base stones weren’t great, so I decided to pay to have them professionally restoned with cubic zirconia. Cubic zirconia sparkles with all the colors of the rainbow in sunlight. You can see the difference in the pictures below.

All side plates have a similar pattern as the main plate. They often have these floral designs in gold with some black paint in the center. All side plates are 6mm thick and outlined with black matte paint.

The first side plates which measure 4.25″ x 4.38″, both feature a lion engraving holding a black shield. This shield is actually the McMahon family crest. Around the lion are some floral designs, similar to the big gold.

The second side plates measure 3.38″ x 3.5″ and display the WWE scratch logo on a black shield. The black shield has two small stones above and below the WWE logo. Like the first plate, floral design outlines the entire black shield, reminiscent of the big gold design.

The third plate measures 2.9″ x 2.9″ and is the property of the WWE plate. This plate has a black shield that reads “Property of World Wrestling Ent. Inc.” above and below the WWE scratch logo. Just like the second side plates, floral design outlines the entire black shield.

The strap is made out of polyurethane. This is a stiff material meant to display the belt as a trophy, not to replicate the flexibility of the leather seen on TV. The belt measures 56.63″ x 11.38″ and is 6mm thick. The back has the official licensed product sticker and patch sewn into the belt.

A “WWE Champion” tooling is stamped throughout the top and bottom of the strap until the snap boxes on the ends. Another design is pressed into the faux leather before the snap boxes, and the snap boxes themselves are pressed into the polyurethane instead of sewed on. In fact, there appears to be no stitching on the front of this belt at all. Exactly like the V1 replica, the V2 replica has 5×2 female snaps and 8×2 male snaps.

In total, the WWE Undisputed Championship V2 belt weighs 8.05 lbs. and can fit up to a 46 inch waist size. It is a massive replica that is beautifully constructed, for the most part. However, I and many other collectors have come across the black paint chipping off. When I sent my belt to get restoned, the service also touched up the black paint on my plates. Many have told me to use enamel paint and a toothpick for touch ups, but I was too afraid to get paint everywhere.

With the exception of the black paint coming off, everything else about this belt is excellent, including the curved main plate. I highly recommend buying the WWE Undisputed Championship V2 replica from the WWE Shop. Some fans might want to buy an actual leather belt instead of settling for polyurethane, and the WWE shop offers a deluxe version of the WWE Undisputed V2 belt with top grain leather and Swarovski crystals! However, the price will jump from $399.99 to $999.99 USD. Either take advantage of sales at the WWE Shop or buy a used replica and pay separately for the upgrades from third-parties.