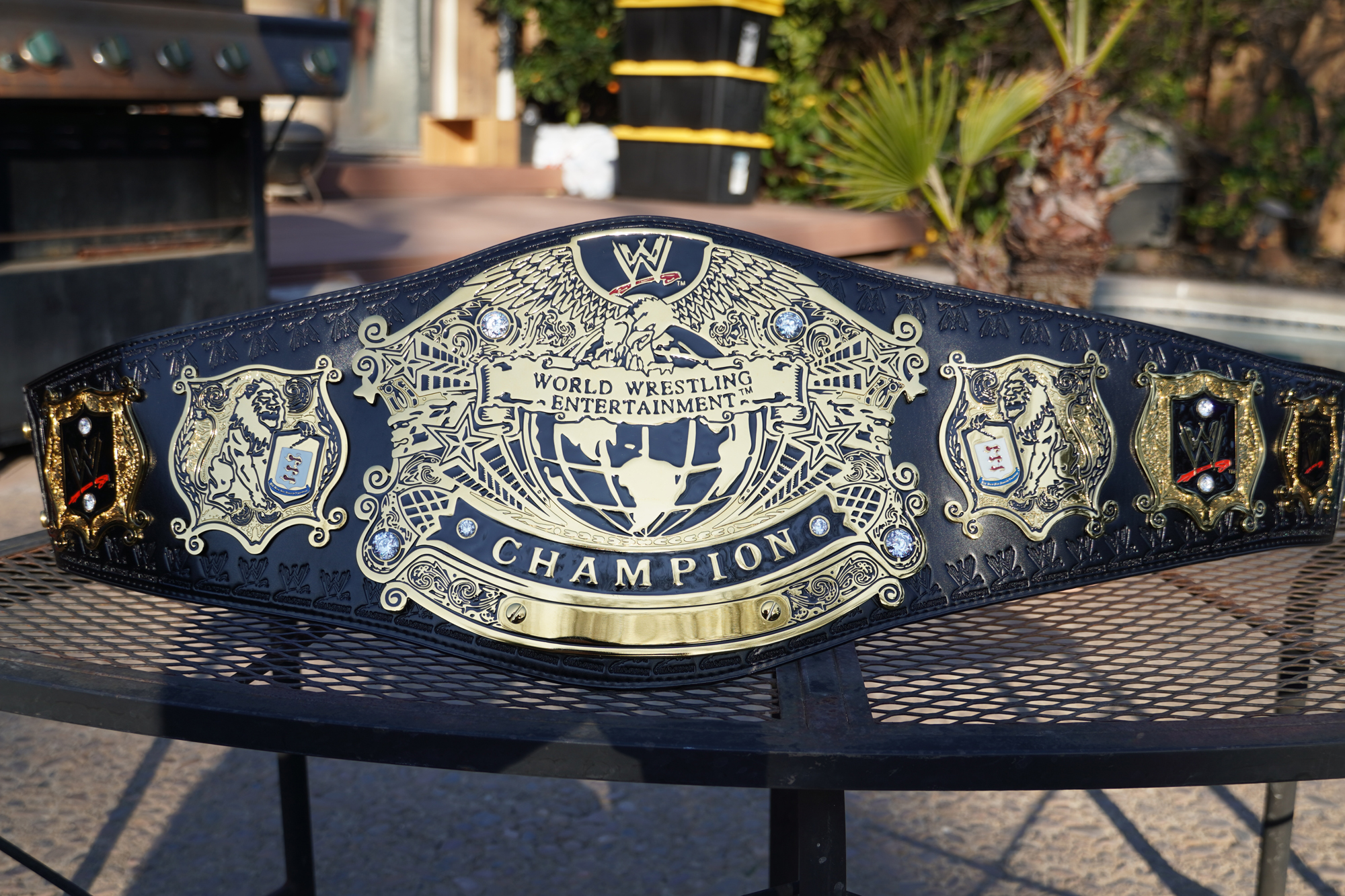 The convoluted story behind the belt: In December of 2001, Chris Jericho became the first WWF Undisputed Champion by defeating both Stone Cold and The Rock in the same night — with some help. He carried around both the WWF Championship (Big Eagle) and the WCW Championship (Big Gold) for 98 days until defeated by Triple H at WrestleMania X8 in March of 2002. The following night on Monday Night Raw, Triple H was given a newly designed belt, this WWF Undisputed Championship. The same month, with an overflow of talent given the fact that Vince McMahon purchased ECW and WCW the previous two years, the WWE introduced the brand split by placing superstars on Raw or Smackdown only, though some champions were able to travel between shows. Months later in May of 2002, the WWF would transition to the WWE after a lawsuit with the World Wildlife Fund for Nature, and this title was renamed the WWE Undisputed Championship. Brock Lesnar would eventually became the youngest WWE Champion in history by beating The Rock at SummerSlam in August of 2002. The next night, Lesnar signed a contract to appear exclusively on SmackDown. The World Heavyweight Championship was then re-introduced in September of 2002 for Raw, and this particular title became the WWE Championship once again.

The main plate features the WWE scratch logo at the top in gold with a red underline, an eagle below it sitting on a scroll that reads “World Wrestling Entertainment TM” in front of a globe. Four stars are drawn shooting out both sides of the globe, and the word CHAMPION is inscribed near the bottom. At the very bottom of the main plate is a curved nameplate with faux front-mounted screws. The nameplate actually screws off from behind like all other plates on the belt. Pre-engraved nameplates can be purchased from the Wrestling Super Store, the home of Figures Toy Company products, the original maker of WWE championship replicas.

It appears that the main plate is about 3mm thick while all four side plates are only about 2mm thick. They are all made of a zinc alloy and are mostly flat. The etching in each plate is pretty deep considering the fact the plates are so thin.

Four large stones and two small stones are placed on the front main plate, and an additional two small stones are placed on each of the second side plates above and below the WWE scratch logos. The jewels that come with the belt are a cheap plastic rhinestone. The base stones looked so bad that I decided to pay to have them professionally restoned with cubic zirconia. All pictures of the WWE Undisputed Championship in this review have cubic zirconia that sparkle with all the colors of the rainbow when in direct sunlight or some LED lights.

The first side plate displays a lion holding the McMahon family crest. Black paint outlines the lion and some of the floral design on the edges.

The third side plate reads “Property of the World Wrestling Entertainment TM.” It has a gold WWE scratch logo with a red underline on a black plate, which is layered on a gold plate. This gold plate also has the same floral design as the second side plates, but is the smallest plate on the belt.

The strap itself is made out of polyurethane, and has a glossy coating. It is a stiff material meant to display the belt as a trophy, not to replicate the flexibility of the leather seen on TV. The belt measures 50 inches long by about 9.5 inches tall in the center. A WWE Champion tooling is stamped throughout the top and bottom of the strap until the snap boxes on the ends. Another design is pressed into the faux leather before the sewn on snap boxes and the 5×2 female snaps or 8×2 male snaps.