The Tale of the Bamboo Cutter 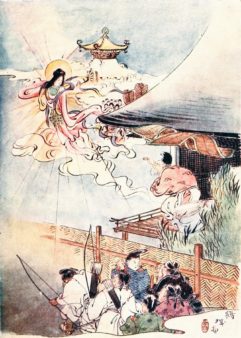 Long ago, there was an old man named Taketori no Okina (竹取翁 “the Old Man who Harvests Bamboo”). He lived childless and in poverty with his wife. One day while cutting down bamboo in the forest, he saw a mysterious shining stalk of bamboo. He quickly approached the stalk and cut it down. Inside was a tiny girl the size of his thumb.

Since Taketori no Okina and his wife were unfruitful when it came to children, he brought this little girl home to care and look after. They named her Kaguya-hime (かぐや姫 accurately, Nayotake no Kaguya-hime, “Shining princess of the supple bamboo”). Together they raised her until she grew into a beautiful, young lady of normal size. While she grew up, Taketori no Okina continued chopping down bamboo. Oddly, some of the bamboo had nuggets of gold inside. Not only did the couple now have a beautiful child, but they became rich as well!

As time went on, word of her beauty spread throughout the land. Five handsome and wealthy Princes traveled far and wide to ask for her hand in marriage. Taketori no Okina agreed, but only if Kaguya-hime accepted one as her husband.

For whatever reason, Kaguya-hime didn’t want to marry any of them. She told the Princes that if they could complete a certain task, should would accept their marriage proposal.

The first prince was told to travel to Nepal. While there he must search for a bowl, but not just any bowl, but the legendary begging bowl of Buddha. The second prince was given the task of bringing back a tree branch. However, the branch had to be off of a tree from the fabled island of Hōrai, where jewels grow on trees like fruits. The third prince was entrusted with locating the mythical robe of the fire-rat. The fire-rate was said to reside in China, and had fur that would resist all flames. The fourth prince was tasked with placing a jewel from the neck of a dragon. The fifth, and final, prince was charged with locating a cowry shell born of swallows.

The first prince realized it was impossible to find the legendary bowl of the Buddha, so he devised a plan to trick young Kaguya-hime. He came back with an ordinary bowl which he claimed was the great Buddha’s. Seeing that the bowl did not shine with holy light, Kaguya-hime discerned the counterfeit and denied his marriage proposal. The second and third princes tried to cheat the princess with fraudulent items as well, but Kaguya-hime was not overcome by their falsehoods, and denied both of their marriage proposals. The fourth prince ran into a terrible storm while traversing the sea and gave up on his quest before any harm was incurred. The fifth king didn’t want a little danger getting between the ultimate prize that was Kaguya-hime, and was ultimately killed before he could locate his mythical item.

Word of the five princes and Kaguya-hime’s tasks quickly spread throughout the land. It even reached the Emperor of Japan, who had to see this wise and beautiful girl for himself. He ventured off and fell in love with Kaguya-hime like all the others that had laid eyes upon her beautiful face. And just like all the others, Kaguya-hime refused his offer of marriage. Since he was the Emperor of Japan, Kaguya-hime did not impose a task on him. She told him they could not marry since she was not of his country. However, the Emperor was different from the others. The two remained amicable and kept in touch. At the end of every letter, the Emperor would ask for Kaguya-hime’s hand in marriage; however, Kaguya-hime would gently rebuff his proposal, stating the same reason each time: she is not of his country and cannot marry the Emperor and live in the palace.

When the Summer months arrived, Kaguya-hime’s foster parents would catch the young woman staring at the moon with tear-filled eyes. They questioned her behavior, but Kaguya-hime wasn’t able to tell them what was making her so sad. After her demeanor became increasingly erratic, she told her parents and the Emperor an unbelievable story: Kaguya wasn’t from this world. She was actually a Princess from the Moon. In some versions of the story she was transported to Earth to be protected from a great war. In other versions she was sent to Earth to form material attachment as punishment for some crime. The gold found in the stalks of bamboo was actually sent from the Moon people as an allowance for raising Kaguya-hime. Now her time had come to an end, and her people would be taking her home soon enough.

Once the Emperor heard of this news, he sent a number of guards to prevent Kaguya-hime from being taken away. When the day of her departure arrived and the people of the Moon came to Kaguya-hime’s home, a bright light blinded and impaired the guards, successfully bypassing all obstacles. Kaguya-Hime’s foster parents begged and pleaded with the real parents to allow Kaguya-hime to stay, but they refused and ignored their pleas. The people of the Moon presented Kaguya-hime with a feathered robe and a bottle of the elixir of life. This would allow her to return to the Moon and live forever.

Kaguya-hime asked the Moon people to wait one final moment. She went to her room and wrote a letter to the Emperor of Japan explaining that she did love and want to marry him, but she knew she must eventually return home. Since the two couldn’t get married, Kaguya-hime wanted him to have immortality by drinking the elixir of life.

After attempting to compose herself, Kaguya-hime returned to her parents. She removed her robe and gave it to her foster parents as a parting gift. She took a drink from the elixir of life and sent the letter off with the panacea. Her real parents then placed the feathered robe on Kaguya-hime, which caused her to forget all the sadness and compassion for the people of Earth.

Taketori no Okina and his wife became very sad, and would later give up on life in their old age. For without their daughter, they had no more energy to go on. The Emperor of Japan eventually received the package from Kaguya-hime, but refused to drink the elixir of life. Without Kaguya-hime by his side, he had no longer had a reason to live forever. The Emperor ordered his guards to take the letter and the elixir to the tallest mountain in the land and burn it in hopes that it would reach Kaguya-hime on the Moon.

Legend has it that the word immortality, 不死 (fushi), became the name of that mountain, Mount Fuji. It is also said that the kanji for the mountain, 富士山 (literally “Mountain Abounding with Warriors”), are derived from the Emperor’s army ascending the slopes of the mountain to carry out his order. It is said that the smoke from the burning still rises to this day. (In the past, Mount Fuji was much more volcanically active.)

The story above is a retelling of The Tale of the Bamboo Cutter, a myth from 10th Century Japan. It’s also known as The Bamboo Cutter and the Moon-child, or The Tale of Princess Kaguya. The story has many versions which I try to mention, but I based the preceding piece off of the version on this website. And the last part was taken directly from Wikipedia because it’s important to the mythology.