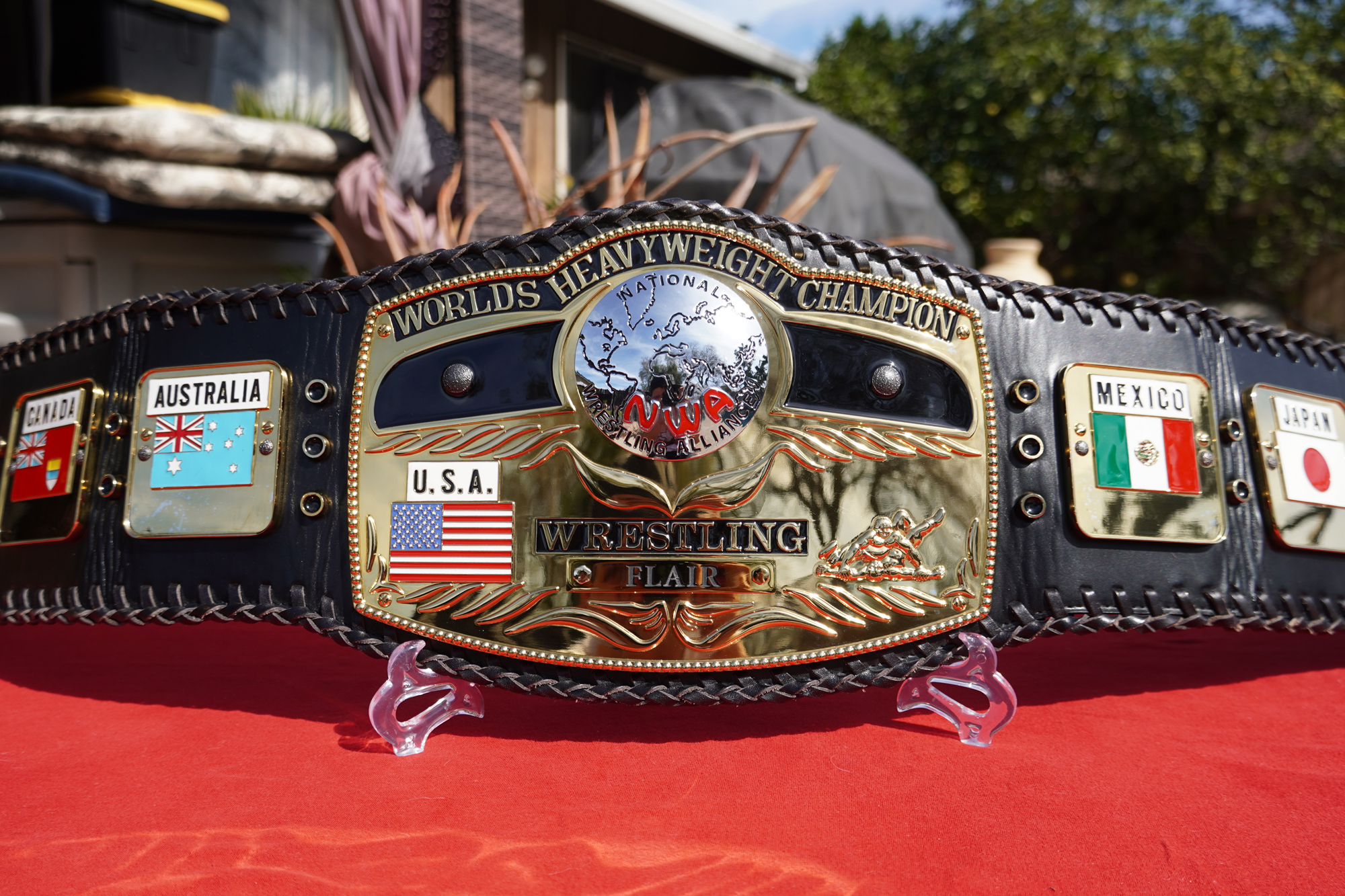 The domed globe, the ten pounds of gold, the NWA Worlds Heavyweight Championship is a legendary belt, and this ultra deluxe replica by figures toy company is magnificent!

The National Wrestling Alliance (NWA) is a legendary institution that was once the world’s largest wrestling organization. It began as a governing body of a group of independent wrestling promotions throughout North America during the territory era of wrestling. They have claimed that their world championship can be traced back to the very first wrestling world’s championship.

This ultra deluxe replica has much thicker plates than the average Figures Toy Co replica, at 5mm to 6mm thick depending on the area of the plate.

The NWA Worlds Heavyweight Championship was also known as the domed globe because of the globe the pops out of the main plate, which is also the thickest part of the belt. This globe is silver with a mirror-finish, continents are etched into the globe and outlined in black paint, NATIONAL is etched and painted in black at the top of the globe, WRESTLING ALLIANCE is etched and painted in black at the bottom of the globe, and NWA is painted red just above the WRESTLING ALLIANCE etching.

The center plate measures 9in or 22.9cm tall and over 11in or 28cm wide. The top of the plate above the globe reads Worlds Heavyweight Champion in gold with a black background.

To the left and right of the globe are black studs on black paint. There are other versions of the NWA Worlds Heavyweight Championship with diamonds instead of these black studs, but it would seem this 80s version featured these pieces.

On the bottom-left corner of the main plate is the US flag with all fifty stars and 13 bars, though the blue behind the stars are a baby blue instead of a navy blue. Above the flag is a white painted box holding U.S.A. etched and painted in black. In the center of the main plate is a black box with the word WRESTLING etched in gold. Beneath that is a removable nameplate that unscrews from the back of the strap.

On the bottom-right corner of the main plate is a 3D etching of two wrestlers grappling, with one pinning the other.

Four side plates with four different national flags are featured on this belt: Canada, Australia, Mexico, and Japan. Each plate is about 3 1/8th in tall and wide or about 7.9cm with simulated front-mounted screws and black studs similar to the studs featured on the main plate. The screws do not actually screw the plates into the strap, but instead each plate has four posts and screws in the back.

Canada’s flag is the older version before it was switched to the red maple leaf, and the blue in Australia’s flag is a baby blue instead of navy blue. Regardless, the etching and painting of each nation’s flag is marvelous and incredibly detailed. The plates themselves have a gold colored mirror coating. My replica has spots where the gold has begun to wear off, but I purchased the belt used.

The strap the plates are attached to is a simulated leather with what appears to be triple braided simulated leather around the edges. The braided pieces actually smell like leather, and I wouldn’t be surprised if those pieces were some type of real leather. The base strap itself is stiff and feels as if it has cardboard or something inside to keep the belt upright. The entire strap measures 56.25 inches long, and can fit up to a 50-inch waist. The officially licensed product patch can be found sewn into the back of the strap, just like with all other replicas by Figures Toy Co.

All in all, this is an excellent replica from the Figures Toy Company with highly-detailed 3D etching and precision painting. The downsides are that the blue paint on the national flags are too light of a blue, and the strap is still a cheap simulated leather. Previous ultra deluxe replicas from Figures Toy Company have real leather straps and very heavy plates that were 4mm thick. It would seem Figs went with 3D etching instead of heavier plates, and maybe the braided parts of the strap are a leather while the rest of the strap is simulated leather. Either way, this is an excellent replica of the NWA Worlds Heavyweight Championship, also known as the 10 lbs. of gold, also known as the domed globe, and I highly recommend purchasing this ultra deluxe replica if you get your hands on this version replicated from the championship belt used in the 1980s.