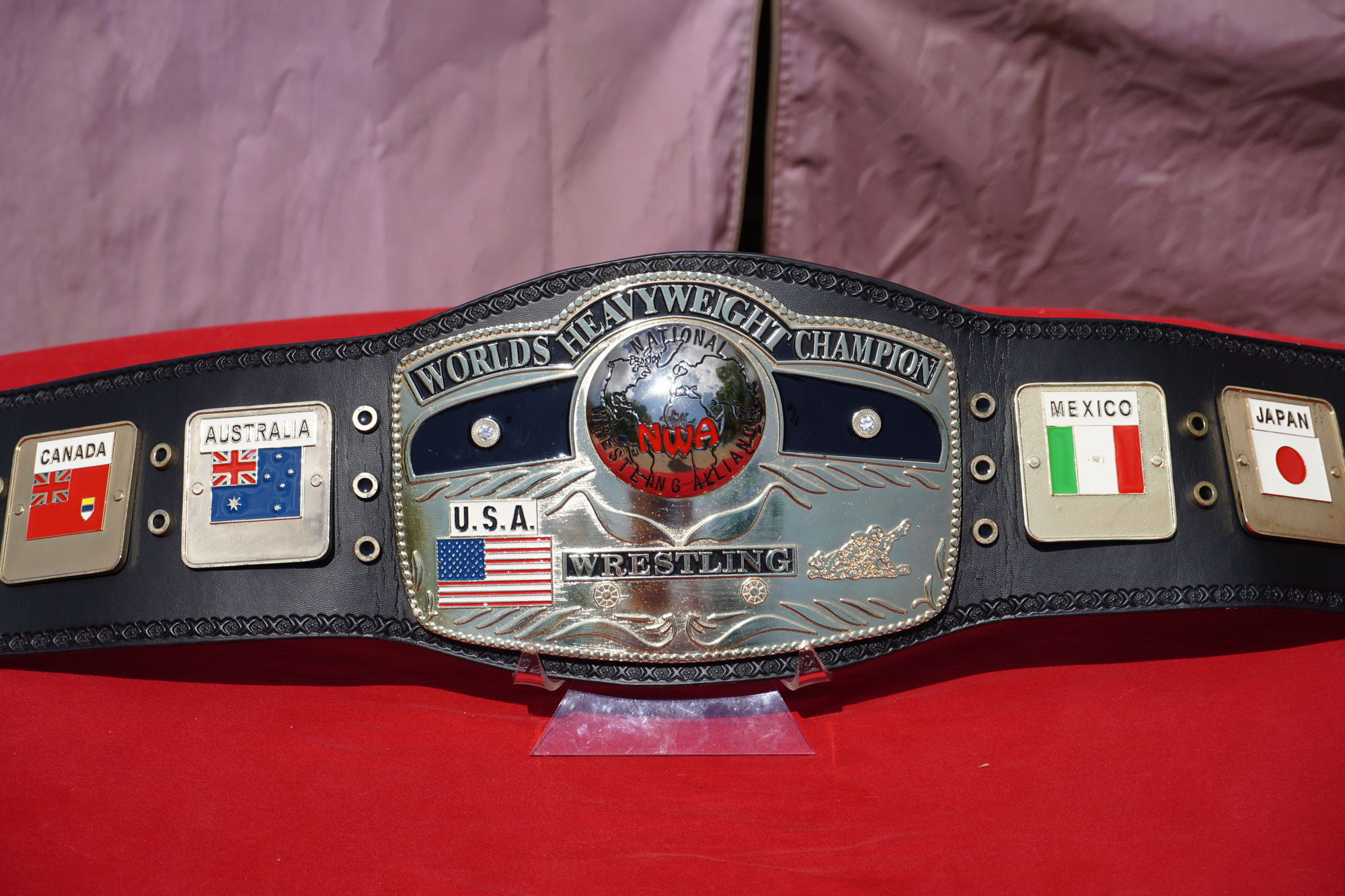 This early 2000s version of the NWA Worlds Heavyweight Championship had a massive domed globe and two faux diamonds. See in great detail how this replica from Premier compares to other replicas.

The NWA Worlds Heavyweight Championship, the ten pounds of gold, the domed globe, whatever you want to call it, this legendary belt has undergone numerous design alterations over the many decades it has been active. This particular replica is based off of the design by Reggie Parks, which was used in the early 2000s with the promotion NWA-TNA.

Unlike all other belts I’ve collected and reviewed, this replica belt was manufactured by a company called Premier. I couldn’t find much information on this company because it appears they went out of business after competing with the Figures Toy Company.

All plates are at least 4mm thick, though the globe on the main plate extends far beyond 4mm. None of these plates have a mirror coating except for the silver globe, though this isn’t necessarily a negative. The design choice of the plates makes the replica appear more like a worn and used belt that you would have seen on TV.

The main plate measures approximately 17.5cm tall by 26cm wide. It is outlined with a dotted or circled 3D etching. The large domed globe is always the highlight of the main plate. This globe is silver with a mirror-finish, continents are etched into the globe and outlined in black paint, NATIONAL is etched and painted in black at the top of the globe, WRESTLING ALLIANCE is etched and painted in black at the bottom of the globe, and NWA is painted red just above the WRESTLING ALLIANCE etching.

To the left and right of the domed globe are two faux diamonds within gold jewel holders. These holders have tiny dots extending outward for the most intricate detail of the entire belt. These are placed within large black spaces that extend towards the circular edges of the main plate. The black paint is glossy and shines well in the light.

The 3D etching is okay throughout most of the belt, but the two wrestlers on the bottom-right corner of the main plate look like swiss cheese. There is no way anyone can make out what the design is supposed to be unless they’ve seen it elsewhere.

Five national flags span the main plate and four side plates. Most of the flags are painted well, but the flag of Mexico has massive paint overflow that engulfs the eagle in the center. I’ve seen other replicas that don’t look quite as bad, so it is possible that Premier had problems with quality control.

While the flag of the USA is on the main plate, the four side plates feature the older version of the Canadian flag before it was replaced with the maple leaf, the Australian flag, the Mexican flag, and the Japanese flag. Above each flag is the name of the nation in black inside a white rectangle. All four side plates measure 7.5cm wide by 7.5cm tall by 4mm thick. Two dots are 3D etched into the left and right sides of each national flag side plate.

The faux leather strap on this Premier replica is more flexible than the straps from Figs Inc, but it still feels like a cheap pleather material. It measures approximately 49in long by 7.75in tall and connects with 8×2 male snaps and 8×2 female snaps. The licensing and manufacturing information is all imprinted on a patch that is sewn onto the back of the strap.

A tooled flower-like design is imprinted throughout the edges of the belt strap. This was an unusual choice since the NWA Worlds Heavyweight Championship was often placed on a strap with lacing around the edges, but it was most likely to mimic the lacing and save on costs.

All in all, the NWA Worlds Heavyweight Championship from Premier is a decent championship belt replica. Of course, the quality is no match compared to the Figures Toy Company, but it is by no means a bad replica. If you are a fan of the NWA or NWA-TNA, you might want to add this to your collection if you can find one. Then I would recommend buying a new strap.