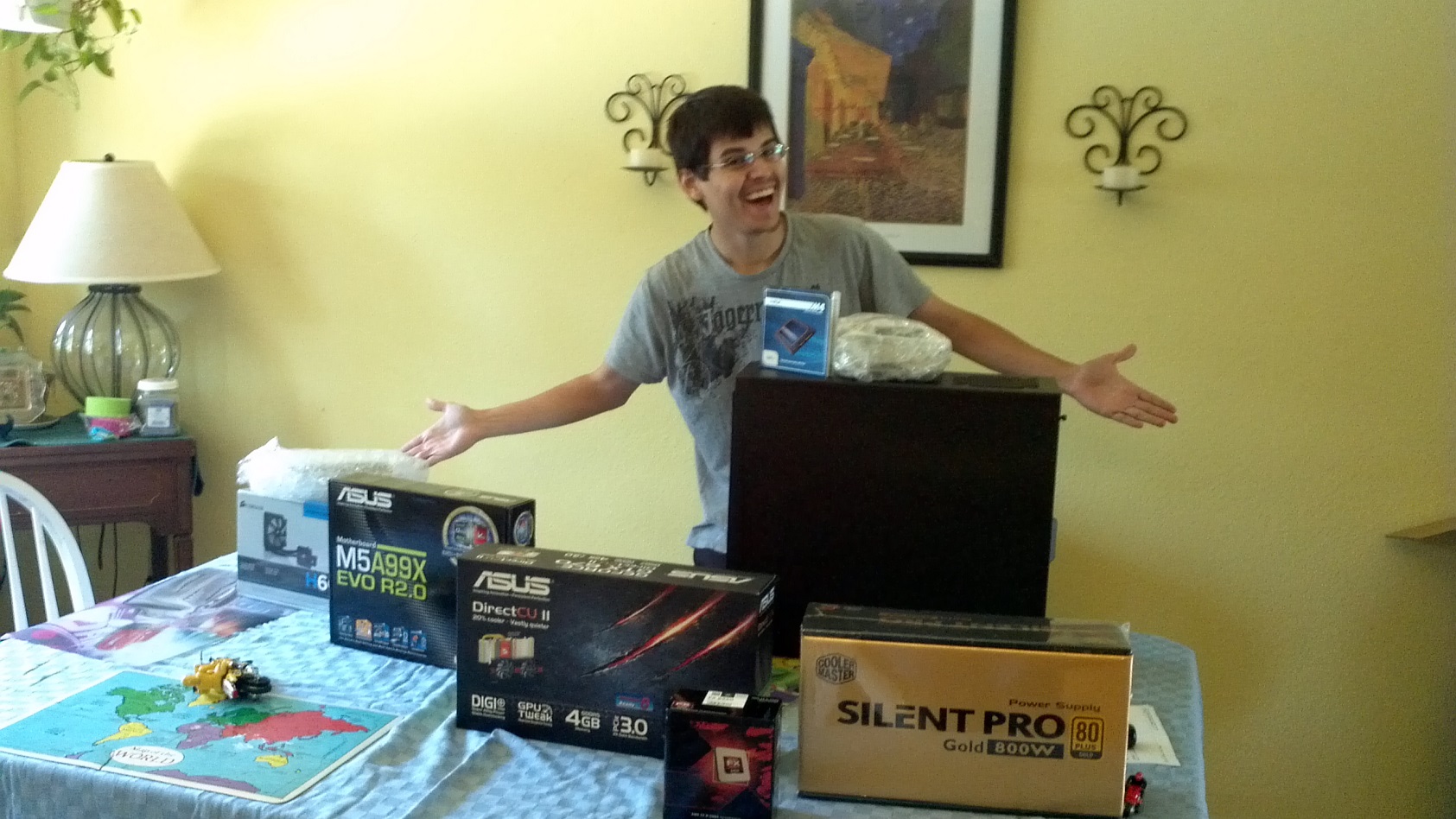 I finally got my first gaming PC. Care to see what I’m running?

For those who have been following me, you may know I’ve been working towards a gaming PC. This is the very first true gaming PC I’ve owned, and I payed for it and built it all myself! I had no idea what to get or how to build it, so I had a ton of help from the IGN Community on the PC Board. I didn’t know how much money I really wanted to spend, all I knew is I wanted to play The Elder Scrolls IV: Oblivion, V: Skyrim, and Battlefield 3 on the max settings. They threw some parts at me, we talked it over while I waited for my checks, and I wound up mixing and matches here and there. The final parts I chose can be seen in a Wishlist on Newegg.com.

Once I had the parts, I had to put them together. I really had no idea what I was doing, so I spent a great amount of time reading instruction booklets — with extremely vague steps — and looking through tutorial videos online. I spent the entire day piecing it together, being careful not to break anything. By the end of the day my fingers were killing me. The computer runs fine now, but I was a bit disappointed with one particular part that was recommended. Apparently, the guys at IGN recommended a small Solid State Drive for the operating system and my games, and they wanted me to put everything else I use on a regular Hard Disk Drive. I really don’t like going back and forth for my stuff, and my Solid State Drive is nearly filled up already, so I wanted to buy a bigger one! All that’s on the current SSD is the Operating System, three or four extra programs, and four games. I understand Solid State Drives are very pricey, but I feel the need to get a bigger one, even though everyone is saying no!

While transferring all my data from my old PC to the new one, my External Hard Drive failed me! I was so pissed off since there was about a terabyte worth of videos and stuff on there. I was able to do a direct link from PC to PC to transfer some stuff over, but there was so much that went erased. Today I was able to remove the external HDD from its case and directly into my new PC, but the contents weren’t saved. Back to downloading all my old stuff, I guess.

Now then, when it comes to the games for my gaming PC, I bought The Elder Scrolls IV: Oblivion, Battlefield 3 Premium, and Metro 2033. Metro Last Light came for free with my graphics card. My PC can run the first two at max settings, but the Metro games need a few lower settings here and there. I plan to buy The Elder Scrolls V: Skyrim Legendary Edition when that releases, which is just over a week. I was a bit disappointed to find out Oblivion didn’t have achievements on steam. I know they had them on the Xbox 360 because I earned them all. It’s probably my favorite game of all time, and I wanted to re-earn them! It doesn’t look like Battlefield 3 has any achievements either, but it runs so smooth and has 64 person multiplayer. I’m more or less fine with playing TES with a keyboard and mouse, but I dislike playing these shooters without a controller. I was thinking of buying a wired 360 controller like the ones I used to have, before they broke that is, but I decided to buy a USB receiver for my wireless ones. We’ll see how that goes.

That’s about all I have to say for my gaming PC. I was trying to make a video of me putting my PC together, but it took so damn long that I sort of scrapped the idea. Anyone else around here a PC gamer? Want to share your experiences with your first Gaming PC?