A series of lengthy cut scenes will play when you reach Zanarkand. When you can take control, head through the ruins up ahead. A treasure chest can be found along the ruined road to the dome. Inside is a Fortune Sphere.

Half-way through the road you’ll get a short cut scene. A short distance ahead is another treasure chest. This one contains the Spiritual Targe armor for Rikku.

The dome is home to many strong fiends. The YKT-11’s can eject teammates from the field with its thrust kick.

Another save sphere is located up ahead. When you reach the intersection, take the short path to the northeast to find a treasure chest containing a Friend Sphere.

Return to the intersection and continue to the northwest. Another treasure chest can be found underneath the bridge just before the exit containing a Lv. 3 Key Sphere.

The next area has a treasure chest slightly hidden on the right side of the hall. Inside is a Luck Sphere. Make your way north and listen to the memories of Braska and his crew. The door ahead leads to the Cloyster of Trials.

For this trial you must step on the correct squares with white spots. Each white spot will light up a series of squares around it, giving a specific colored shape. You must step on the same shapes that light up when you inspect that diagram on the north wall to complete the puzzle. If you step on the wrong spot, the puzzle will reset and you will have to try again. You can see the correct spots in the image below or by interacting with the diagram yourself.

After completing the first puzzle, six pedestals will appear from behind the west and east walls. Only four of the pedestals can be interacted with (press X) and pushed back. Push one at a time to display another puzzle in the next room. Again, you can interact with the diagram on the north wall to see which squares you must step on.

The solution to the top left pedestal’s puzzle is below. 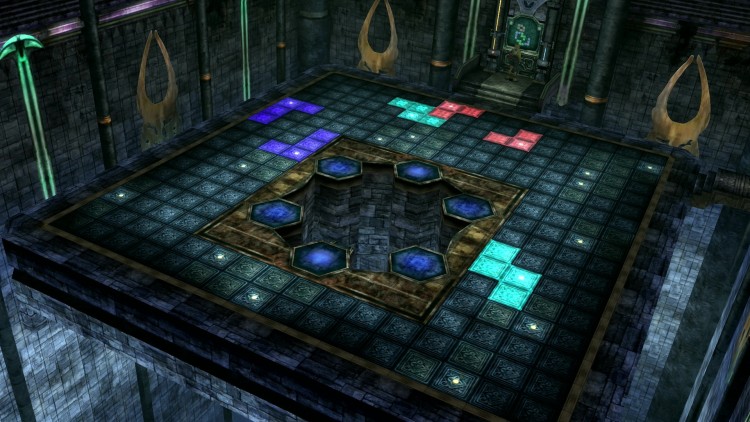 The solution to the bottom left pedestal’s puzzle is below. 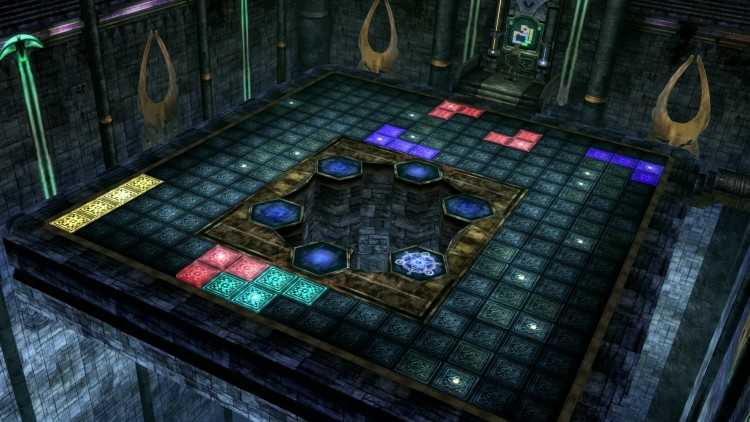 The solution to the top right pedestal’s puzzle is below.

The solution to the bottom right pedestal’s puzzle is below.

Once all four puzzles have been completed, two spheres can be taken from the north wall in the second room. The left sphere is the Kilika Sphere; the right sphere is the Besaid Sphere. Take the Kilika Sphere and place it in the middle left pedestal in the first room. Next, take the Besaid Sphere and place it in the middle right pedestal in the first room. Save your game at the new save sphere and return to the second room to fight a strong boss. Make sure your team has Berserk Ward or Berserkproof armor equipped if available! 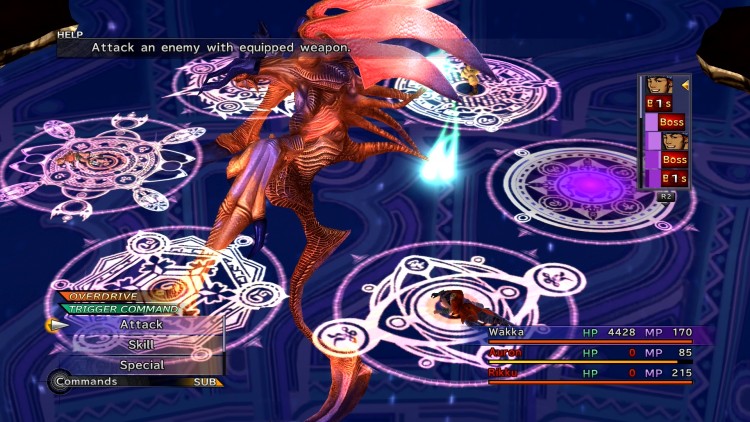 This battlefield is different from the others. You can use a trigger command to move to an empty spot during battle. Try placing two characters behind the Spectral Keeper before attacking, and keep at least one strong character in front that the boss can focus on. All three spots directly in front of the boss will be hit by a powerful attack directly after Spectral Keeper is attacked by anyone.

The Spectral Keeper may also use its Berserk Tail attack during its turn on any of the six spots. This attack will inflict the Berserk status effect. If this happens, cast Esuna or use a Remedy to heal the character. A Berserked character will have stronger physical attacks, but you will not be able to select who they target or what attacks they use.

Caste Haste and Protect spells to hit fast and withstand the damage from the Spectral Keeper’s counter attack.

Later on during the battle, glyph mines will appear on two select spots at a time. If possible, jump to a non-flashing area to avoid damage. Unfortunately, Aeons will not be able to move around the battlefield and will almost certainly die from these glyph mines.

Try defeating the boss using these tactics as quickly as possible. Move on to the next area and save at the save sphere. It’s also a good idea to equip armor that protects against status effects like Zombie, Death, Sleep, and either Darkness or Silence depending on which attacks your character uses. Enter the door up ahead to activate a lengthy cut scene. A second cut scene will play after. Before going into the room up the stairs, save at the save sphere again so you don’t have to hear those cut scenes if you fail at the upcoming boss battle. 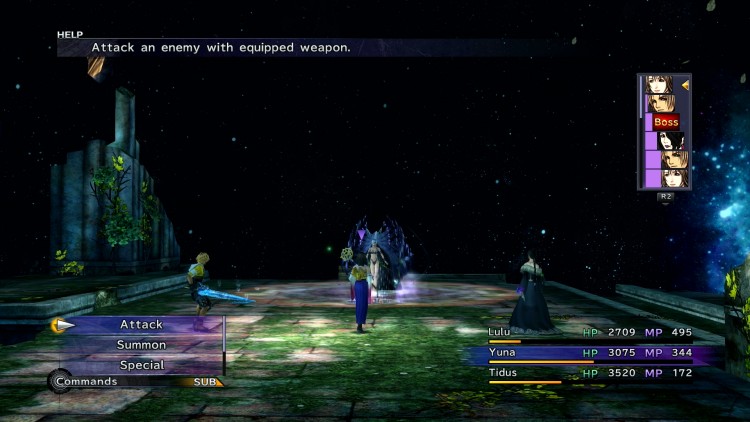 Lady Yunalesca has three forms that you must defeat in succession. The first form will inflict darkness as a counter attack to physical attacks, silence as a counter attack to magic attacks, and sleep as a counter to special moves. Hopefully you have some decent armor equipped that will block these effects. If not, keep Yuna’s Esuna ready. Additionally, she will drain HP from one character and restore her own health.

Cast Hastega to get more turns in battle. This will also prepare you for her second form. Yunalesca will use a new attack called Hellbiter. This attack will slightly injure all three party members and may inflict the Zombie status effect. Yunalesca will then use healing spells like Cura and Curaga to inflict damage on the Zombie-fied party member. Use Holy Water or Remedy to heal the condition at the early part of the second form, but you’ll want to keep it on a number of party members before Yunalesca shifts to her final form. If you can deal damage quickly enough, you can leave the Zombie condition on from the beginning. 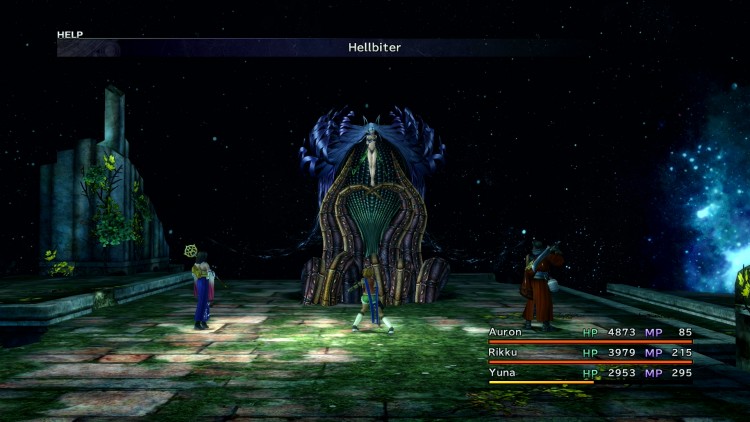 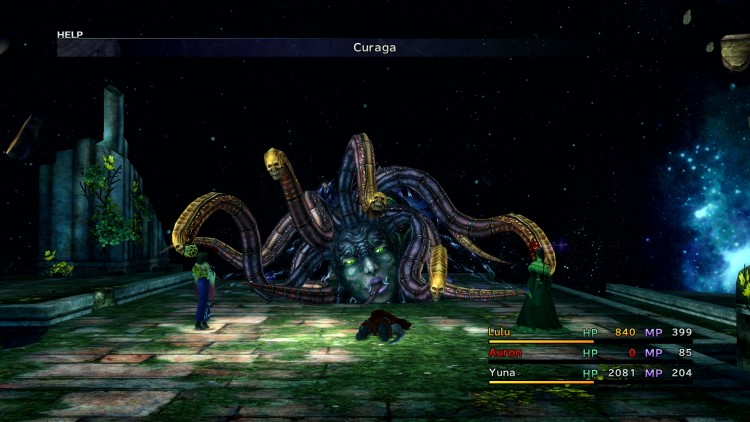 As the battle continues, Yunalesca will begin using a counterattack every time she is attacked. The counterattack is a simple and weak physical attack to the last party member who attacked her. Finally, Yunalesca will use Mind Blast. Like Hellbiter, Mind Blast causes a small bit of damage to all three party members, but instead of inflicting Zombie this attack may inflict Confusion. Try to heal the condition quickly with Esuna or a Remedy or things can get messy.

Defeat Yunalesca as fast as possible so you don’t have to worry about healing with the Zombie status effect. You will earn the Overcoming the Past trophy at the end of the battle. Go down the stairs to the north, then return up the stairs to find a treasure chest containing the Sun Crest celestial item.

Take the stairs to the south to return to the hall before Yunalesca’s room. Walk down and speak to Auron to learn some more back story.

Exit out of Zanarkand’s dome to reunite with Sid aboard his Airship.