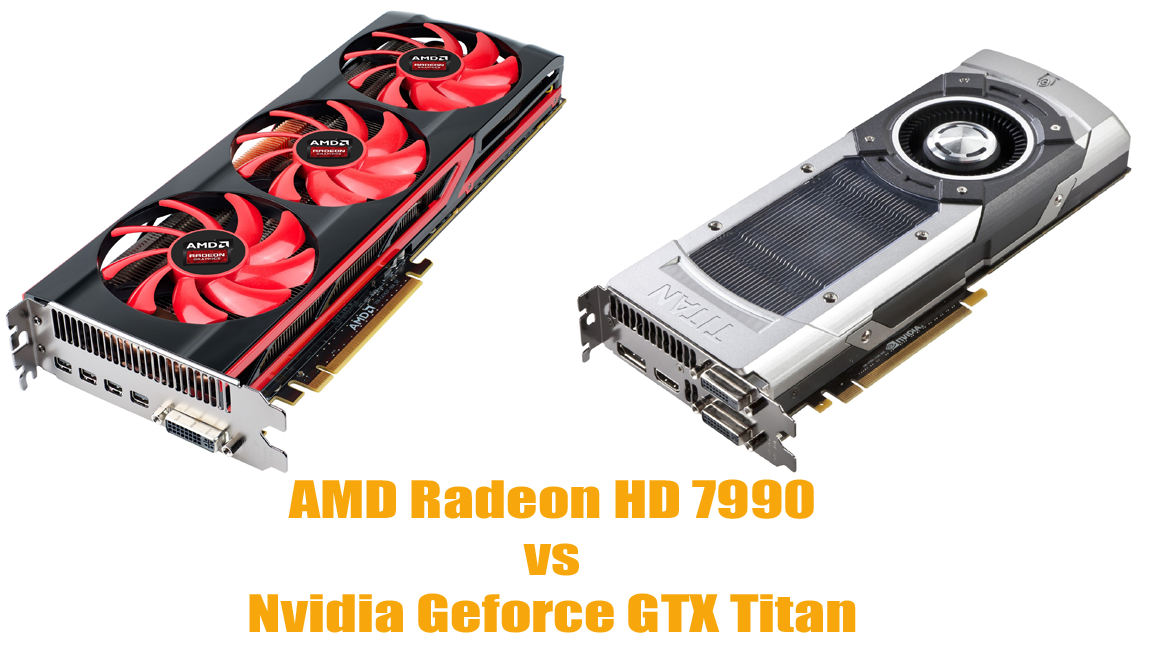 I wanted to get the best GPU out there for my gaming computer when I hit a wall between these two behemoths.

When I first started building my PC I went with the Nvidia Geforce GTX 670 4GB. It was a great card, especially for the price. A lot of people claimed it could run all games at max settings on my 1080p HDTV, but that wasn’t always the case. There were a few heavy duty PC games that didn’t allow a few things here or there to be turned on or turned up to max, but it was a great card nonetheless. As some of you may have seen in another post at this blog, and on my YouTube channel, I decided to upgrade a few things further before putting my wallet away. I decided to upgrade my GPU to something top of the line to “future proof” my gaming PC for a few years. I wanted to prepare for the next generation of games, and maybe even buy a 4K TV in the future. My two decisions were the AMD Radeon HD 7990 or the Nvidia Geforce GTX Titan.

I had to do a little digging between my two choices before buying one of these $1000 cards…or bricks is more like it; though people usually say bricks when some piece of technology fails. Anyways, AMD claimed their GPU was the fastest in the world, and many benchmarks backed it up. Various sources said the 7990 beat the Titan in every category except two. Apparently the Titan was quieter and used less power than the 7990, but that could be because the 7990 had two GPUs in one card, while the Titan only had one. The 7990 also had three fans while the Titan only had one.

One of the decisions to consider before making a choice between the two GPUs is a little something called PhysX. For those that don’t know, PhysX is a sort of program that Nvidia’s GPUs run. AMD’s GPUs cannot run them, but it is possible to get your CPU to run them if it’s good enough. This program adds a few little extra things in video games like sparks, fog, small scale destruction, etc. However, only a small number of games actually have PhysX. You can see a full list of games that use PhysX in THIS LIST from Wikipedia. Of all the games in that list, I currently own four: Metro 2033, Metro Last Light, Mirror’s Edge, and Batman Arkham Asylum. You can see an example of PhysX on and off in several videos around YouTube. One great example is in the video below.

What was AMD’s response to this? Well, recently they tried to make their own unique program called TressFX. This adds realistic qualities to hair…. It’s featured in the new Tomb Raider reboot. If you asked me, it was a pretty poor attempt. Yes, it does look sort of cool, but it’s not nearly enough when competing against PhysX. What happens when you play first person games? You can see an example of TressFX in the video below.

Another big factor was the price point, of course! AMD’s 7990 usually had the lower prices, as low as $899. The lowest price for the Titan I had seen was $1069. On top of that, AMD was offering eight free games when you purchased a 7990! After a long, tough decision, I went with the AMD Radeon HD 7990. You can see me do an unboxing in the video below.

When I got it unboxed and into my PC, I had many issues with it. I realized all of it was user error, so I got it all fixed up and ready to go. Unfortunately, all my problems didn’t go away once this bad boy was working at 100%. The first problem didn’t have anything to do with the GPU. The code for my eight free games was invalid! I contacted customer service to get a new code, and about a week later I’m still waiting for a new code. The real problems with the GPU itself seems to have been documented a small bit on the net, but not much since many people haven’t purchased these. I have experienced a few artifacts while playing Battlefield 3, similar to some artifacts I had seen on my Xbox 360 when playing Bad Company 2. Another huge problem was the frame rate drop and stutter when playing BF3 and Skyrim. So this world’s fastest and advanced GPU has trouble playing two year old games on a 1080p screen? COME ON! Supposedly they’re supposed to fix the frame rate problem with a driver update at the end of the month, but I also hear they’re discontinuing the entire product in two months. Will they continue to make drivers?

Another problem I experienced is something called coil whine. I wasn’t familiar with this until doing a little reading. The GPU makes this small electric-like sound when playing high-end games. I guess it’s due to the massive amount of electricity it has to take in and convert quickly. It’s not too loud, but can get annoying after awhile. My TV also sort of flickers from time to time. I’m not sure if that’s the TV itself, the cable, or the GPU, but it’s a little unusual, and hadn’t happened before.

I’ve only had this GPU for about a week, and I’m seriously considering getting a refund and buying a GTX Titan. Unfortunately, I’ll have to buy the Titan before I can get a refund since I can’t get an instant refund from Amazon, and I can’t be left without a GPU on my PC. The motherboard doesn’t have dedicated video, which means the PC wouldn’t be able to output any signal without a GPU. I’m having a little trouble with my Bill Me Later account, and I have no other credit cards with a $1100+ credit limit. I’m currently rectifying it, and I hope to buy a GTX Titan by the end of the week. Keep your fingers crossed! I haven’t heard of any problems with the Titan other than some possible coil whine. I think any other problems have been ironed out with driver updates over the past few months.

My final worry is the future of gaming. Supposedly a lot of games are going to be built on AMD graphics in the upcoming generation. Perhaps I’ll have to change to a newer AMD GPU in the future? I really hope not. I may write an update to this blog once I have the GTX Titan in my hands! Actually, I’ll probably just write another blog entirely and another unboxing video. Keep an eye out for either. And don’t forget to write me a comment. I always love having conversations about any topic I wrote.