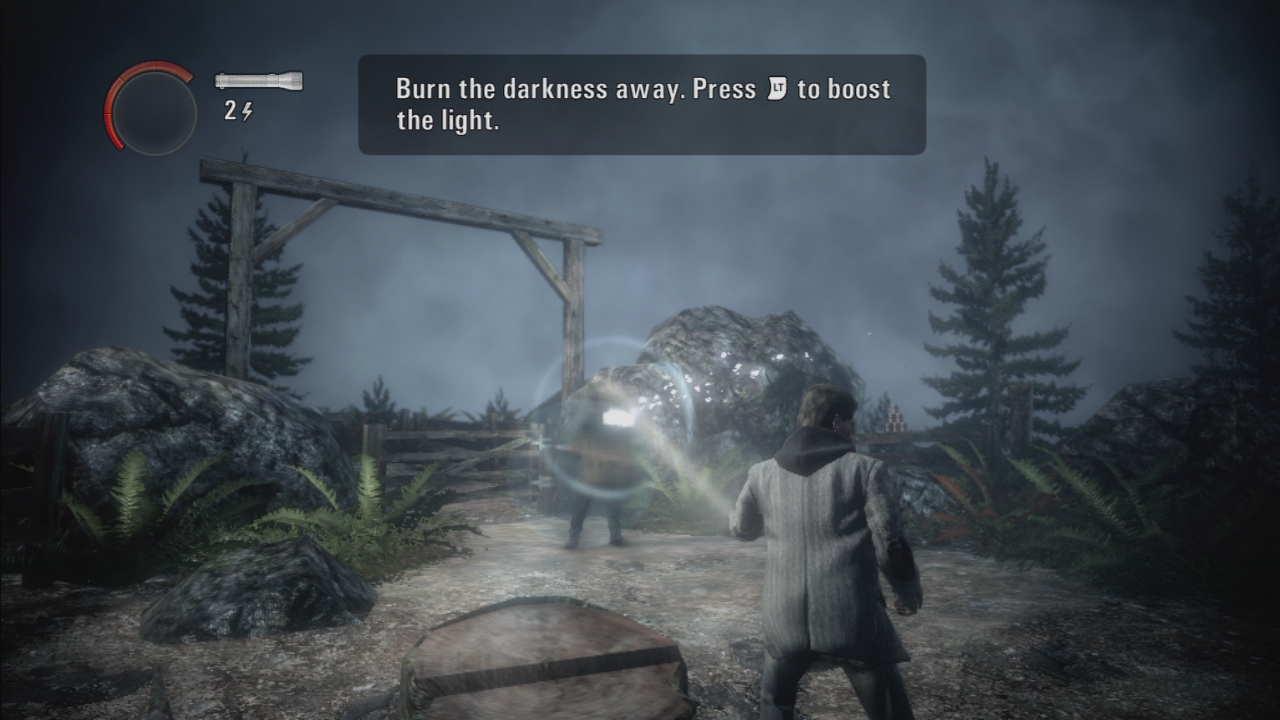 In this section I will tell you the basic set up of the game and how to play it.

You can fall of cliffs and you can’t touch water in the big lakes or you’ll die.
You can run for about 10 seconds before you get tired.
You can only drive cars with the lights turned on in the inside.
The cars you drive can get damaged, and if they’re damaged enough you’ll have to leave it.

Your health is not regenerative at all time and lowers when being attacked by an enemy just like in any other game. Your health is separated into 4 bars in a half circle around your compass. Once it reaches the last segment then you’ll hear a heartbeat and the screen will turn black and white.

To regenerate your health you either stop getting attacked and your health will come back slowly, around 88 seconds for full health, or you must get to Safe Havens in light sources such as street lights and you’ll most likely get a checkpoint and full health.

Sometimes there will be generators next to light sources that aren’t lit up just yet. You can recognize these by flashing green bulbs. To start the generators get close to them, press B and a wheel will appear, then you must press A each time the indicator in the wheel reaches a green zone. A few times should do it and your light source will be available.

Alan Wake is a game where you have to face enemies in the dark. They are invincible unless you have some sort of light source like your flashlight or torch on them. This takes away their shield of darkness basically. You can tell how much darkness shield they have by the size of the circle around the light beam and sparks flying off the enemy. 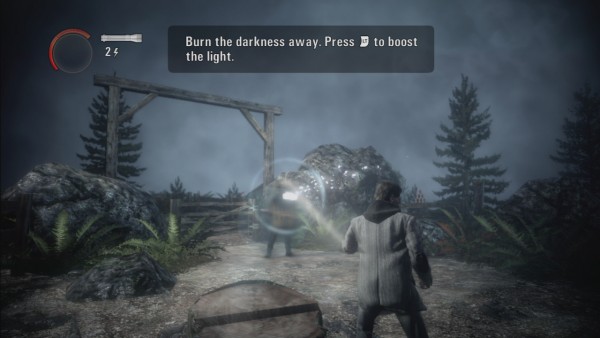 Once the shield is gone a bright flash will appear, now they’re vulnerable! Once they’re vulnerable you can use regular weapons and kill them. You can also boost light sources to take down their shields faster and stun/blind the enemy for that time. However, the battery power is used up faster.

Most Enemies fall under four categories:

The human like enemies of Alan Wake are called the “Taken.” They were once humans that are now possessed by a “Dark Presence.” Taken have a shield of darkness that protects them from injury. Use some type of light to take away this shield and then you can kill them with normal weapons.

There are different sizes of Taken:

Regular Taken: Just regular people that use axes for melee and pick axes for throwing. On Normal they can take about two shots from a revolver after their shield is down.

Strong Taken: The strong taken are usually bigger than most taken by a bit and carry sledgehammers that hurt you real bad. With the addition of using a sledgehammer they can charge at you like a bull to do some damage. They have bigger shields than the other taken and can take more damage. About 4 times more damage I’d say.

Boss Taken: These can vary with size and speed. They’re usually both strong and fast and some can teleport across the screen. They all have high shields and even higher damage resistance, by about 9 or 10 times.

Ravens aren’t very strong by themselves, but once they’re in flocks they can destroy you. They are very hard to hit with regular weapons so it’s best to kill them with boosted light or a flare gun.

Even objects can be enemies in Alan Wake. Various objects like barrels and gates and other scenery can be possessed by the darkness and fly at you to injure or even kill you. To destroy them you need to use a light source. If you don’t destroy them the first time they fly at you then they’ll come back again and again. If they’re within a certain range of you using a flare then they’ll stop moving until the flare ends.

Hardly an enemy but it can hurt you! You’ll find black goo all over and if you touch it then it damages you. Just keep your light on them and they die quickly without moving.

There are a few items in Alan Wake. After each story section in the game you will lose all your items you obtained, so don’t stock up just use them.

When reloading you have to manually reload every time. There is no automatic reload unless you count tapping the fire button over and over until it reloads. Tap x to reload and keep tapping it to reload faster.

Needed to take out any enemies in Alan Wake. Light Sources come in various items and intensity/power. Boosting the light source with LT stuns an enemy so they can’t attack you, it also takes down their darkness shield faster.
Flashlight – Basic Flashlight that lights your path. 6 seconds of light boosted. 16.3 seconds for the flashlight to fully recharge on it’s own. Takes two batteries to recharge it.