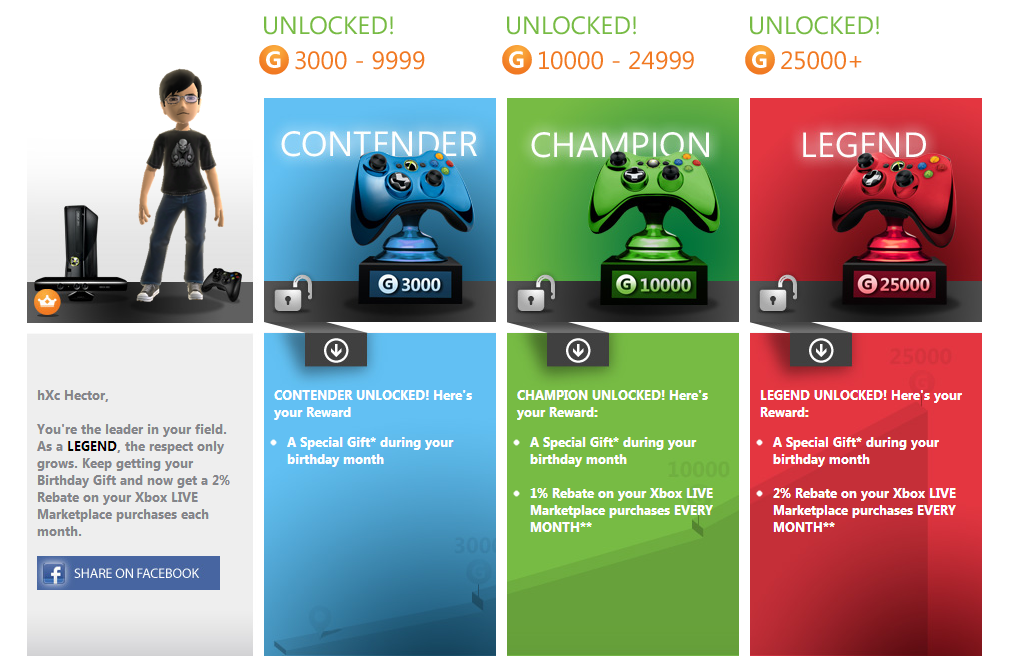 I heard about this system a few months ago around April Fools Day. I thought it was a joke, but many people said it was legit. Today, Xbox announced “My Achievements.” If you haven’t been to Xbox LIVE Rewards yet, do it now! You can get “free” Microsoft points in a variety of ways. Sometimes it’s rebate type stuff like spending Microsoft Points or renewing your Xbox Live, and sometimes you only have to take a survey! I’ve been doing it for a while, and I’ve racked up quite a few MSP.

These three levels are:

As you can see in the image above, I’m already a Legend. Unlock one of the spots to get a “Special Gift” during your birthday. Unfortunately, my birthday was in August, so I’m going to have to wait another year to see what that’s all about. If anyone knows, please comment below. The other two levels give you a very small percentage rebate off of Xbox LIVE Marketplace purchases every month. I really hope that doesn’t mean one purchase each month.

Now I know I shouldn’t complain, but 1 and 2% rebates are extremely small, and their marketplace items aren’t exactly cheap or ever on sale like Steam. Plus they require us to pay to play online! You think they could have given us something better. Maybe they should make more levels. I’m already way above the Legend Level. You can see my gamercard at the bottom right corner of my blog. What are your thoughts on this new system?