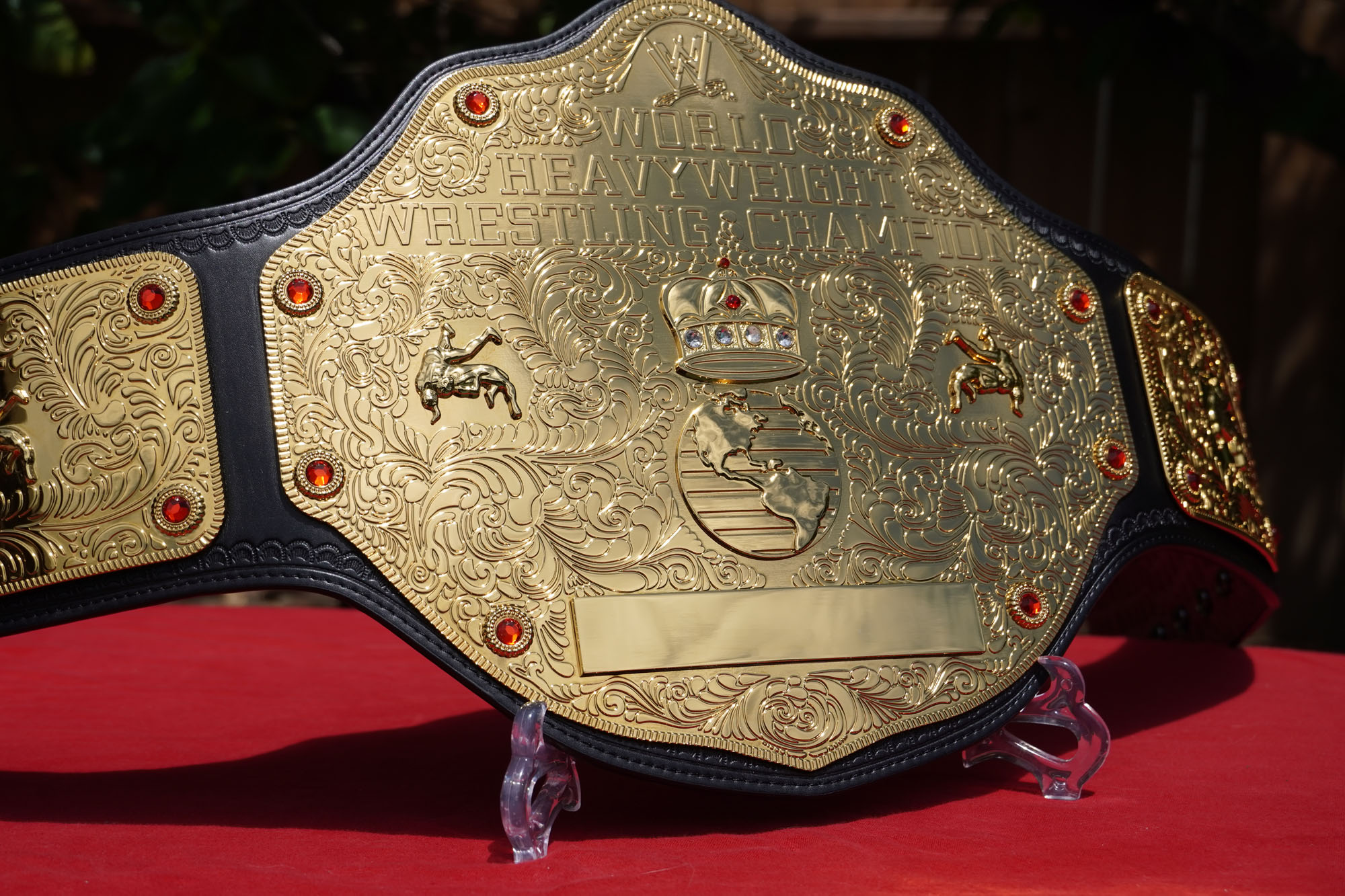 Complete with a tooled red croc strap, this WWE World Heavyweight Championship replica is 2mm thick and still sold on the WWE shop with false pictures! See how it really looks here.

The World Heavyweight Championship underwent a series of changes over the 11 years it was used in World Wrestling Entertainment. This replica is modeled off the final version of the big gold before it was unified with the WWE championship in 2013. The stones were increased in size compared to the original WCW Championship, the floral etching was widened, the strap was completely changed, one of the wrestler fixtures on the main plate was mirrored, and the WWE logo was added, among other changes.

As mentioned earlier, this replica is still available on the WWE Shop, but for some reason the product page uses pictures of the replica manufactured by the Figures Toy Company with 4mm thick plates. It is not the exact same design! All pictures in this review are from the WWE Shop’s 2mm World Heavyweight Championship, the one you can still buy in the shop.

The main plate measures 12.6 inches wide by 11.34 inches tall. Unlike the other replicas, the main plate on the 2mm WWE World Heavyweight Championship is made out of stainless steel. I don’t know why this was done, but the big gold feels cheaper and thinner when compared to the other replicas sold in the WWE Shop.

Each side plate measure 5.75 inches wide by 3.98 inches tall. The side plates are made out of the typical zinc alloy similar to the other replicas, which makes you wonder why only the main plate is stainless steel.

All plates are 2mm thick and have a slight curve to them. While the curve is not huge, it does a great deal to make the belt look more TV realistic.

The crown on the main plate has textured squares behind the false diamonds. All jewels on the big gold are cheap plastic rhinestones with zero sparkle or shine, but the rubies do have the proper jewel holder based off the Figures Toy Co version of the replica — unlike the WCW Championship.

The continents on the globe are smooth instead of textured, but they are slightly wavy to mimic the topography. The horizontal lines within the globe seem more like 2D etched lines within the base globe. The globe all together is far more toned down when compared to the original big gold.

At the bottom of the main plate is the nameplate of the WWE World Heavyweight Championship. The nameplate measures 3.75 inches wide by 1 inch tall and is removable and engravable. Pre-engraved nameplates can be purchased from the Wrestling Super Store, the home of Figures Toy Company products, the original maker of WWE championship replicas.

The strap itself is made out of polyurethane. It is a stiff material meant to display the belt as a trophy, not to replicate the flexibility of the leather seen on TV. The front is black with seashell tooling around the edges of the entire belt, and the backside has a light-red croc backing. Measuring 51.7 inches wide by 11.81 inches tall by 0.20 inches thick. The Official WWE Authentic Replica Championship Title patch is sewn onto the red croc backing.

All in all, the WWE World Heavyweight Championship is a great replica by the WWE Shop. While the 4mm version is of higher quality than the 2mm version, they are harder to come by and more expensive. Moreover, the last version of the WWE World Heavyweight Championship shown on TV featured very thin plates, which could be why they continue to sell the 2mm version. Regardless, the 2mm version is still a nice replica to add to your collection, especially since the price often drops below $250!