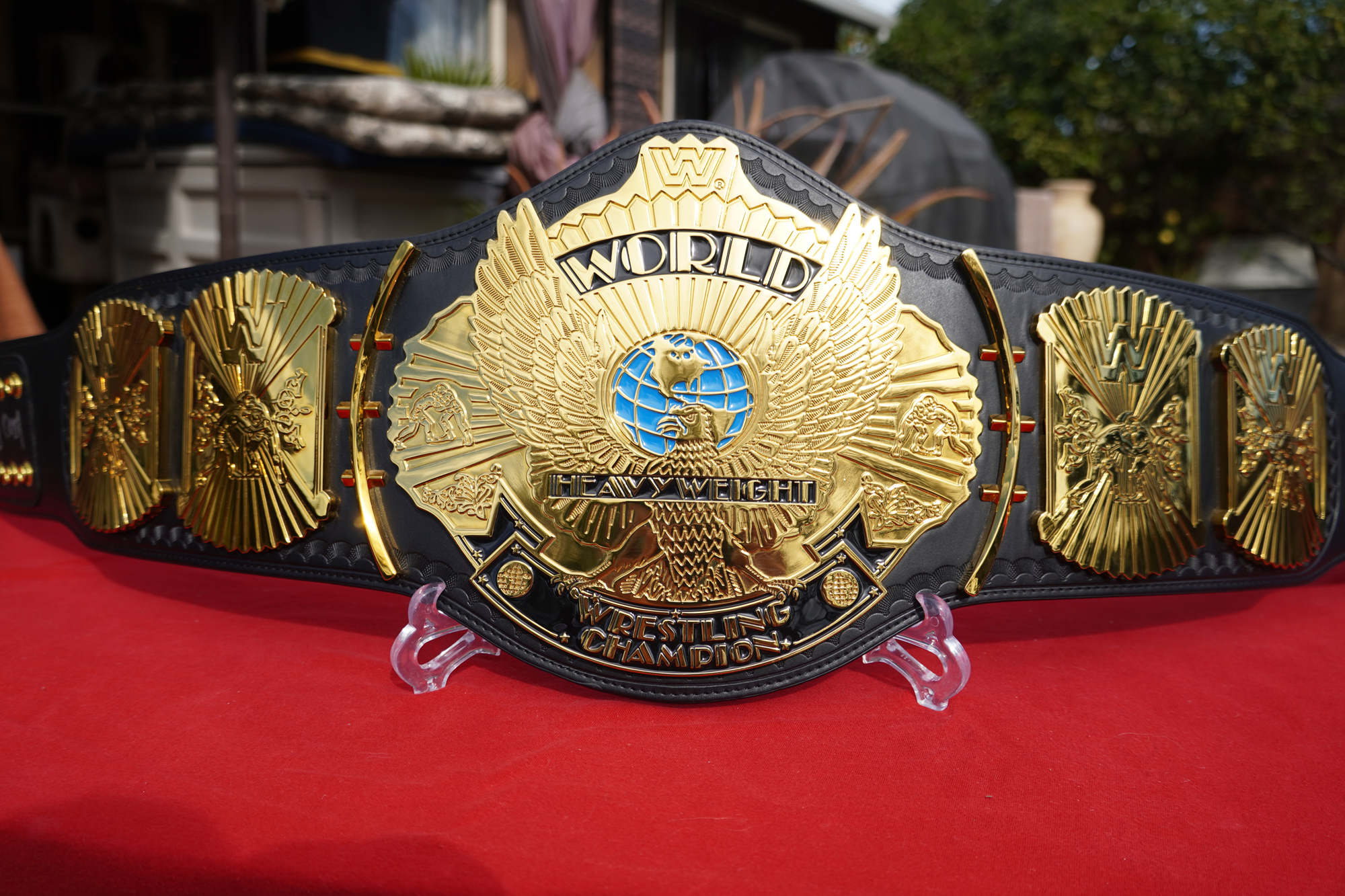 Possibly the most popular WWE Championship ever made, the winged eagle from the WWE Shop is an exact scale replica of the original. See the belt in all its glory here!

This particular winged eagle replica was manufactured and released by the WWE Shop. The classic WWF logo has been replaced with a classic version of the WWE logo, but the rest of the belt remains the same.

This championship replica has deep etching into its thick plates, and most of the design looks just like the real thing. It appears to be the exact same design used from the Figures Toy Company winged eagle replica, which has a beautiful eagle and several globes etched in the main plate, but the wrestlers in the side plates leave much to be desired. Still, I did my best to capture this WWE Championship belt in both overcast and direct sunlight.

The main plate measures 8.94″ x 9.84″ and is almost in the shape of a plus sign. The very top of the main plate features the WWE logo with a tiny R in a circle, which means registered trademark. This is the only logo on all plates that includes a circled R. The points of the W extend out of the plate, giving it the appearance of a crown. Below the logo is the word “WORLD” etched in gold on top of black paint.

In the center of the main plate is a light-blue globe with golden continents. The head of the eagle overlaps with the globe etching, and its wings extend out beyond the word “WORLD” and passed the edges of the main plate. A total of 11 and two halved bars extend upward behind the word “WORLD” but stop before reaching the edge. The word “HEAVYWEIGHT” is etched in gold on black paint on top of the chest of the winged eagle.

The entire bottom curve of the main plate has a black banner with the words “WRESTLING CHAMPION” etched in gold. On the left and right sides of that same black ribbon are two golden globes etched into the plate. There appear to be some sort of continents in the longitude and latitude lines of these globes, but they are not Earth continents. It looks as if random bits of land were added to the globe for one side, and then the design was flipped for the other globe.

To the sides of the main plate are curved and twisted bars that extend from the top to the bottom of the belt. They attach to the strap with three horizontal bars that screw into the back.

The first side plates are exactly the same as one another and measure 5.04″ x 3.5″. They feature two wrestlers grappling in the center of the plate. The WWE logo is etched near the top of the plate, but does not extend outward like the main plate’s logo. A total of 13 points extend out from the wrestlers beyond the edge of the side plate, and 13 more extend out of the bottom. What appear to be leafed etchings pop out of the plates to the left and right of the wrestlers.

All five plates and the two twisted bars are surrounded in a seashell tooling on a black strap. The wings of the eagle extend just passed the seashell tooling, but the WWE logos and crown-like edges of the plates do not go beyond the tooling.

Just before the snap box on the right is a WWE Champion logo plate. The logo plate measures 2.48″ x 2.01″ and appears to be thicker than the other main plates. Maybe this was the plate that measures 0.28 inches as the WWE Shop’s product page mentions.

The ends of the faux leather belt have snap boxes sewn on behind the 5×2 female snaps and 8×2 male snaps. The right-edge of the belt passed the logo plate has a metal tip with the same cheesy gold plating with a mirror finish as all other plates on the belt.

Just like the other WWE Shop replica belts, an official WWE replica patch is sewn onto the back of the belt with an official WWE holographic sticker. The entire belt strap is made out of polyurethane and measures 50″ x 9.84″ x 0.2″. This is a faux leather material that is very stiff. It’s great for displaying belts but do not replicate the floppiness of real leather as seen on TV.

In total, this belt weighs 5.29 lbs., and the largest waist size it can fit is 38″. The WWE Winged Eagle replica from the WWE Shop is a gorgeous belt with magnificent design. The only problems someone might have is the stiff belt, the WWE logo instead of the original WWF logo, and the cheesy gold coloring. Even with these flaws, I highly recommend purchasing this belt if you are an older wrestling fan or collector. Its base price is $399, but the belt often drops below $300! Keep an eye out for sale prices when PPVs roll around.