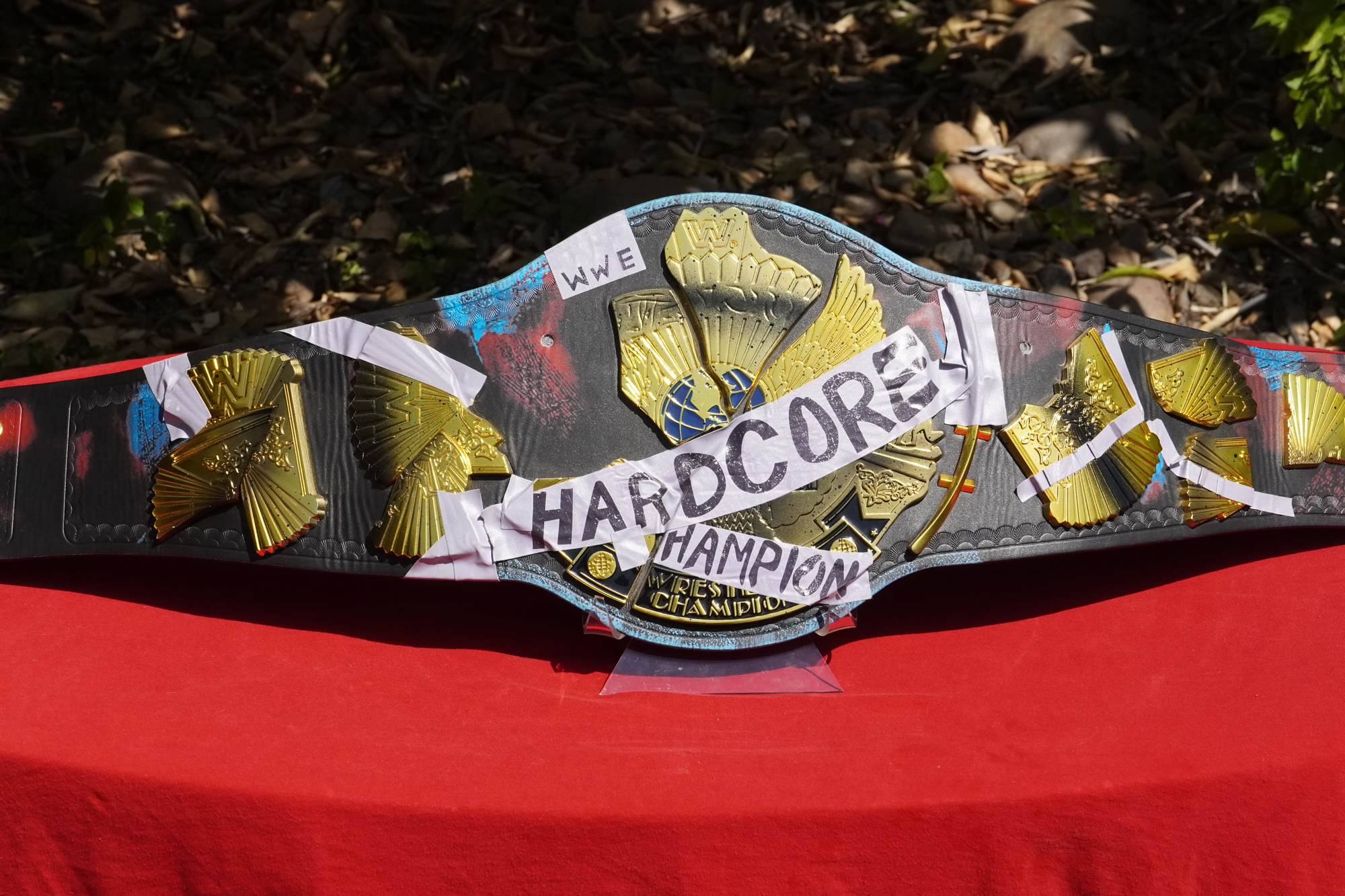 The legendary Hardcore Championship was given this high quality replica by the WWE Shop. Hand assembled, it is said no two titles are the same.

The Hardcore Championship was original introduced as a present from WWF Chairman Vince McMahon to Mankind (Mick Foley) on the November 2, 1998 episode of Raw. All matches were under Hardcore rules, meaning no disqualifications, no count outs, and pin falls and submissions count anywhere. Later on, Hardcore Champion Crash Holly added the 24/7 stipulation, meaning as long as their was a WWF referee present, anyone could challenge for the Hardcore Championship any place and any time.

The design of the Hardcore Championship was originally based off of the WWF Championship Winged Eagle design. All plates were smashed and reassembled on a leather strap with duct tape. The words HARDCORE CHAMPION were written in black sharpie on the duct tape, but the C on CHAMPION was cut off. The words WORLD WRESTLING FEDERATION were sanded down and painted black just below the top of the main plate. And various colors were spray painted on the strap. This replica was based off of that original version of the Hardcore Championship before it became even more smashed and reassembled over the years. However, all WWF logos have been changed to WWE logos.

All plates are zinc alloy coated with gold coloring. Unlike most other replicas, these plates are more of a matte metal with black spray paint instead of having a mirror shine. Each plate has a smashed design, and the side plates overlap with each other. The WWE Shop has provided measurements for all the plates, even though they are unusually shaped.

Like the other WWE Shop plates, these plates are completely flat. While some side plates overlap, they can still lift up a tiny bit.

The duct tape appears to be simulated duct tape with printed words. This is probably a good thing since the tape on older replicas came off the strap, or the words that were written on the tape had rubbed off.

The WWE Shop’s page says the championship is hand assembled and no two belts are the same. It is most likely due to the duct tape that is added on since the plates are always the same and screwed onto the same exact parts of the strap.

The strap is made out of polyurethane and measures approximately 49.5″ x 9.75″. Although the outside of the belt is soft, it will stay rigid to allow collectors to display the belt like a trophy. Leave it in the sun or heat it up to get it to become more flexible. This replica has red and blue coloring spray painted around the strap.

This WWE Hardcore Championship replica from the WWE Shop is a great, high-quality replica, especially for a title belt that is supposed to look destroyed while kept intact. While it looks a bit cheap in comparison to other replicas, since the plates are matte and is listed as zinc alloy plated, but the design is still excellent and would be a great addition to any wrestling fan’s collection.