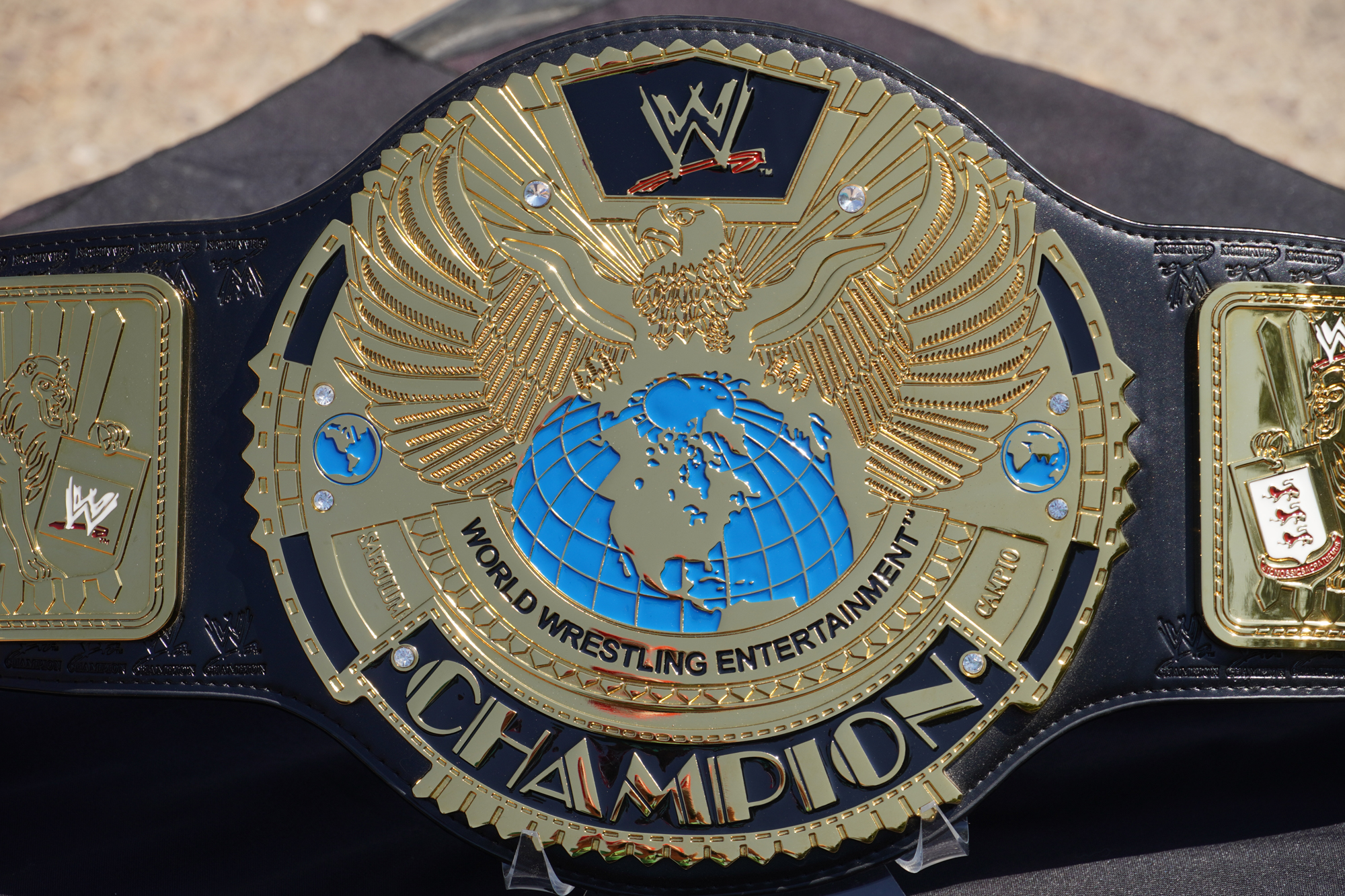 The WWE Championship has undergone numerous changes over the years, but one of the most memorable iterations is the championship featured during the attitude era, also known as the Big Eagle.

In the late 90s, the attitude era hit WWE, then known as the WWF. The world heavyweight championship was held by greats such as Stone Cold Steve Austin, The Rock, Triple H, Mick Foley, Kurt Angle, Undertaker, Kane, The Big Show, and more!

Unfortunately, the WWE has not been able to sell the WWF logo on merchandise for some time. That means the Big Eagle championship had to receive some slight alterations before the replica could be sold. All WWF scratch logos were turned into WWE scratch logos, and the words “World Wrestling Federation” were replaced with “World Wrestling Entertainment” underneath the globe.

The strap itself is made out of polyurethane. It is a stiff material meant to display the belt as a trophy, not to replicate the flexibility of the leather seen on TV. The belt strap measures 53.4 inches wide by 11.1 inches tall by 0.25 inches thick, and has a WWE Champion tooling around the edges. An Official WWE Authentic Replica Championship Title patch is stitched onto the back of the belt.

For some reason, the replica still isn’t the same as the version used on TV. The side plates are simplistic and smooth while the real thing had a textured background behind most of the WWF scratch logos. The smooth side plates were also on the WWF replica from the figures toy company, and were never fixed. Another weird choice was the fact that the side plates were a bit thicker than the main plate.

The gold plating is a very cheesy gold as often seen from the WWE Shop, and as always with WWE shop replicas, this attitude era championship is incredibly flat. The real big eagle championship seen on TV seemed to have a massive curve.

But by far the biggest error is the fact that the west side of Canada is etched horribly. It’s as if they filled in the entire quadrant of the globe between the longitude and latitude lines.

The entire championship belt as a whole weighs 7.05 lbs. or 3200g. As a huge fan of the big eagle championship, and someone who became a regular viewer during the attitude era, it’s hard to recommend this replica to fans out there. The change from WWF to WWE is one thing, but the fact that the replica is so flat and doesn’t have all the detail it deserves is saddening.

The real upgrades from the WWF big eagle from the Figures Toy Company are the thicker plates, the deeper etching, and the bigger WWE Champion tooling around the belt. This replica is still available from the WWE Shop for around $300.