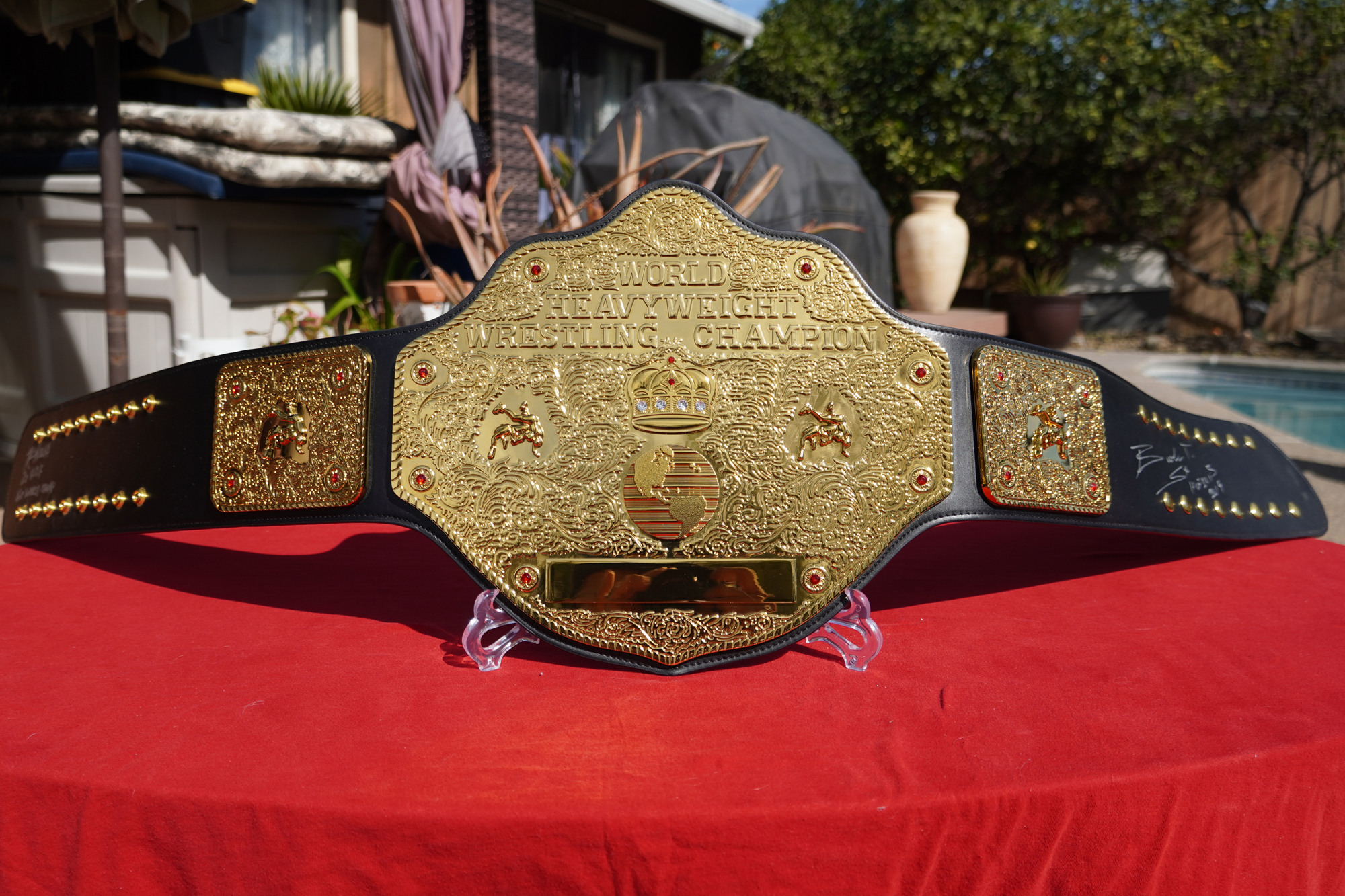 The WCW World Heavyweight Championship has had numerous replicas from different collectible companies. This version is officially licensed by the WWE and sold in the WWE Shop. See how this replica stacks up!

Also known as the Big Gold, the WCW World Heavyweight Championship features a massive gold main plate on a very simplistic black strap. The plates are made out of zinc alloy and shine with a mirror finish.

The main plate measures 13.4 inches wide by 11.7 inches tall. All plates are 5mm thick and have deep 2D etching. Unfortunately, the etching stops at the edge of the plates and does not go over.

Several pieces are affixed to the main plate and two side plates. It appears as if the crown, globe, and wrestlers are all glued to the plates because there was dried glue or something coming out of these pieces.

However, when I took the plate off the strap, I could see all the extra pieces were screwed into the main plate of the WCW Championship.

Both the red rubies and clear diamond jewels throughout the WCW Championship are made of plastic and have no shimmer or shine to them. The etching behind the jewels within the crown have the same standard design as the original WCW Championship, with lines to make it appear as if the jewels were shining outward into the gold.

The eight rubies around the edges of the main plate are slightly larger than the rubies in the crown, but the gold etching around these rubies are ugly and do not look like any big gold replica I have ever seen. They offer no support and look as if the makers created a 2D etching of what the jewel holders might have looked like.

A beautiful piece of the WCW championship is the globe near the center of the plate. This globe features textured continents and several lines deeply etched into the metal. There are eight thick lines from the top to the bottom of the globe, and three thin lines between each set of thicker lines.

At the bottom of the main plate is the nameplate of the WCW World Heavyweight Championship. The nameplate measures 3.75 inches wide by 1 inch tall and is removable and engravable. Pre-engraved nameplates can be purchased from the Wrestling Super Store, the home of Figures Toy Company products, the original maker of WWE championship replicas.

Both side plates measure 5.2 inches wide by 4 inches tall. Just like the main plate, they are 5mm thick, feature the same wrestler pieces, and four plastic rubies on the four corners.

The strap itself is made out of polyurethane. It is a stiff material meant to display the belt as a trophy, not to replicate the flexibility of the leather seen on TV. This basic black belt strap measures 55.3 inches wide by 12.2 inches tall by 0.25 inches thick. The Official WWE Authentic Replica Championship Title patch is sewn onto the back of the strap, just like all other official replicas.

Just like most of the other replicas from the WWE Shop, the WCW World Heavyweight Championship replica is completely flat and is painted a very cheesy gold color.

See my detailed video review of the WCW World Heavyweight Championship replica by the WWE Shop below.

The flat main plate and terrible ruby holders make it a little tough to recommend this particular big gold replica, especially since there are so many replicas of the WHC out there. Most people love this replica because it’s officially licensed by the WWE, owners of the now defunct WCW. The thick plates and deep etching are another reason why people like this particular replica. The WWE shop sells this replica for $400 at most, but can go on sale for less than $300!