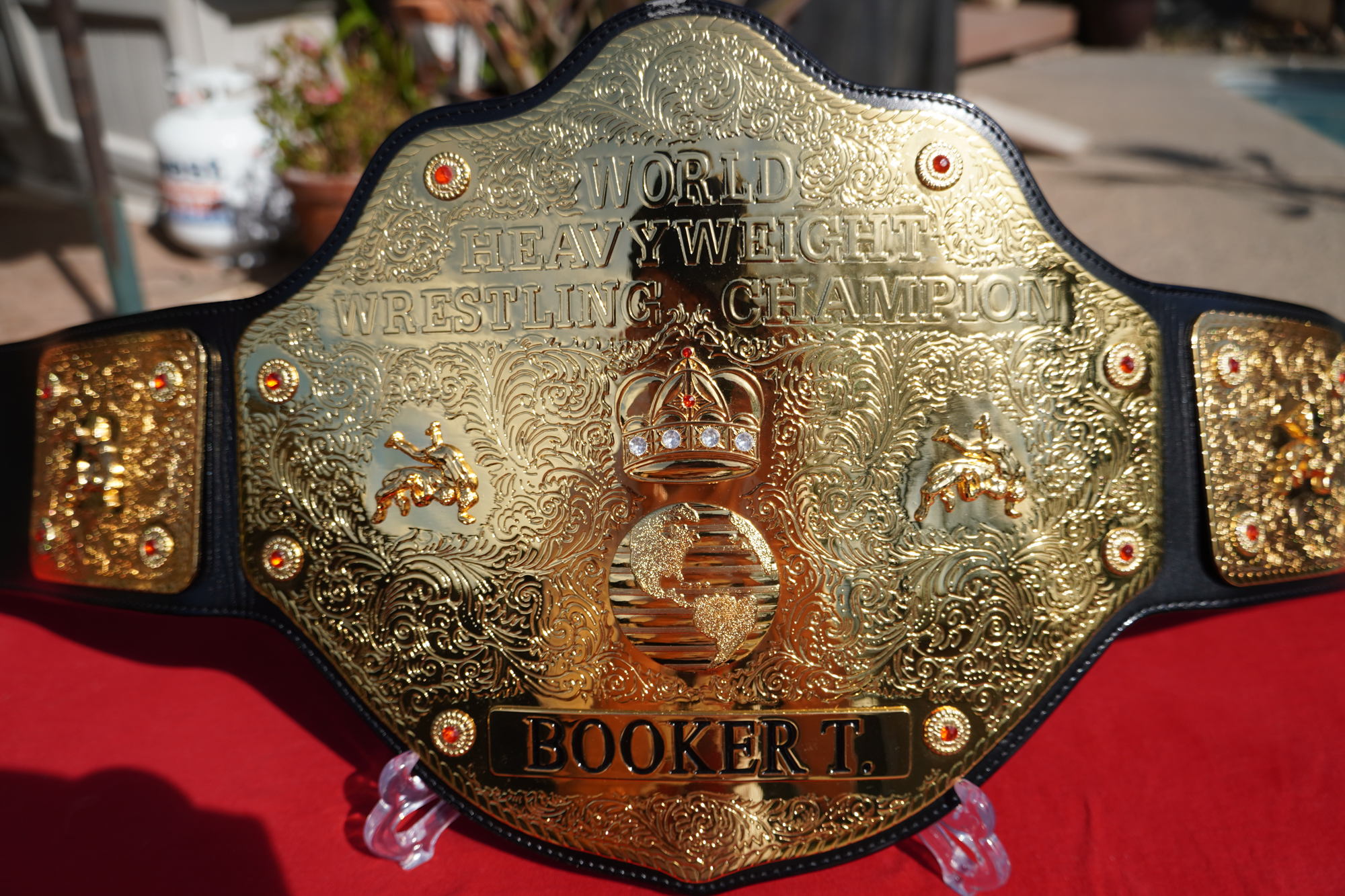 The WCW World Heavyweight Championship, also known as Big Gold, received this 2mm replica from the Figures Toy Company in the early 2000s.

The Big Gold is considered one of the greatest championship belt designs by collectors and wrestling fans alike. This particular replica was licensed by the WWE in 2003 after the company had purchased the WCW, and was manufactured by the Figures Toy Company.

The three plates have a light gold mirror finish and are all 2mm thick. The leafed etching throughout the plates is standard for these 2mm plates, but compared to the newer replicas from the WWE Shop these older Figs Inc replicas are half as thick.

Regardless, the Figures Toy Co WCW Championship has even better detail than the WWE Shop release! All three of my plates seem to have a curve, but all other WCW Championship replicas I’ve seen have been completely flat.

The crown relief piece is below the WORLD HEAVYWEIGHT WRESTLING CHAMPION etching. It features four faux diamonds and two faux rubies. Behind the faux diamonds are etchings that make it look as if the diamonds are shining into the gold.

The globe relief piece is below the crown. Just like the original, it doesn’t extend out too much from the main plate, but there is still texturing on the continents and etched latitude lines.

A removable nameplate is attached to the bottom of the main plate by two screws. Additional blank or etched nameplates can be purchased from the Wrestling Super Store, home of the Figures Toy Company. Unfortunately, the company no longer sells replacement jewels for the WCW Championship. While they still sell replacement jewels for the WWE World Heavyweight Championship, the size and detail is not the same.

All four sets of wrestlers throughout the three plates show incredible detail in their etching. There is texture for their hair, singlets can be made out, and even their hands have detailed fingers.

Like all other standard replicas, the strap of this WCW Championship replica is made out of polyurethane. It keeps the belt stiff and upright while on display, but still has a small amount of flex to it. Manufacturing and licensing information is imprinted on a patch which is sewn onto the back of the strap. The strap itself is approximately 54 inches long and connects together with 8×2 male snaps and 8×2 female snaps.

Again, while the WWE Shop has released a newer replica of the WCW World Heavyweight Championship with thicker plates and deeper etching, the detail does not compare to the WCW Championship replicas by the Figures Toy Company. All the relief pieces are so much more detailed, and the replica itself is still high quality. Fans and collectors might have to make the tough decision on which to purchase.