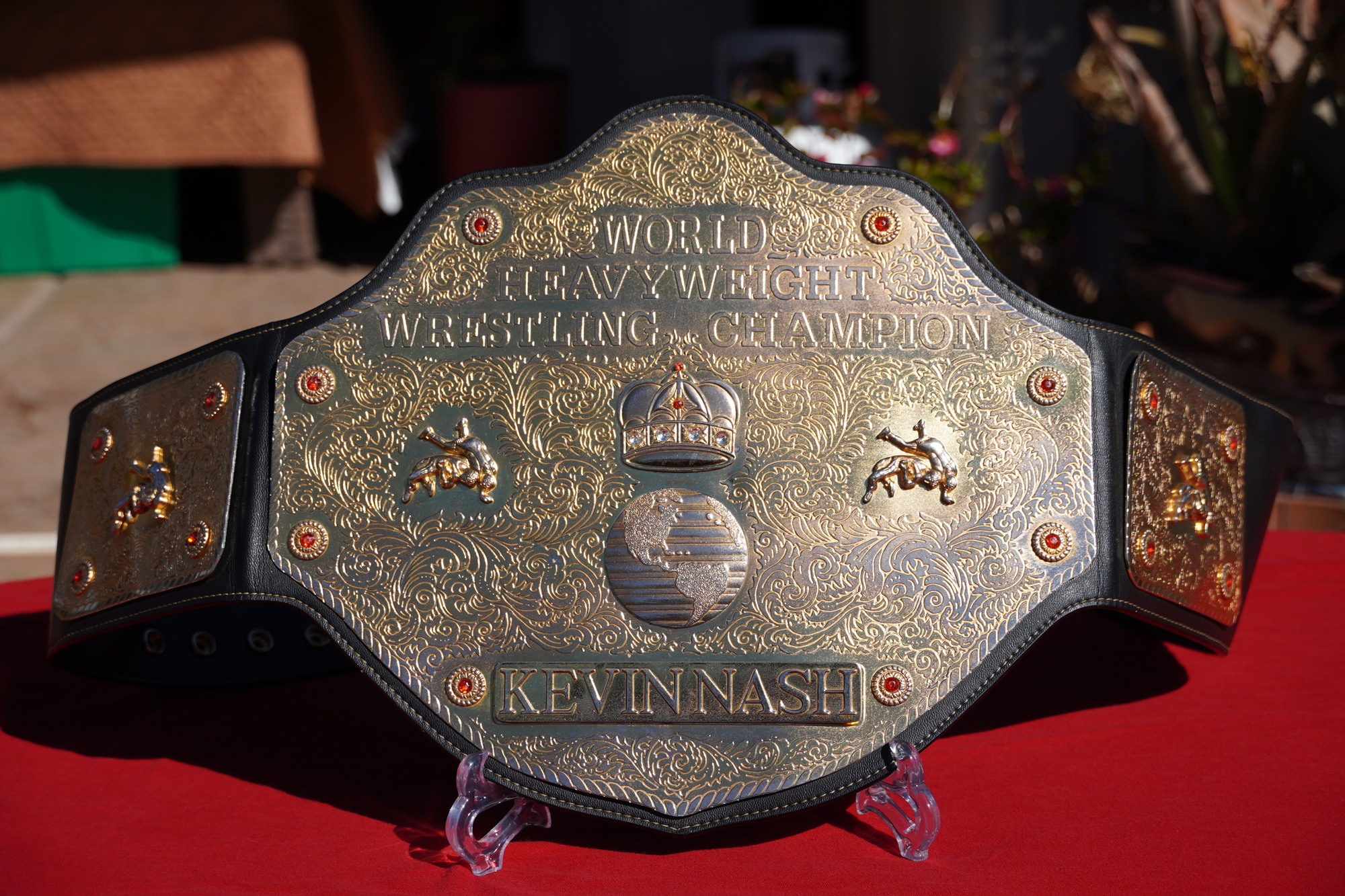 The first replica licensed by WCW back in 1998! This WCW World Heavyweight Championship by the Figures Toy Company has seen better days but still has incredible detail.

The WCW World Heavyweight Championship, also known as Big Gold, is considered one of the greatest championship belt designs by collectors and wrestling fans alike. World Championship Wrestling licensed this replica for the Figures Toy Company to manufacture in the late 1990s.

As one of the first replicas, it is on the cheaper and thinner side. While the plates on my replica have begun to tarnish, the original release had a light gold mirror finish like the replicas you see from the Figures Toy Company today.

The plates are only 1mm thick, meaning the etching is incredibly shallow. This includes the words WORLD HEAVYWEIGHT WRESTLING CHAMPION at the top of the main plate.

Luckily, the crown, globe, and wrestlers are separate relief pieces that were attached to the main plate somehow. I was able to see a bit of a gap between my globe and main plate, and it appeared to be green beneath the relief piece.

The crown relief piece is below the WORLD HEAVYWEIGHT WRESTLING CHAMPION etching. It features four faux diamonds and two faux rubies. Behind the faux diamonds are etchings that make it look as if the diamonds are shining into the gold.

The globe relief piece is below the crown. Just like the original, it doesn’t extend out too much from the main plate, but there is still texturing on the continents and etched latitude lines.

There is incredible detail in the four sets of wrestlers throughout the three plates. You can make out the texture of their hair, their singlets, and even the fingers in their hands!

Sixteen faux rubies throughout the three plates also have incredible detail etched into them. These pieces are not etched into the plates, but instead attached to the main plate by bolts like the other relief pieces.

The strap is made out of PVC faux leather with a thin stitching around the edges. There are 8×2 male snaps and 8×2 female snaps, which are on switched sides when compared to all other WCW Championship replicas released down the road. The Figures Toy Company sold this belt by saying it was the same thickness as the original championship.

All the licensing and manufacturing information is imprinted on the back of the strap. The back side of the belt also shows the studs where the plates are attached to the strap. Unlike later replicas, these plates cannot be unscrewed from the strap and screwed-in again. Only the nameplate on the bottom-center of the main plate can be unscrewed from the belt.

While this replica is awesome to have for hardcore collectors who want original pieces in their collection, there have been later releases of the WCW World Heavyweight Championship by the Figures Toy Company that are thicker and of higher quality than this replica. I would recommend finding and buying the later replicas licensed by the WWE if you want a detailed Big Gold in your collection.