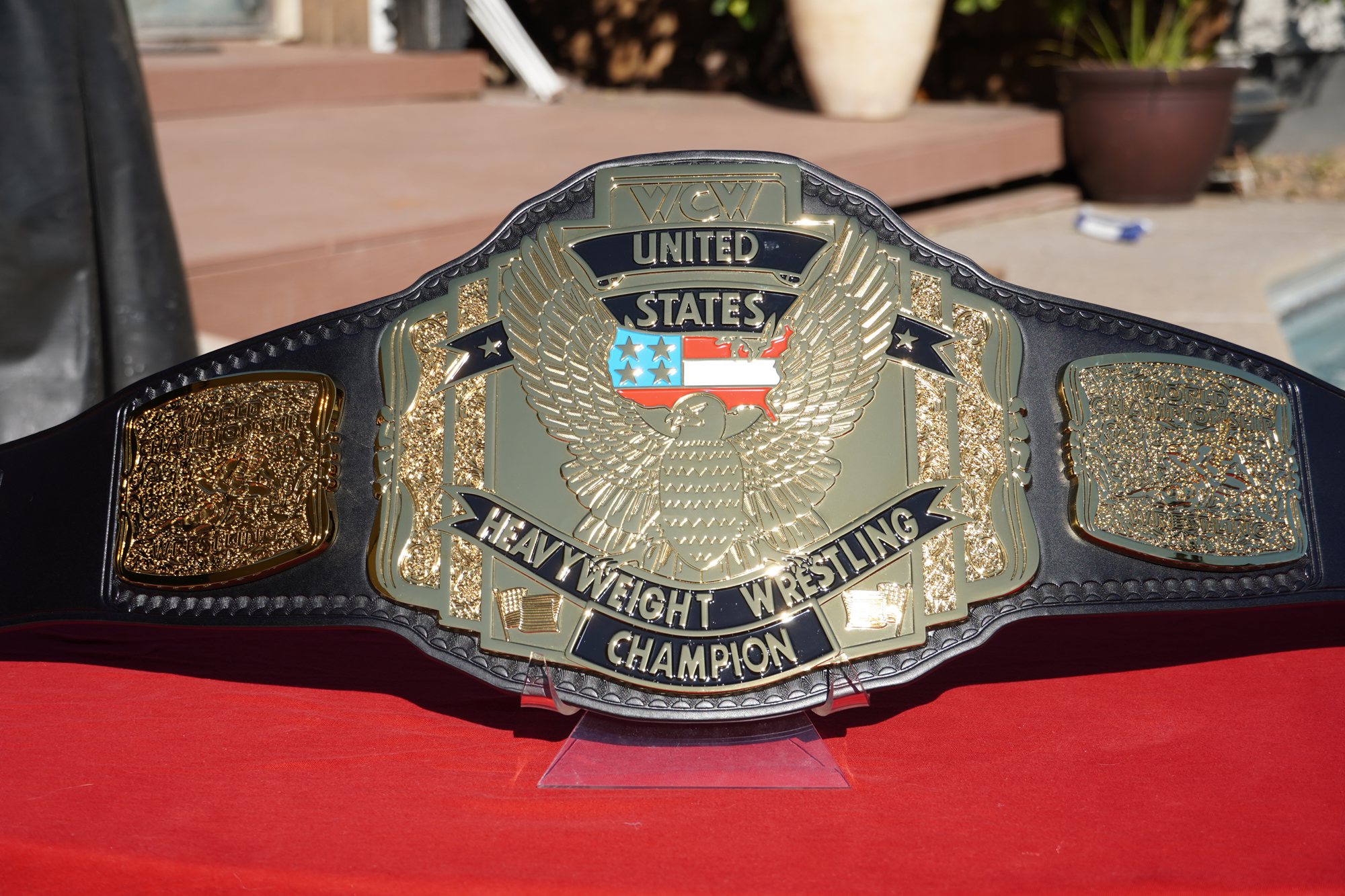 This updated replica of the WCW United States Championship from the WWE Shop is amazing. See the astounding detail of the leafed etching here.

Earlier this year the WWE Shop released an updated replica of the WCW United States Heavyweight Championship. Previously, the Figures Toy Company had the only official replica with 2mm thick plates. The WWE Shop replica has 6mm thick zinc alloy plates with deep etching that brings out all the incredible detail.

There have been several versions of the United States championship in World Championship Wrestling, but this replica is of the final version before the WCW went out of business. The championship was brought back when the WWF created the WCW/ECW Invasion storyline, but was eventually unified with the Intercontinental Championship.

The main plate measures approximately 11.25in x 9.5in. The WCW logo is etched at the top in the a dark gold color. Below the logo are two painted black banners with the words UNITED on the top banner and STATES on the second banner etched in gold.

The center of the main plate has a large eagle with its wings spread out, reminiscent of the winged eagle championship from their competitor, the World Wrestling Federation.

Above the eagle is a small picture of the United States, painted similarly to the US flag. There are three bars instead of thirteen: red, white, and red; and instead of fifty white stars over a navy blue square, there are only four gold stars on the light blue background.

The side plates are identical to one another and measure 4.7in x 3.8in, and are 6mm thick just like the main plate. These side plates feature even more leafed etchings surrounding two grappling wrestlers. The words WORLD CHAMPIONSHIP are etched at the top, and the word WRESTLING is etched at the bottom.

The strap is made out of faux leather polyurethane. This is incredibly stiff material meant to display the belt like a trophy rather than replicate the floppiness of the real leather strap. This strap measures 51.5in x 10.25in and is 6mm thick. A seashell tooling is imprinted on the strap around the three plates, and a simple snap box is stitched around the 5×2 female snaps and 8×2 male snaps. On the backside, the Official WWE Shop Authentic Replica patch is sewn on the strap.

Compared to the original figs toy co replica of the WCW US Championship, the WWE Shop replica blows it out of the water. The thick plates and incredible detail makes this the best official WCW US Championship replica you can buy at this time. The only downsides are that the plates are incredibly flat and the gold coloring is too dark yellow. Unfortunately, both are common issues with WWE Shop replicas. Regardless, I still highly recommend purchasing this WCW United States Championship replica!