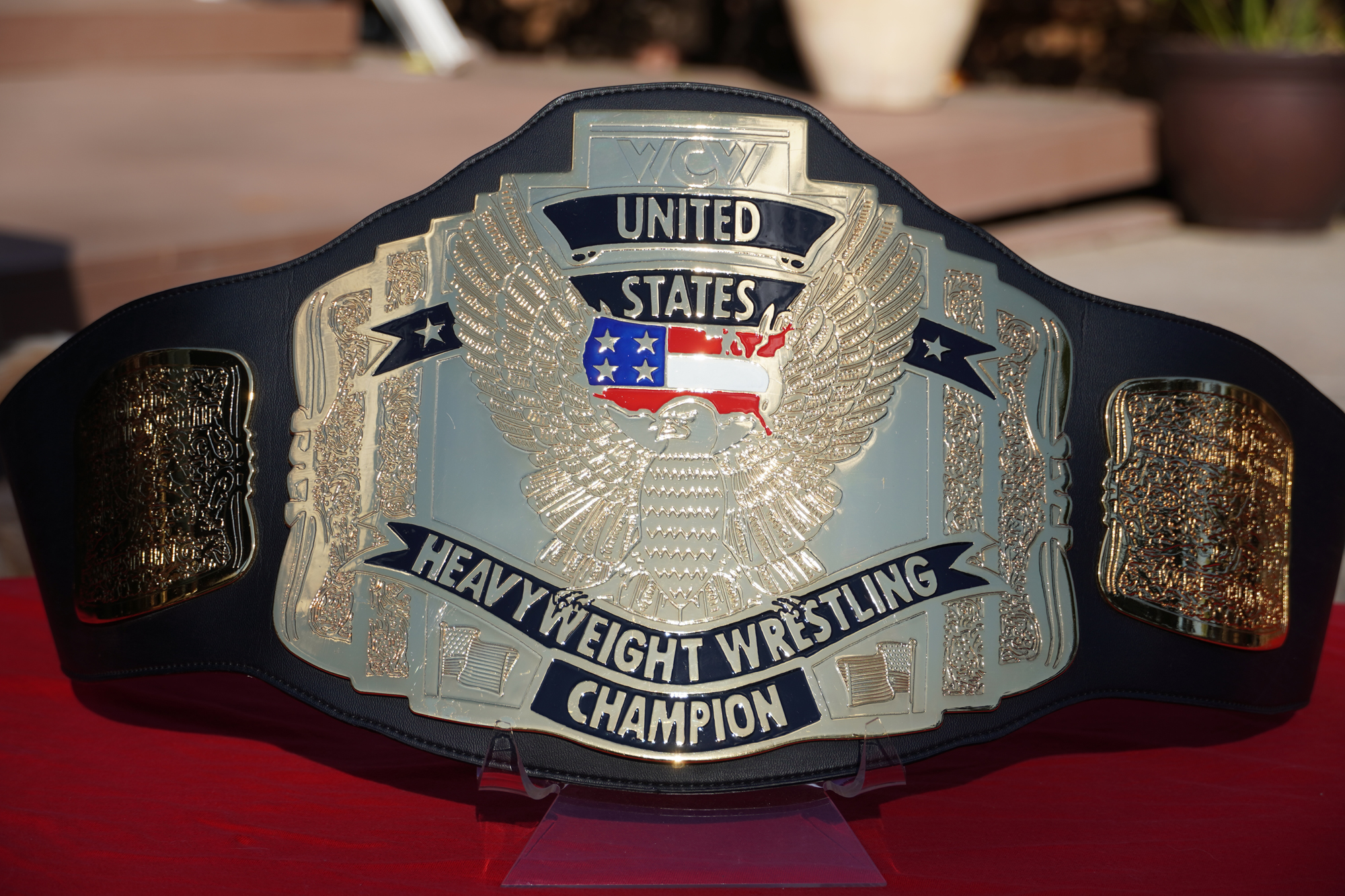 One of the very first replicas licensed by WCW was this United States Heavyweight Championship. See in detail what they sold back in 1999!

This WCW United States Heavyweight Championship replica was manufactured by the Figures Toy Company and licensed by World Championship Wrestling back in 1999. These very first replicas had 2mm thick plates and simple faux leather straps. Although it is one of the very first replicas the WCW made, it was the last version of the WCW US Championship before they went out of business. The championship was brought back when the WWF created the WCW/ECW Invasion storyline, but was eventually unified with the Intercontinental Championship.

The main plate has the WCW logo etched at the top in the light gold color. Below the logo are two painted black banners with the words UNITED on the top banner and STATES on the second banner etched in gold.

The center of the main plate has a large eagle with its wings spread out, reminiscent of the winged eagle championship from their competitor, the World Wrestling Federation.

Above the eagle is a small picture of the United States, painted similarly to the US flag. There are three bars instead of thirteen: red, white, and red; and instead of fifty white stars over a navy blue square, there are only four gold stars on the navy blue background.

The side plates are identical to one another. They feature even more leafed etchings surrounding two grappling wrestlers. The words WORLD CHAMPIONSHIP are etched at the top, and the word WRESTLING is etched at the bottom. Once again, the etching is very shallow on these 2mm plates. It can be very tough to even make out the two wrestlers throughout all the other detail.

The strap is a plain black faux leather strap. There is no tooling and a tiny bit of stitching around the edges. The strap holds 5×2 female snaps on one end and 8×2 male snaps on the other end. The information from the Figures Toy Company and World Championship Wrestling is imprinted on the back of the strap.

See my video review of the WCW United States Championship by the Figures Toy Company below.

While it is cool that this WCW United States Championship replica was licensed by the WCW and is one of the first replica championship belts to be produced by Figs Inc, the plates are too thin and the etching is too shallow to recommend this belt to a normal buyer. Instead, I recommend the updated WCW US Championship sold by the WWE Shop. Those plates are far thicker with deeper etching, incredible detail, and a tooled strap! Hardcore collectors might want this original WCW belt, but those who the best replica for the price should go to the WWE Shop.